On our walk this morning Benjamin asked if we could collect things to make a "pretty thing like we did that one time." So that's what we did. There were a lot more colours around in people's gardens but we didn't want to pick their flowers, so we stuck to wildflowers and fallen petals. We found some colours that we couldn't find in the fall, which I suppose is the way things should be in the spring when everything is coming alive. 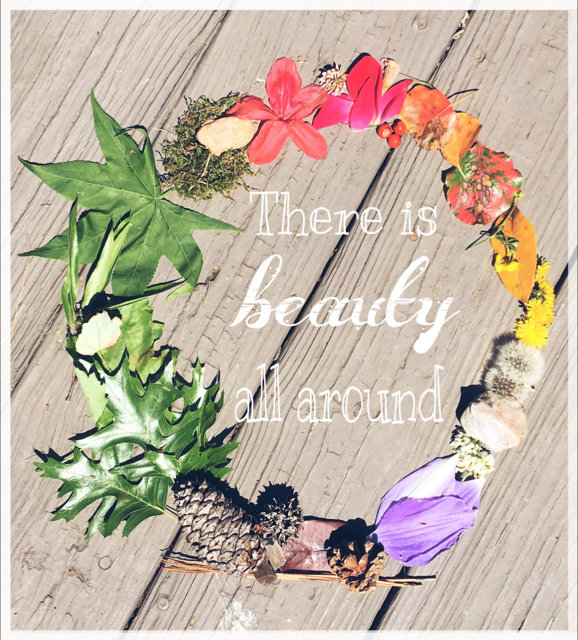 Benjamin's been having trouble listening lately (like, his whole life). No matter what I say he will either ignore me or start talking back. If I ask him to get dressed, I have to ask him fifty times because he'll ignore me the first 49 times. If I tell him there is poison ivy and he needs to stay on the path, he'll tell me "I don't see any right here." If I remind him (again) that we don't take the blankets and pillows off our bed and pile them in the kitchen (?!) he'll say, "Well, that was never a rule before," even though I'm pretty sure that's always been the case.

Today I've been trying to do better because, honestly, I have no direct control over how he behaves (though I do often wish that I did). I can only control how I behave. And so I did my best to take deep breaths and get down on his level and look deep into his eyes and say, calmly, "What was it that I asked you to do?"

And then he shrugged and responded, "I dunno...."

And I said, "Think, buddy. Because I haven't asked you just once. I've asked you..."

"A million times," he mumbled.

I could see the wheels turning in his mind. What was it she asked me to? Let's see. I already ate breakfast and cleared my dishes. I'm trying to play here! I wish she would leave me alone. She said we could go to the park after breakfast because it's not too hot, but I'm still in my pyjamas...oh!

"Get dressed!" he exclaimed triumphantly, as if I hadn't just said those two words fifty times in the past twenty minutes and he had, by some miraculous power, solved a very puzzling equation.

"Bingo. Now, I need you to go and do that. I don't want to have to say it again. You just go and do it and come back to me."

Why are the simplest tasks so difficult for him to carry through? I know he's only four but...I'm really looking forward to the day when not everything is a battle with this child. Do you think there will be one? I don't know.

While we were swinging, Benjamin noticed a couple of somethings on the ground that would have been perfect for our wreath, so we gathered them up and went to reassemble our circle. Some of it had blown away in the wind, other parts had withered and wilted in the sunshine, but a lot of it was still in tact. We added our new items and took another picture. Can you spot them? 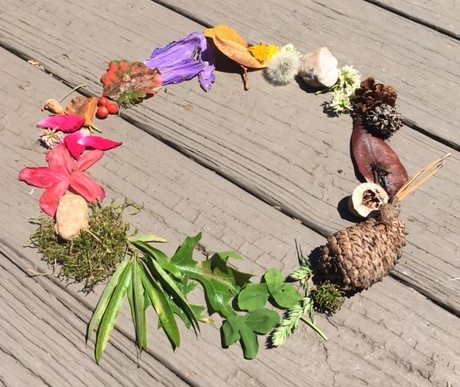 Here they are: half a nutshell and a big ol' leopard slug! 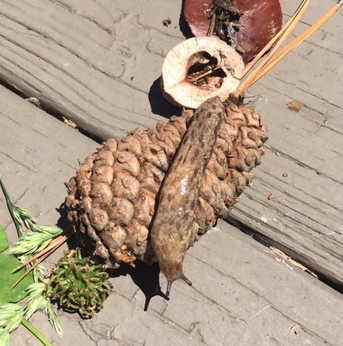 I'm grateful for a child who encourages me to be a better me and who reminds me to look for beauty around me (even if he is incredibly difficult at times)!

Zoë had a fun time at the park as well, of course. We got to hear a lot of her new words along the way:


Every day she surprises us with something new. She asked me for tea the other day—tea! She had a little tea cup from the kitchen toys and, evidently, wanted to have a tea party. I had no idea she knew that word (because how often do we say "tea" at our house (at least to mean "tea," we say "T" plenty, but rarely "tea")?) but apparently she picked up on it one of the many times Miriam hosted a little tea party and chose to whip it out all of a sudden.

Slightly more humorous: our next door neighbours have this (terribly annoying) dog named Precious. Zoë calls it "Preshy." She also calls the little boy next door "Preshy" and I can't get her to understand that that's not his name! I mean, it's not even close...but that's what she calls him.
Posted by Nancy at 4:27 PM