We celebrated Benjamin's birthday throughout the day, starting with presents because we figured we'd have a happier day if he was able to playing with his new things rather than merely anticipating their arrival.

His big sisters gave him some frisbees and Naanii and Bumpa sent a dragon fireball popper toy that was a huge hit. The kids had fun playing with those for quite some time in the morning.

Zoë gave him a package of socks because somehow his socks are no where to be found—all of them! They're just gone. I suppose it's about time he got some new socks, anyway, since his old ones are a couple of years old, but still. How do you misplace all your socks?

When he opened them he said, "What?! Zoë! Mom bought these. You just wrapped them! I don't know if that counts..."

He was happy to have new socks, though. 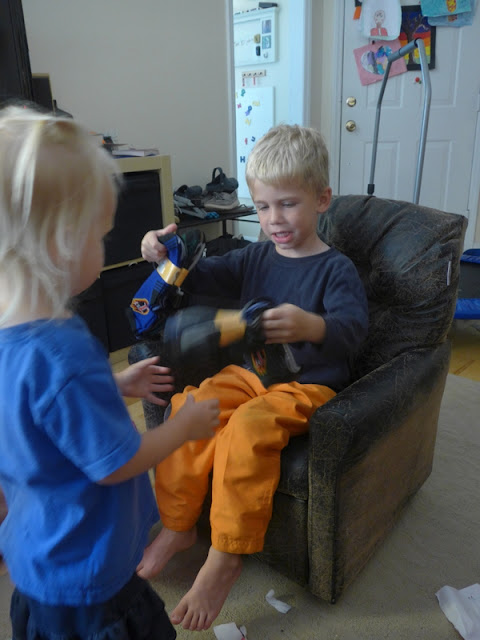 Both sets of grandparents sent him a birthday card and when he looked at the envelopes he said, "Ooh! One's from America and the other one's from...cookie!" 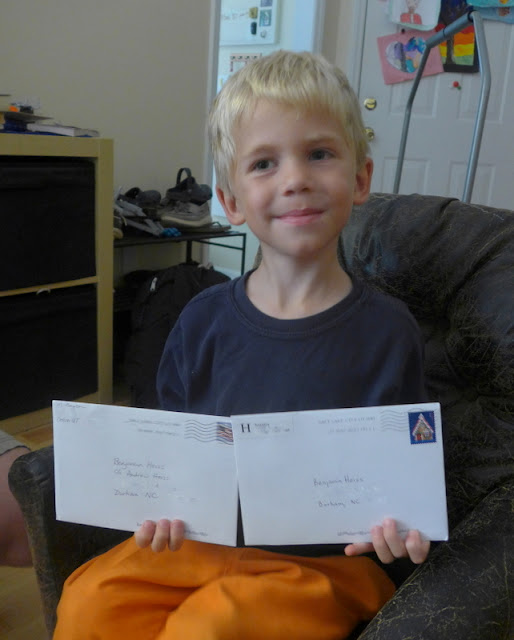 One had an American flag stamp and the other a gingerbread house.

He also got a few Star Wars books from Grandma and Grandpa and from Andrew and me as well. He's quite excited for reading time tonight. 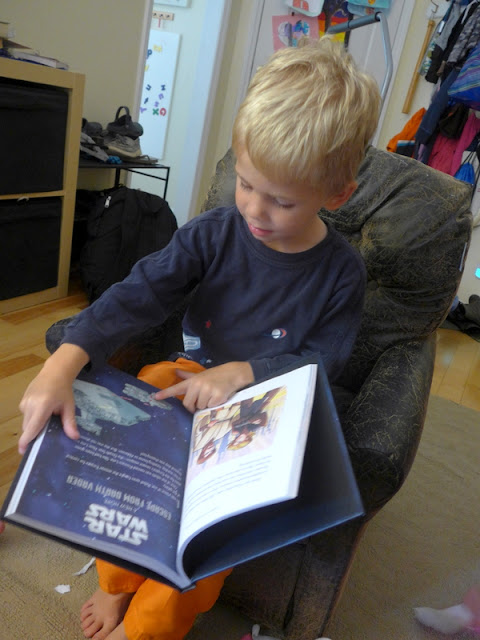 Zoë had a rather emotional time watching Benjamin open his presents, poor thing. She couldn't understand why we'd chosen to shower him with attention. I think deep down inside she wanted it to be her birthday again—because that? That was fun! Watching someone else have a birthday, though? Not so much... 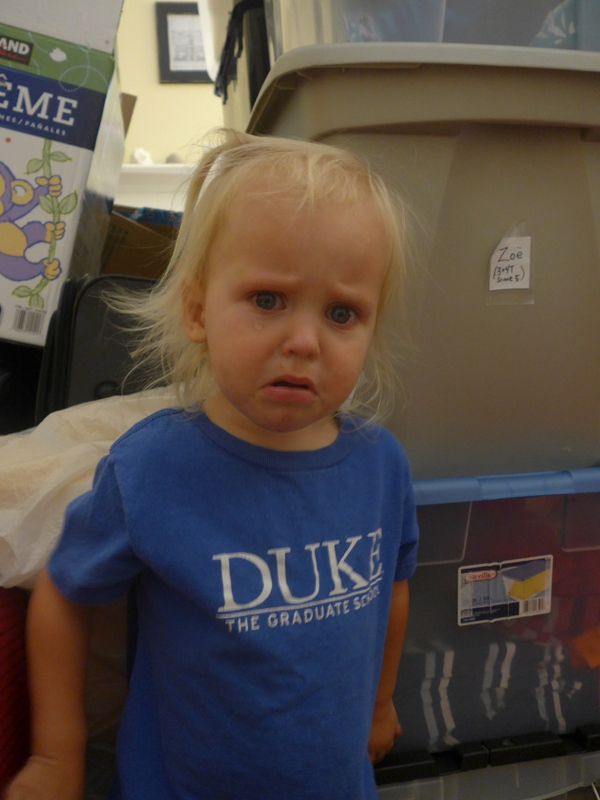 She was so worked up about life that Daddy decided to take her grocery shopping while I finished Benjamin's birthday cake and the older kids played outside. Having her out of the house was probably for the best.

Benjamin wanted a pool cake this year and we started looking for ideas back when I was looking for ideas for Zoë's birthday cake. We picked out a few he liked and saved them for later and I patted myself on the back for saving the leftover fondant from Zoë's birthday cake (I only ever make a half recipe of fondant and have yet to ever use the whole thing in one go) because it would cut down on the amount of work I'd have to do for Benjamin's cake.

That's one of the benefits of clustering children's birthdays, I suppose.

When I went to pull the fondant out of the fridge, however, I was shocked to see that it was mostly gone. There was a big chunk of blue fondant and a tiny bit of orange and white, but the pink, purple, green, and yellow were all gone.

"What happened to the fondant?" I asked a roomful of clueless children.

"Someone has been eating the fondant," I lectured. "I guess it doesn't really matter who but I just want whoever it was to know that I was saving it for Benjamin's cake and now I don't know what I'm going to do because I really don't want to make more but blue fondant isn't really useful against blue frosting..."

Andrew wandered into the room during my lecture and started acting a little sheepish.

Agree to disagree. Fondant isn't my favourite thing to eat, but it sure can make decorating a cake easy! Even though my plans were thrown off track I figured out a solution—because if there's one thing we tell our children daily it's that "there's always a solution." In fact, when Benjamin went to Andrew with a problem (his shirt was inside out), Andrew said, "Why don't you see if you can figure out a solution? You're five now!" Benjamin replied, "Can't I start figuring out solutions when I'm six?"

My solution was to dye some of the blue fondant purple and green and to mix the remaining bit of white with some orange to make a peachy colour. I saved some of my icing and dyed it yellow instead of using yellow fondant for the hair. It wasn't ideal but it worked well enough.

Here's the finished product (based on a cake we saw here): 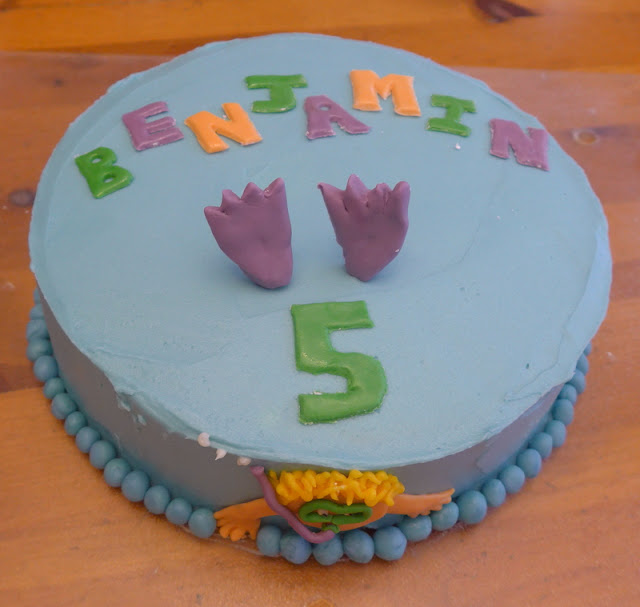 The girls helped me cut out the letters for Benjamin's name and also rolled out some of the balls for the border (out of leftover blue fondant). It's not perfect, but Benjamin loved it. 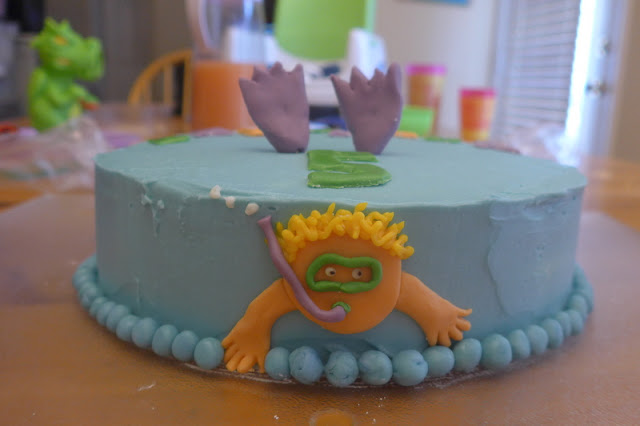 We spent the afternoon at the swimming pool. I had originally planned to have his friend party this Saturday, but then I broke my toe and I just didn't know that I'd be up for it (good thing we hadn't sent the invitations out yet). Having a broken toe is fine. Being pregnant is fine. Throwing a birthday party is fine. Doing all three things at the same time seemed like a bit too much, so we decided to put off the birthday party for a while since, you know, that was the only thing put-off-able at this point in history.

Sadly, Benjamin's little friend Jay fell into a campfire this weekend and has been banned from swimming until his burns heal (which will take a good number of weeks—his poor little legs are completely bandaged up). He really wants Jay to come to his party...but he's also dead set on having a swimming party...so we're going to have to figure that one out...

Anyway, I took the kids—just mine—to the pool for about four hours while Andrew worked on his dissertation. I went ahead and got in the water this time because my skin has more or less grown back and my toe, though still painful, is no longer one big festering, oozing mess.

Andrew showed up with pizza and cake around 5:30 and we partied hardy for another hour or so.

Here's Benjamin with his cake: 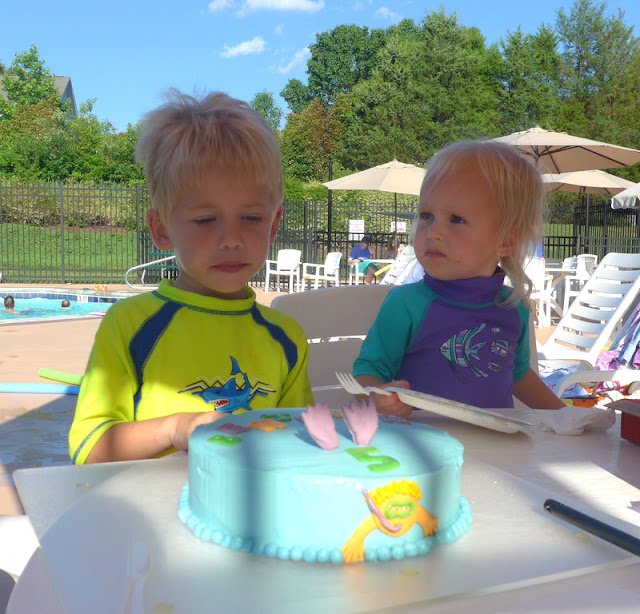 It was so sunny that it was hard to see what I was taking pictures of, so this picture is kind of randomly framed, but I just love the way Benjamin is staring adoringly at his little sister here: 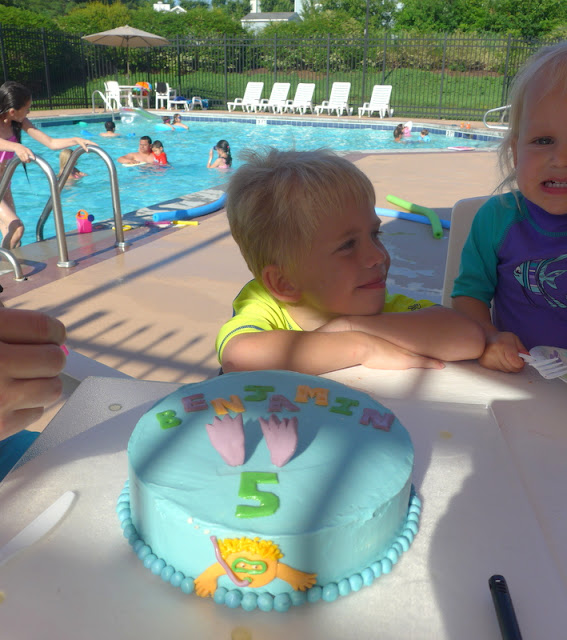 This picture is too great for words... 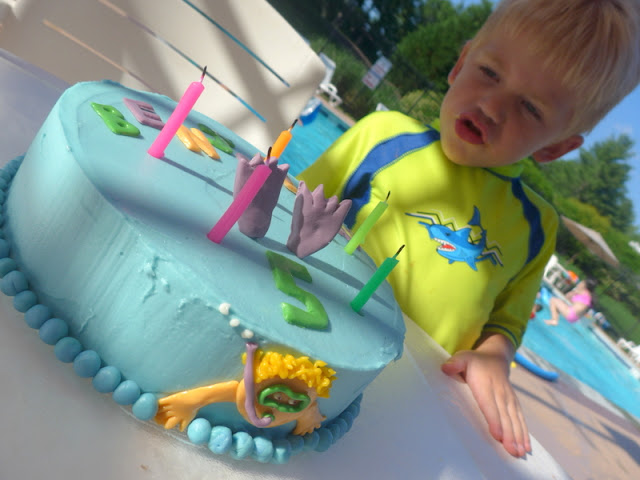 Here he is actually smiling with his cake: 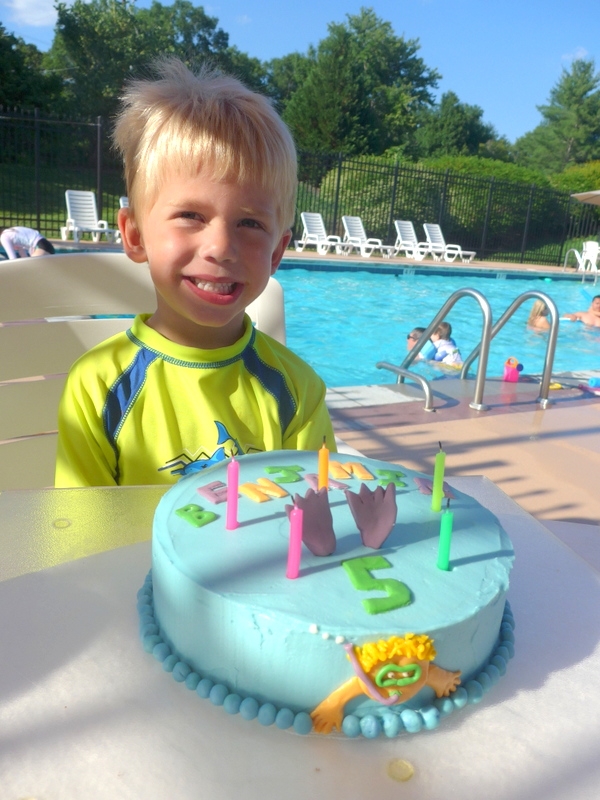 And here he is feeling impatient while Daddy struggled lighting the candles. It wasn't even very breezy but the wind kept snuffing them out as quickly as Andrew could light them. I'm not even sure they were all lit by the time we started singing to him and certainly a couple had been extinguished by the time he went to blow them out, but he had a great time blowing all over that cake, anyway! 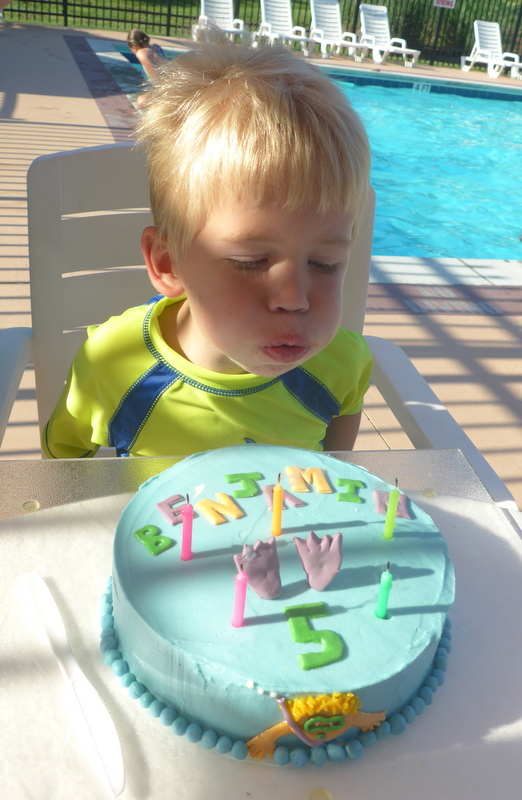 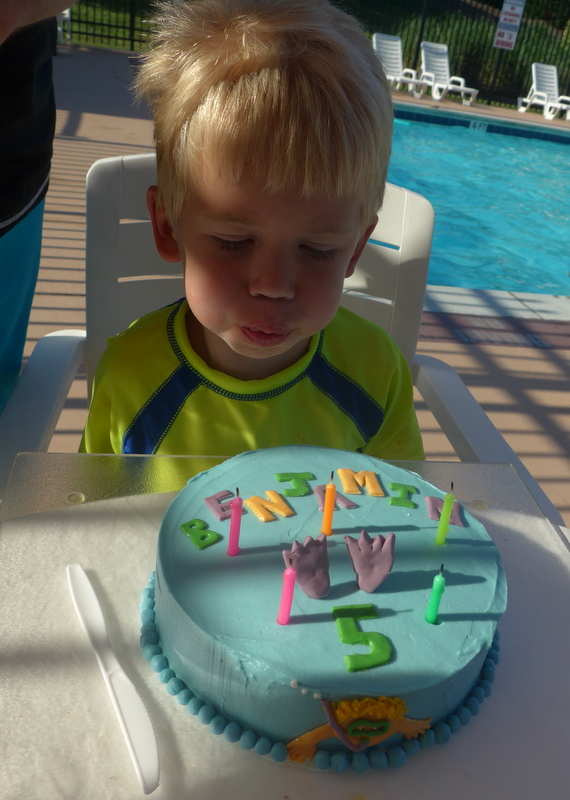 Benjamin got the first piece—he took a wedge with his likeness and the number five on it. Rachel and Miriam each asked for a flipper. Zoë didn't care what she got as long as she got cake.

After pizza and cake it was Daddy's turn to swim with the kids, which involved a whole lot of throwing (or, in Zoë's words, flying). I've once again been banned from lifting anything over 20 pounds (the joys of high risk pregnancies), which has meant no mommy-powered flying at the pool (so boring). They've been enviously watching other parents rough house with their children at the pool and were thrilled to finally get tossed around a little bit. 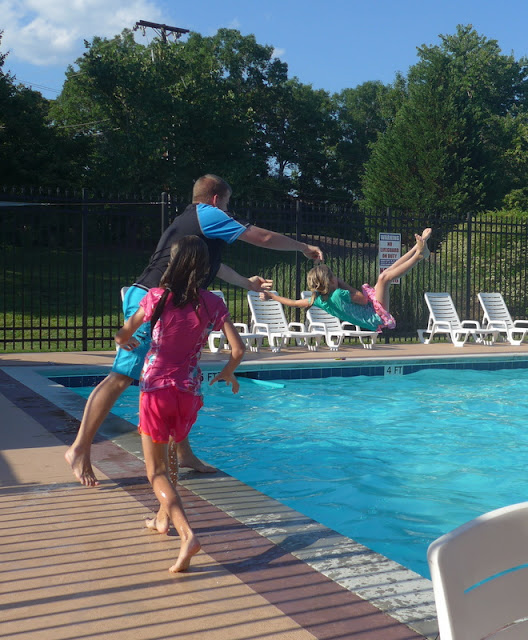 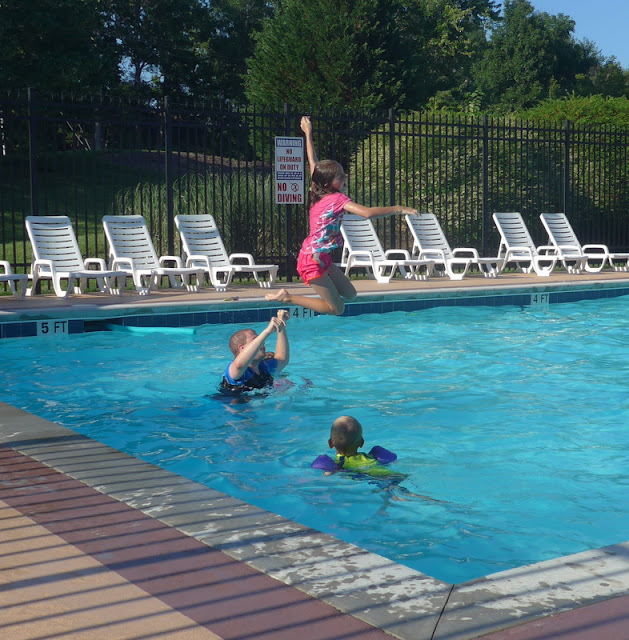 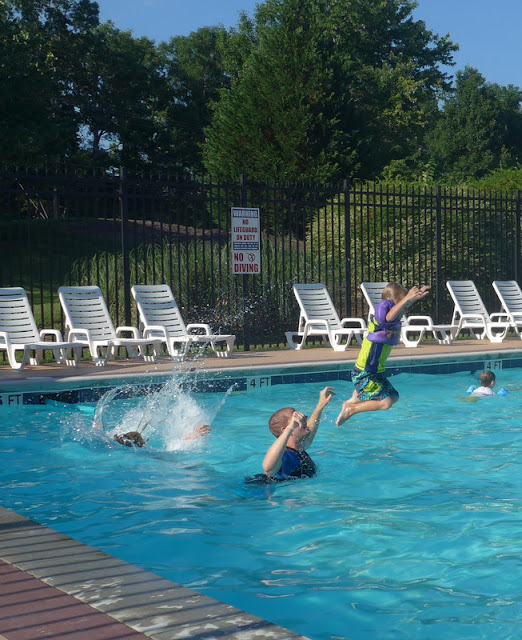 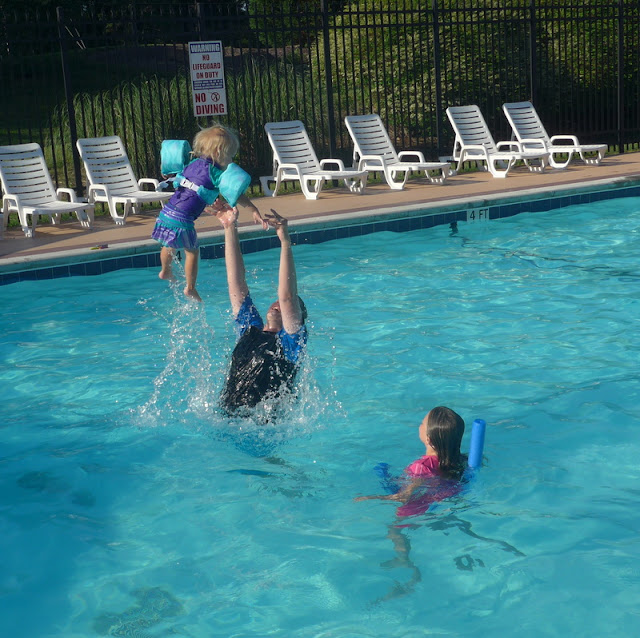 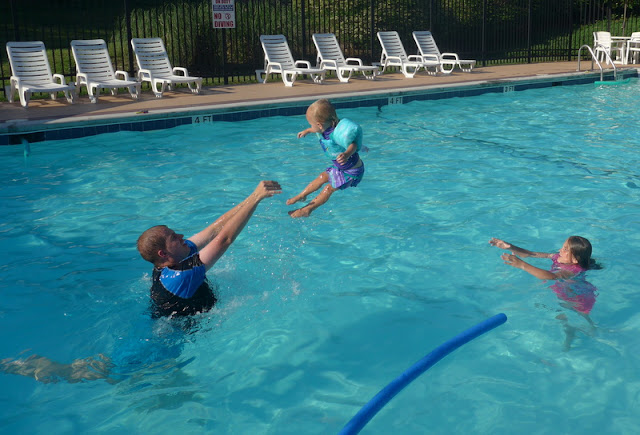 And a funny picture of Zoë wrapped up in a towel, feeling very frustrated that she can't free her arms: 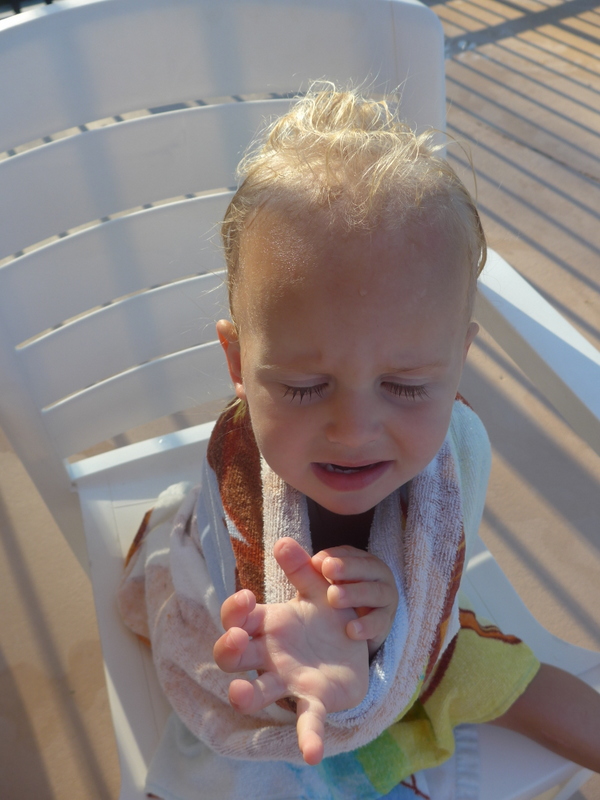 Spending five hours at the pool was a rather tiring way to ring in Benjamin's fifth year (or is this his sixth year?) and when we came home we were all dragging as we got ready for bed.

At one point Benjamin groaned lethargically from the couch, "Phew! I am so exhausting!"

Ordinarily he's the one to wear us out but today the tables were turned and I think we succeeded in wearing him out (along with maybe giving all the children a mild case of heat exhaustion (just kidding (maybe))).

It sure was fun to get to celebrate our only-for-now-but-not-for-long little boy!
Posted by Nancy at 8:47 PM