When we told the kids we were having a new baby, one of the very first things they requested was to feel it kick. Although I had felt a few flutterings, I explained to the children that the baby wasn't quite strong enough to feel his kicks from the outside quite yet. A few weeks later, however, there was one morning when the baby was kicking up a storm, so I called the kids in to feel him moving.

I thought they'd be more excited about it, but they honestly weren't that excited at all.

Miriam was the most animated, yanking her hand away from my stomach and squealing, "Ew! It feels like milking a cow!"

"Feeling your little brother move feels like milking a cow?"

"I don't think you're entirely qualified to make that comparison," I sniffed, "Having never milked a cow."

No one has asked to feel the baby move since then (it's been weeks), but perhaps they'll be more interested in feeling the baby when he starts to really wobble around in there.

Today I took Rachel and Miriam with me to my appointments: an ultrasound, a doctor appointment, and a 17P injection. They were quite interested in tagging along and I thought it would help dispel a couple misconceptions that had been circulating around our home, namely:

1) That "ultrasound" means the doctor cuts Mommy open to check on the baby
2) That the injection goes into my bottom because, once again, it grants the doctor access to the baby, who is the real recipient of the shot (I'm just the front door)

No matter how many times I have explained these things, no matter how many YouTube videos I pull up, the rumours persist. Rachel, I think, understood mostly everything (she got to operate an ultrasound machine at one of her STEM Saturdays) but Miriam and Benjamin just could not seem to wrap their little heads around all this new information. But Rachel's interested in this sort of thing, so she and Miriam got to come.

I considered taking Benjamin but waiting quietly isn't exactly his forte yet and there can be quite a lot of waiting at these appointments, so I brought the two who could bring along nice, thick books and behave self-sufficiently for hours at a time. Zoë was never in the running to accompany me.

Anyway, the appointment went well. The baby was still uncooperative for the ultrasound. He was covering his face with his hands and had his head tucked deep inside me and didn't want to move. I had to lie on my side to convince him to wiggle a bit, but he remained stubbornly comfortable right where he was. It took a little doing, but we finally managed to get a profile shot (with his hand just above his face) and we made sure he had eye sockets and a nose and whatever else they were looking for—he does: 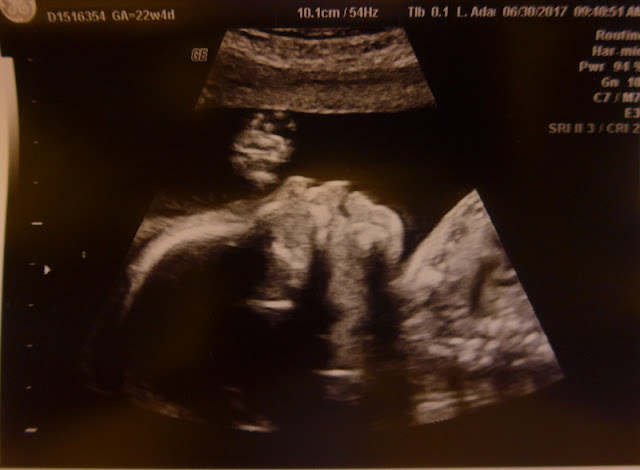 So, the baby is fine and growing well and now Miriam knows that I'm not being cut open every month or so to check on this little guy. She also knows that my 17P shot goes in the fatty part of almost-my-hip, not through my bottom to the baby.
Posted by Nancy at 2:09 PM