It felt like a billion degrees today, though it was only in the high 80s, so we were quite surprised when we arrived at the pool and found we had it—in all its lukewarm glory—to ourselves. 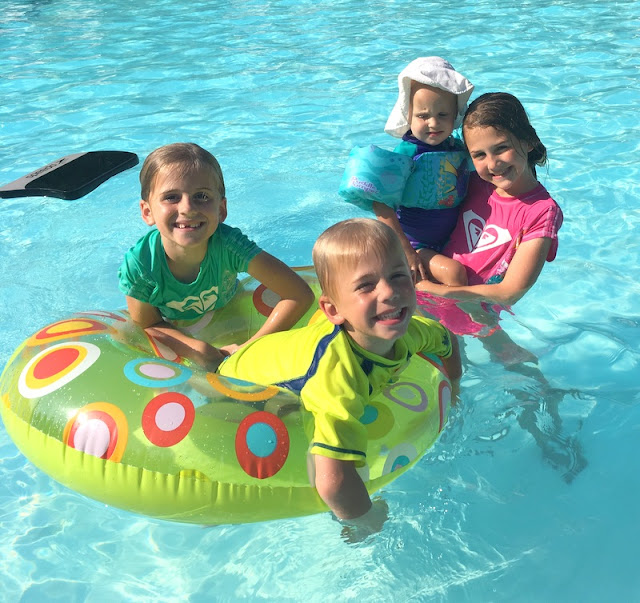 A few families came towards the end of our stay, but for the most part we were all alone, and it was lovely. The kids played so nicely together, which was a wonderful thing after the kind of day we had at home. I was afraid the children were going to eat each other alive!

Rachel and Miriam miraculously palled around and also spent some time playing with Zoë while I worked with Benjamin. I've been relatively lax about swimming lessons this summer, after deciding I wasn't going to be teaching lessons on the side. Sometimes the work of keeping an eye on all four kids is work enough, but today I decided to do a little extra work since there were no other children to distract my distractible boy.

He's fairly proficient in the pool but hasn't been quite brave enough to swim—floatie-free—in the deep end yet this season. So that's what I made him do. I made him hold onto my fingers and helped him sink down until his feet hit the bottom of the four feet, which "wasn't so deep!" We repeated that in five feet, which he also found to be not quite as deep as he thought. Then I made him glide from me to the wall, assuring him that I'd stay beside him in case he needed me (which he didn't). Soon I had him jumping in and swimming out to me, or swimming to the ladder to climb out.

He was quite proud of himself, and rightfully so!

Here's a little video* of him jumping into the deep end (it was after a long round of jumping so he was getting tired, which is why he announced he'd had, "Enough!" at the end (and although he knows how to use "big arms" his default "stroke" is a front glide; I keep trying to get him to use his arms more but he won't unless I stop him from swimming to remind him that he's got arms for a reason)):

It was good to finish out our day on a good note—you know, actually enjoying each other.

* One day I'll remember to turn my phone sideways while taking videos...
Posted by Nancy at 9:06 PM