The children spent the morning fighting until I lost it with them and cried, "It is my birthday! I have no presents. I have no cake. It's raining and Dad took the car so we can't even go anywhere. The least you can do is get along for a little while!"

They tried a bit harder after that, but it was still a little bit of a letdown of a birthday.

When I was on swim team we'd occasionally (at least once every summer) have what was called "Hell Week." You can probably imagine what that entails—a whole lot of sets and drills that no one really wants to do. I think it was meant to push us to our limits. Or to help us appreciate the next week when the coach went back to normal instead of the crazed coach of fury from Hell Week.

It's not my favourite phrase, but it is what it is.

Andrew is in Dissertation Hell Week(s) right now. He's writing and writing like he's running out of time because, quite literally, he is. He has everything planned out and outlined and is just picking off sections and pounding them out. He's gone before we wake up (unless someone has a doctor appointment), he doesn't get home until bedtime, and then once the kids are in bed he's back to the old grinding stone until well past midnight.


He sends me sections as he finishes them and, in theory, I edit them and return them (though I'm a little bit behind).

Anyway, there's no rest from the schedule because, well, it has to get done. That means we celebrated my birthday without Andrew. It also means I'm missing book club.

Oh, also, I have gestational diabetes so there weren't going to be any birthday treats. The kids were dreaming up cake ideas—like stacking whole wheat crackers and covering them with cream cheese, or piling up carrots and sprinkling almonds on them. And I was like, "Please just don't do anything," because sometimes something is worse than nothing. They were pretty upset about not getting a treat on my birthday and, frankly, I felt like I deserved a treat after the day we had, so I broke out a box of cookies from the pantry.

15g of carbohydrates in one cookie, which I ate before dinner and counted it in with the rest of my carbs, filling out the menu with pork chops (which I cooked in the sous vide all by myself (but don't worry—Andrew put the meat into ziplock bags for me last night so I wouldn't have to touch anything (I hate raw meat))) and fresh green beans.

This is what a birthday looks like with diabetes: 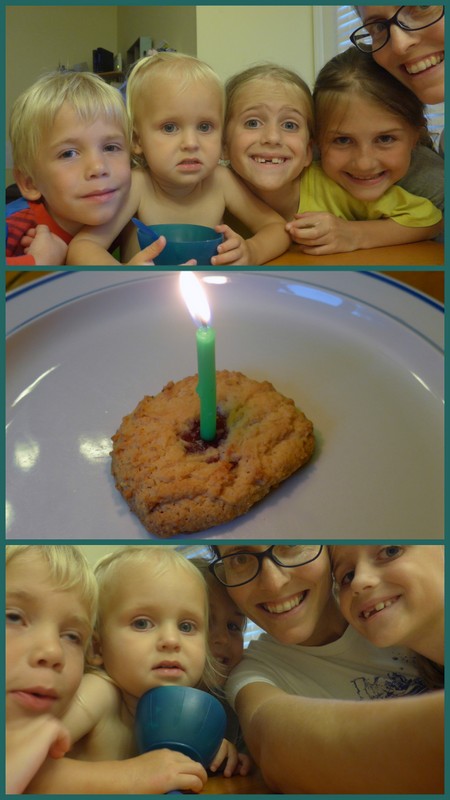 Much wow. So yum.

We all enjoyed our cookie (I gave each of the kids one, too, of course) and our dinner and are just getting ready to head outside for our post-prandial birthday walk. Got to burn all the sugar from that cookie out of my system. *sigh*

(Next year I'm having more than just one cookie for my birthday; just a head's up.)
Posted by Nancy at 8:05 PM