While going through Rachel's end-of-year papers, I came across a rough draft of a poem about mothers (I assume it's a rough draft because it's similar to but not the same as the one she wrote in the Mother's Day card she gave me). 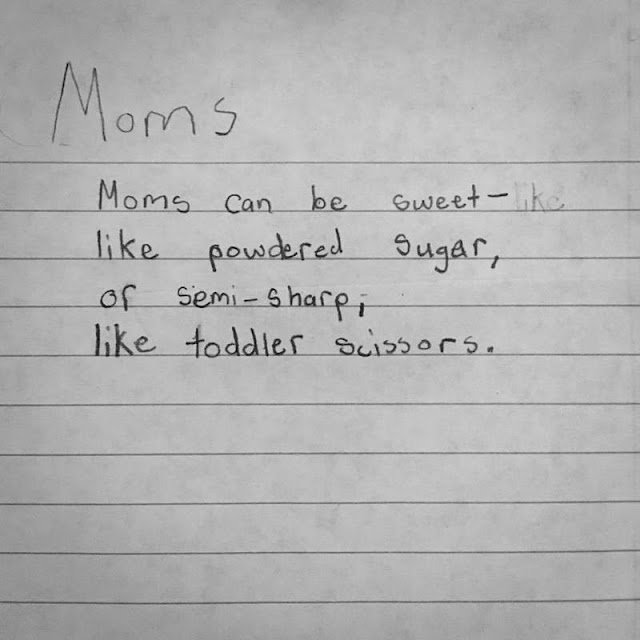 Today, unfortunately, was a toddler scissors kind of day. I felt like the kids fought all day and I didn't do a great job at remaining level-headed and we were all mostly miserable for most of the day. We did end up at the pool eventually—and we had fun together—but most of the day was just...ugh.

At 11:30 I asked them to clean up their rooms—quickly—before lunch, so we could head to the pool for the afternoon.

Their rooms weren't even that messy so I honestly don't understand what the big deal was...but whatever.

I'm reading The Book Thief right now. Rachel called dibs on reading it first, but then she started reading something else, which pretty much surrenders her spot in line. I just finished part four and tonight—while I was "ditting" by Zoë while she fell asleep...twice (a note on that, when Zoë is talking about herself she'll say, "I sit. I sit." But when she uses the word in any other context it's "dit." "Dit, momma, dit!")—I was touched by some words on parenting. Or not parenting, so much, but on growing up.

Growing up is a difficult thing to understand because, I'm realizing, you never quite stop doing it.

Even as I'm watching in awe as all these little people are growing up right before my eyes, I'm still figuring out how to grow up myself.

This isn't from The Book Thief, but it's a pertinent quote on the same topic that I came across today:


“It's not only children who grow. Parents do too. As much as we watch to see what our children do with their lives, they are watching us to see what we do with ours. I can't tell my children to reach for the sun. All I can do is reach for it, myself.” —Joyce Maynard.

Now onto The Book Thief quotes. On page 219, Max is lamenting his failure to keep up his musical studies. "She kept only the one instrument but gave up on me not long after I resisted learning. I was foolish."

And on page 216, Hans explains away his son's behaviour saying, "After all...a boy sometimes has the right to be stubborn."

I know the book is about Liesel, but I'm pretty sure Hans is my favourite character. I really appreciated his fatherly wisdom today and I need to remember more often that when my children resist learning they aren't necessarily being foolish—they are merely being children—and that sometimes children have the right to be stubborn.

I suppose then also need to forgive myself when I take too long to learn things.

On the flip side, before I read these words, we had a Family Night lecture lesson on Saul/Paul and kicking against pricks, and why we should take a gentle prodding rather than hold out until we're struck blind...or simply run out our mother's patience (such as, but not limited to, when your mother asks you to clean your room).

So I guess it's fine to be foolish and kick against the pricks—because that's what mortals do—but it's better to willingly learn than to resist learning. There are, after all, a little thing called consequences...
Posted by Nancy at 11:49 PM