Today I was making dinner and Zoë was watching. She loves to "see!" while we work in the kitchen, which is both a good thing and a bad thing. It's good because observing and doing is how children learn about the world. She loves to fetch spoons and hot pads or whatever we might need while we cook. The downside, of course, is that she's a limit-pushing toddler.

When I took the pan off the stove to take to the table, I reminded her it was time to climb down from her stool and cautioned, "The stove is still very hot. Don't touch!"

She looked at me with defiance, stuck out one little finger, and touched the stove—just to ensure I wasn't making stuff up.

She crashed to the floor from her perch, wailing about "HUUURRRRT!"

We ran her finger under cold water until her "ow-me" felt "kay" again. She hopped down and went to play with her siblings (who were busy in the living room creating a masterpiece out of DUPLO), only to run back to me minutes later screaming, "HUUURRRT!!! More la-lo! More la-lo!"

So I helped her hop back onto her stool so she could run some more cold water over her finger. 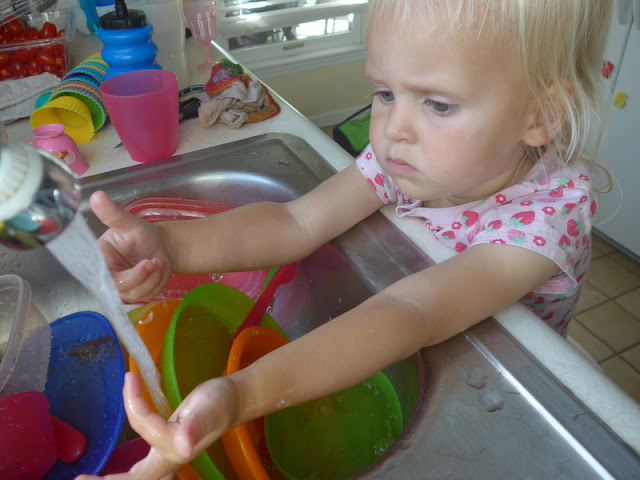 I tried to get a picture of the tear running down her face, but kind of missed: 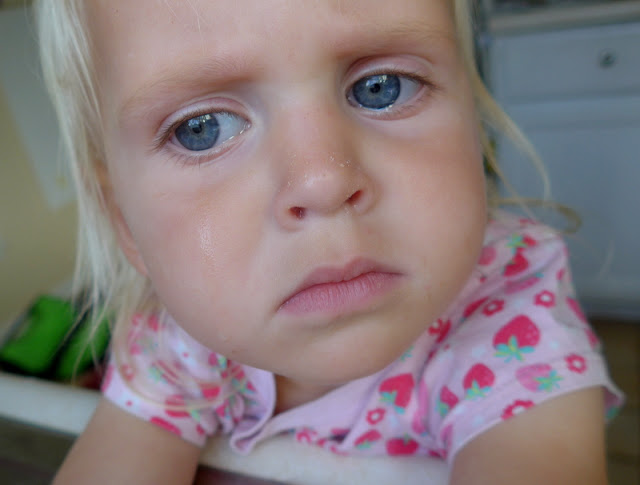 And here she is singing about the merits of using cold "la-lo" to treat minor burns: 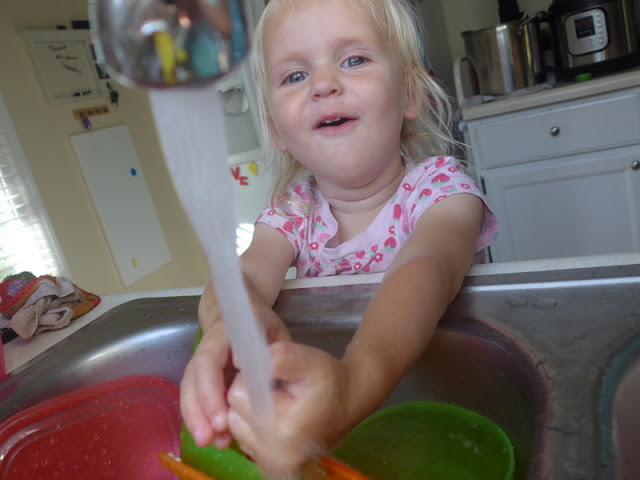 She demanded the same treatment several times before dinner was all the way ready. After dinner we went to the pool, which helped her forget about her finger (probably because it was like soaking it in cool water). She had a great time until she got overly excited about the prospect of a warm shower (we stayed until the pool closed—9 PM—so we were getting a little chilly in the evening air) and slipped on the deck, giving herself a little goose egg. Poor thing.

She was in pretty good spirits by the time we got home and when she saw Andrew's scooter in the driveway she burst out her longest sentence ever: "MY DADDY MORE HOME!"

She was quite happy to see him. He's been squirrelled away in his office on campus so much recently that the kids haven't seen much of him, though to be fair he left a little late for campus this morning because he stayed home with the kids while I went to my prenatal appointment. Zoë had to verify that I'd be "gack" at least a dozen times before she let me leave. "Momma—gack!" she demanded, jabbing her little pointer finger at me like she meant business (the same little pointer finger she'd later burn on the stove). "Of course I'll come back," I reassured her.

It's nice to know she likes us so much.

And while I'm listing childhood injuries...

Benjamin had a little run-in with a door last night, courtesy of his eldest sister bursting into the bathroom to blow up at him about what was essentially a non-issue.

Short story long, we were getting ready for bed and I asked "any child who has not yet brushed their teeth to go brush them." The three big kids raced off to the bathroom. I left Zoë sitting happily on the couch with a book while I went to test my blood sugar.

I was just getting ready to pull the trigger on my lancing device when Benjamin walked in, dragging Zoë behind him.

"What are you doing?" I asked.

"I already brushed her teeth," I said.

My next question: "Have you brushed your teeth?" was followed with a look of shame so I continued, "Then you better go and do what you were asked to do."

Benjamin left to brush his teeth. Zoë followed him. I got everything ready to test my blood again but just as I pulled the trigger there was a big commotion in the kids' bathroom and I really stabbed myself somehow (I guess I jumped into the prick when I usually tend to pull away?) so when the kids filtered into my bedroom to tell me all the sides of the story, my finger was oozing out blood.

Rachel came huffing in first, with Zoë on her hip.

"Benjamin came into the bathroom to brush his teeth but I didn't want to brush my teeth while he was in there so I decided to brush Zoë's teeth but while I was leaving the bathroom Benjamin closed the door and it hit my heel."

"And he's screaming because..."

Because she turned around and barged back through the door to yell at him, catching his toe in the process. So now his toe basically matches mine, except only half of his toenail ripped off and I don't think he broke anything because it didn't swell up like mine did and he was totally fine today. No limping or anything. But there was a whole lot of blood and tears.

It was fun trying to comfort a screaming boy and bandage up his toe while sucking on my own finger to stop it from bleeding. All very sanitary, I'm sure.

Rachel was stuck in a "but he, but he, but he," victim-blaming type attitude so I gave her a lecture about how something can be an accident but there can still be an offending party which can still be found culpable. "You might not have meant to hurt him when you opened the door, but you did and now he's sitting on my lap bleeding and crying and you're standing there trying to make it not be your fault. But it was your fault. It may very well have been an accident but, nonetheless, you hurt your little brother and maybe you should do something to help him feel better."

Next up was a lecture about how if both of them had just done as they were asked and brushed their teeth without worrying about Zoë's teeth or fighting over positions at the bathroom counter none of this would have happened in the first place.

I'm beginning to feel we need one of those "days without accidents" signs for our house. Seriously. 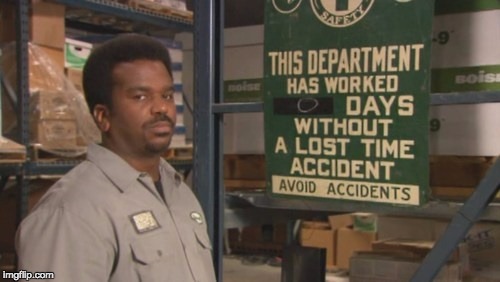