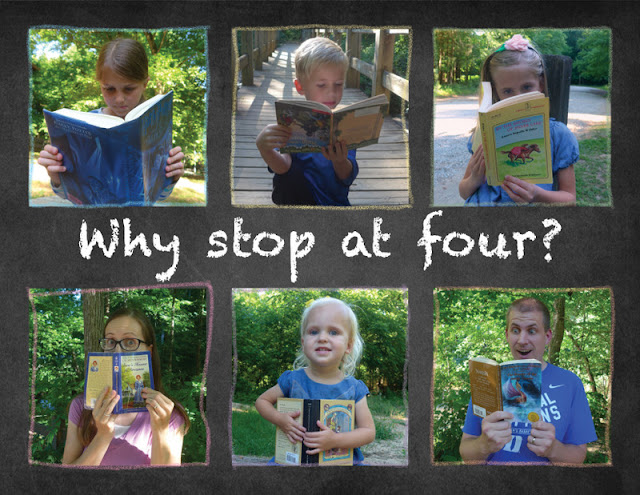 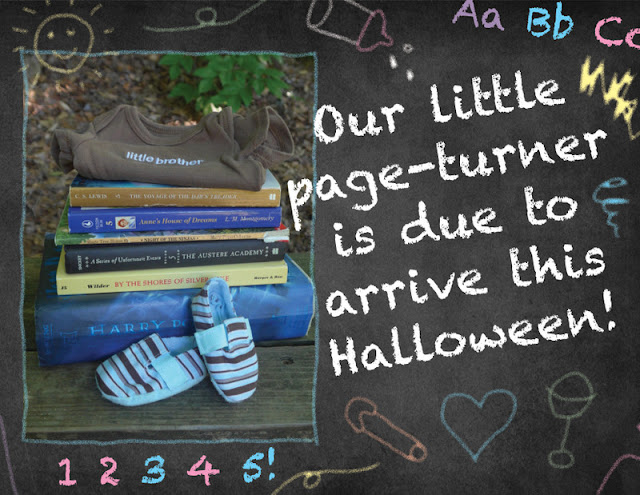 One evening in February I approached Andrew and timidly asked, “What would you say if I said I thought I was pregnant?”

“It’s just...we’re kind of in over our heads already and earlier you said that you didn’t want another baby…”

“Then we’ll have another baby right now. It’ll be fine."

“That’s all?” Andrew asked, laughing off my explanation.

He brought home a pregnancy test the very next day (February 9th) and it was negative. A few days later I started spotting (and I kept on spotting), so evidently I wasn’t pregnant after all. Phew. That first postpartum cycle can be a real doozy (and the next few, too, sometimes) until your body figures out all those hormones again (more or less). Eventually my body would get stuff straightened out and all would be well.

Five days later—on Valentine’s Day—Andrew’s sister Emily announced that she was expecting...again...and was due in September...again. So Gavin is three, Maren just turned two, and Logan will turn one around the time her baby arrives. I was happy for her but was surprised to find tears springing to my eyes.

I choked them back and forced a smile as I squeaked out what I hoped was blithe and supportive, “Yay! Congratulations!”

I couldn’t even understand why I was so emotional about it. We weren’t sold on the idea of having a baby “right now,” anyway, and had both felt kind of relieved when the test was negative. We have so many pending transitions coming up; throwing a new baby into the mix would be insanity.

Five days later I was still spotting. Andrew was due to go out of town for a week. I was going out of my mind. Fish or cut bait already!!!

“What if I told you I want to take the other pregnancy test?” I asked Andrew (those things always seem to come in packages of two; and it wasn't so much that I needed his permission as it was that I needed his support). “I don’t think I’m pregnant but my period still hasn’t started and I just want to rule it out before you go out of town...”

So I took another test and together we watched in stunned silence as two solid lines appeared.

(Unrelated to anything in this post, but we've found ourselves slipping in inappropriate prison jokes with ever increasing frequency; like a coping mechanism?)

We decided to keep it to ourselves for the time being. There was still a lot of coming to terms that we had to do. Five. Five! FIVE! Five children!?

When I calculated my due date based on my symptoms, I came up with the due date of October 25th. Andrew looked at that and burst out laughing. We have a (very unintentional) habit of doing that (because babies just come when they come).

Miriam was due October 27th. She was born October 25th.

Benjamin’s original due date was July 20th (but they moved it up to July 18th because he was measuring “big,” but I still hold that he was due on Rachel’s birthday). He, of course, wasn’t born anywhere near her birthday. He was born on June 3rd.

Zoë was due on June 2nd, about as close to Benjamin’s birthday as she could get. She was born May 23rd.

Well, no. When I went in for a dating ultrasound I was a bit distressed to find out that we were a week behind where we thought we were, so this baby is actually due on Halloween. But I don’t think they’ll let me go full-term (because there will be complications with gestational diabetes, I’m sure) so they’ll likely recommend an induction by 39 weeks if the baby isn’t born before then (but not too much before then), which just happens to be...October 25th.

Benjamin was the first one to realize that something was up. As a spontaneous (and rather rough and tumble) hugger, he probably tends to attack my midsection the most frequently.

On April 10th I had my friend Marian’s kids over while she went to a prenatal appointment, which got the wheels in Benjamin’s head turning. The next day I took the kids on a picnic to the park and over sandwiches Benjamin casually remarked, “Why does Baby Jay's mom get to have a new baby? Because she's pregnant. And that's not fair. You're not pregnant. We're not having a new baby. You're just getting fat.”

“Life’s not fair,” I reminded him, leaving out so much information that it almost felt like lying.

I was 11 weeks on April 11th, hardly far along at all, yet far enough along that my body was seeming to thwart all my efforts at withholding information. I was already carefully selecting my wardrobe to de-accentuate my more-rapidly-than-I’d-like swelling mid-section.

This is my fifth pregnancy and my body has a mind of its own.

On April 27, Andrew made Navajo tacos for dinner, which were delicious. I told him that he could make dinner or I could make dinner, but if I made dinner it would be spaghetti (again) with red sauce (again) because that’s all I can ever think of to eat (and doesn’t it sound good?).

We all ate too much, I’m sure, because it was just so more-ish, though technically I only had two “scones” (fried bread), which isn’t so much. Ignoring the Toblerone sitting in front of me right now (Andrew brought me back so many treats from his trip to Utah; I think he felt guilty for leaving me all alone with the kids in the middle of spring break when I was sick and pregnant and, on top of that, sick with sickness), I’ve been trying to eat kind of like I’m diabetic—keeping to smaller, more frequent meals with a well-balanced carb-to-protein ratio.

After dinner I was sitting on the couch waiting for the kids to be ready for story time and Rachel caught me subconsciously stroking my belly, which is probably twice as big in the evening when I’m tired and worn out than it is in the morning when I’m fresh and my abs haven’t yet given up on life.

“Wow!” Rachel remarked. “You must have eaten a lot! You look really full!”

“Oh, I am so full,” I agreed, trying to keep a straight face.

We decided to tell the kids we were expecting a new baby the very next day and they were overjoyed!
Posted by Nancy at 11:43 PM