The local branch of the company Andrew's father works for is closing down (don't worry; Reid still has his job (he's worked remotely for several years now)). Their official last day was on Friday and so after everyone had left for the day (and forever) we showed up to scavenge (since Andrew's dad was in charge of shutting things down).

The kids had a blast running around to all the offices and grabbing the whiteboard markers that had been left behind. We picked up a few erasers, too. Zoë was in charge of carrying a few and ended up getting really messy.

"Did you put that eraser on your face?" Grandpa asked when he saw her.

"Okay," Grandpa said. "You've got a little something on your nose..." 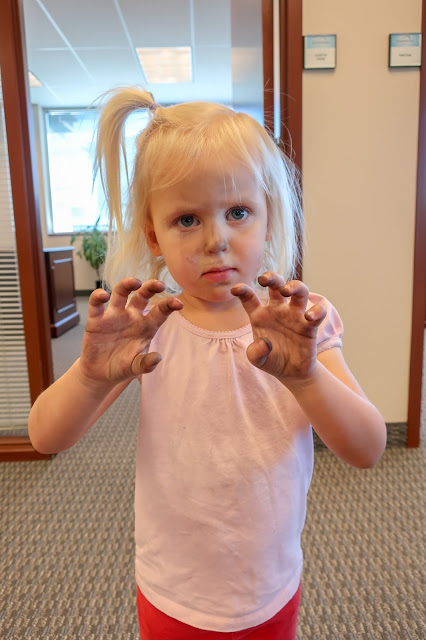 She was suddenly incredibly self-conscious about her "sooty" hands and face and we had to find the restroom so she could freshen up.

I grabbed a potted plant. I was going to get a corn plant (because they're ridiculously easy to take care of and I miss the one we had in Durham) but we settled on a smaller-looking plant. I looked up what it is when we got home and said it's apparently a poisonous plant called dumb cane (or mother-in-law's tongue) and is somewhat poisonous. It creates a needle-shaped crystals of calcium oxalate which cause micro-abrasions when chewed, which in turn leads to swelling and so forth, often rendering their victim speechless, or dumb, for a while.

Fortunately, death by dumb cane is rather rare because it's almost impossible to chew enough of it to be lethal. So that's nice.

When I told Rachel about it she said, "Maybe we should feed some of it to Benjamin..."

But we would never do that.

Actually, I was more worried about the stem that broke off and which Zoë was happily twirling around in the backseat the whole way home because if she had started ripping that leaf up for fun (you know, as kids sometimes do) it would have ended up being the very opposite of fun.

But I think having the plant around should be alright if we keep it out of reach of the baby (he's our main chewer-of-things over here).

Benjamin won the award for the worst injury of the evening. He was standing by the front desk (begging to take home the bowl he's holding in the picture) while we were waiting for the elevator. I told him we didn't need the bowl. Then the elevator came and Grandpa said, "Come on, let's go!" and Benjamin took off at full speed...and crashed into the glass top of the desk. 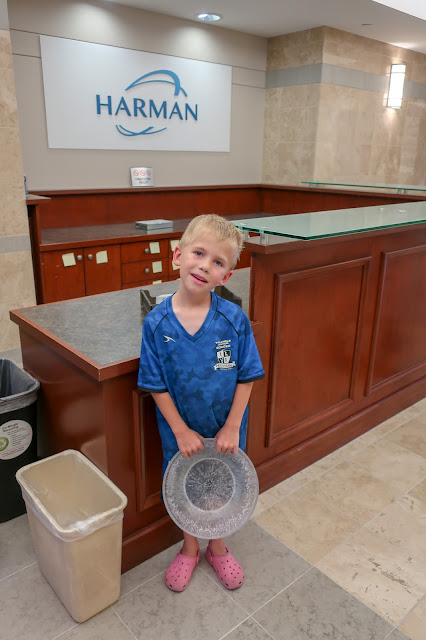 He gave himself a nice goose egg, though there was very little blood, and after he caught his breath (it took him so long to get that first cry out that he was legitimately turning blue) the first thing he asked was if now he could have the bowl. So I told him he could.

So here he is wearing his sympathy bowl as a hard hat: 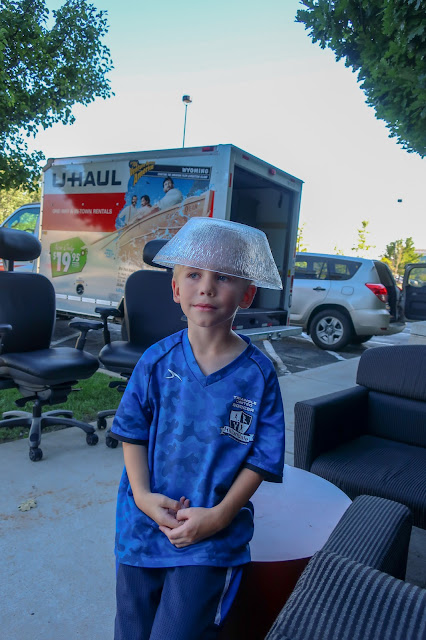 We may have also grabbed a few desk chairs and—oh!—some bookshelves. We have a book problem at this house. I really need to start taking my kids to the library again (but I just don't love our local library so...).

While we were waiting around outside, Benjamin suddenly said, "Mom! I know what to do for your birthday! Give me the camera! I want to take a picture of you standing by that rose bush as a birthday present. Isn't that great?!" 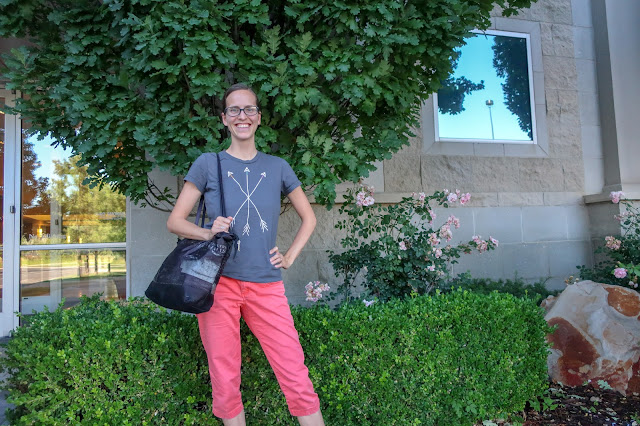 On the way home we stopped by McDonald's for the kids and Karen and the kids surprised me with a doughnuts cake, which contained a healthy (or unhealthy, depending on how you look at it) number of maple long johns (Andrew tipped them off about what I wanted). It was perfect! 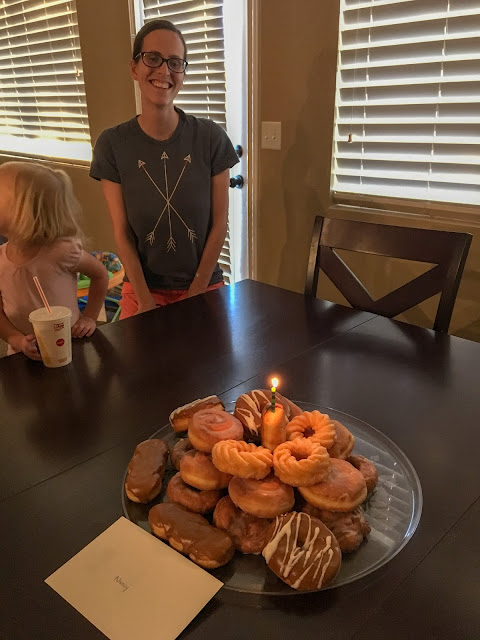 And just like that I'm suddenly 11 times Zoë's age (she just turned 3, if that helps). 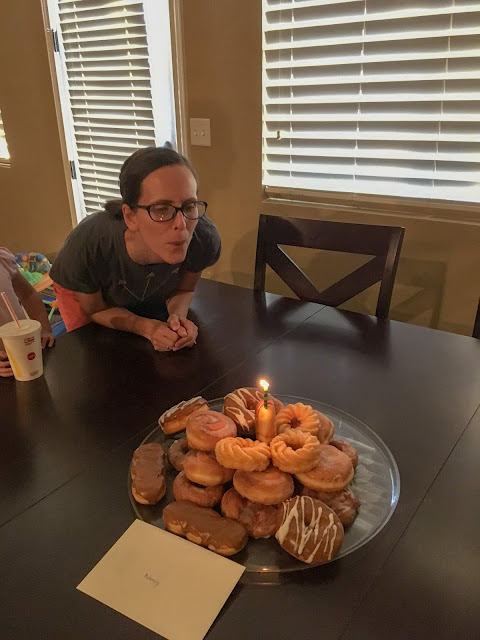 When we finally got the kids to bed (except for Alexander who was far too excited by all the craziness of the day (it was a highly unusual day)), Andrew and I went to out to Culver's for dinner, which was food, anyway.

My Grandpa Conrad used to always say that (right, Mom?): "It's food, anyway!"

We were both so hungry and it was so late by the time we went out (like 9:30, folks) that neither of us really cared where we went out. But it was nice to be able to eat dinner without having a squirming baby to tend to (so thank you to Grandma and Grandpa for playing with Alexander while we were out).

All in all it was a wonderful birthday!
Posted by Nancy at 2:15 AM