Six years ago, on a beautiful Sunday like this one, my sweet little Benjamin came into the world in a flurry of excitement and panic. Far more panic than excitement, truthfully. In fact, I'm not even sure it was a beautiful day because I spent the entire day crying in the hospital.

Because I remember staring out the window and wondering how such an awful thing could be happening on such a beautiful day.

What I don't remember is how many times I said no.

"Sweetie, you are going to have this baby today."

"You've progressed too far. Nothing is working. The baby is coming."

I hovered between shock and denial for what felt like hours, shivering uncontrollably beneath piles of heated blankets. Alas, no amount of begging or bargaining will stop the inevitable and I did go on to have a baby that day.


The next few weeks seemed like a constant struggle between life and death: 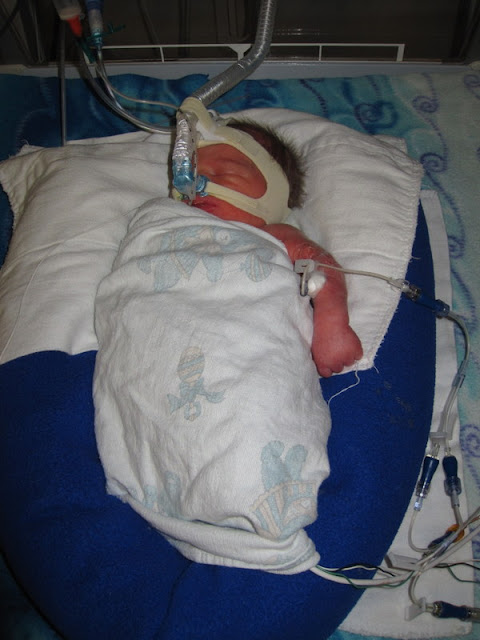 He was so tiny, so fragile:

And he simply could not figure out how to do staying-alive things, like eating, breathing, and beating his heart all at the same time (he still struggles with multi-tasking, to be honest):

But he was also tenacious and eventually we were able to bring him home, which was, oh, so sweet:

I very nearly got up to bear my testimony in church today (but then I didn't because the pulpit was rather busy) because Benjamin asked me a surprisingly touching (though entirely irreverent and off-topic) question during sacrament meeting, which got me thinking.

"Mom," he whispered (far too loudly), "Are we celebrating my birthday right after church?"

"We're celebrating all day," I assured him, pulling him into a cuddle in a futile attempt to get him to sit still.

"Yup," I confirmed before gently shushing him. "Now, hush."

"Huh," he snorted skeptically. "This doesn't feel like celebrating."

The opening song was There is Sunshine in My Soul Today, which is pretty darn celebratory, but at that moment the chapel really didn't feel very celebratory. In fact, it felt a little solemn, even sacred, as the sacrament is wont to be, and here I was discussing birthday plans with a squirming six-year-old. This made me question my own ability to remain reverent because, as we know, "reverence is more than just quietly sitting: it's thinking of Father above," not birthday parties.

Perhaps I should have reminded him to think about the Saviour rather than telling him that we were definitely celebrating his birthday. Great; now I found myself thinking about missed teaching opportunities. I'm really not very good at staying reverent.

Later the bishop's wife spoke about filling her soul with sunshine, and how the sun is the perfect symbol of Christ's love for us, and how symbols are important because they help us to understand the understandable.

And in that moment, I knew that it was okay for me to think about my son's birth and celebrate his life, even in the middle of the sacrament, because in my life, Benjamin is a symbol of God's love for me. All my children are a blessing and a joy, but Benjamin? Benjamin's birth was different.

If we were Nephites, he would surely have an epithetical phrase appended to his name, like "Jacob, my firstborn in the days of my tribulation in the wilderness."

Benjamin, my firstborn far too soon in the days of our tribulation in graduate school (again).

There is a lot of emotion surrounding his birth story: anxiety, happiness, relief, panic, loneliness, worry, grief, euphoria, pain, gratitude. So much gratitude.

The thing that I kept thinking about as he butted me with his beautiful round head (still in the middle of sacrament meeting) was how many prayers were offered on his behalf. The very fact that he was born on a fast Sunday is a miracle to me, as was the outpouring of generous prayers from friends and family of many denominations. Heaven heard a lot about my little boy that Sunday six years ago.

So many people, from all over the world, messaged me to say that they had offered a prayer for Benjamin. Friends in Egypt, Italy, France, Jordan, Russia, Canada, and here. My mom's coworker Janet was in the Mormon Tabernacle Choir and said that they specifically prayed for him in their morning devotional. A friend lit a candle for him at her church. Their faith was a beautiful, inspiring thing for me, and still is. It buoyed me up, and still does.

Much later, in Relief Society where I was still distracted by babies and things, we were talking about Elder Ballard's October 2012 conference address, Be Anxiously Engaged. In it he talks about bees and how an individual bee makes only a measly—but vital—contribution to the hive:


Honeybees are driven to pollinate, gather nectar, and condense the nectar into honey. It is their magnificent obsession imprinted into their genetic makeup by our Creator. It is estimated that to produce just one pound (0.45 kg) of honey, the average hive of 20,000 to 60,000 bees must collectively visit millions of flowers and travel the equivalent of two times around the world. Over its short lifetime of just a few weeks to four months, a single honeybee’s contribution of honey to its hive is a mere one-twelfth of one teaspoon.

Though seemingly insignificant when compared to the total, each bee’s one-twelfth of a teaspoon of honey is vital to the life of the hive. The bees depend on each other. Work that would be overwhelming for a few bees to do becomes lighter because all of the bees faithfully do their part.

And I thought again about all those prayers buzzing up to heaven in behalf of my little boy. Though I believe Heavenly Father listens to every prayer, there is something powerful about many prayers. I don't think having dozens and dozens of prayers about Benjamin did anything more to get Heavenly Father's attention than if only my own prayers had reached his ears, but knowing that all those many people were praying for us was, in what seems almost strange to say, an expression of God's love for me.

Each one-twelfth of a teaspoon of faith from my family and friends seemed to pour into me until I felt empowered. I had been so scared, but I knew that I could do what needed to be done. I would birth that baby and we'd get through the aftermath, whatever it might be. Thankfully, the aftermath was only five weeks in the NICU (and a lifetime of Benjamin (hello, grey hairs)) and we had an entire beehive helping us recover. Recovery would have looked much different had his birth had a different outcome, but I'm sure our beehive—our friends and family and ward family and Father in Heaven—would have helped us along that path as well.

So you see, Benjamin, sometimes a celebration is solemn.