No good can come from bad

I have a million other things to write about but I feel like today would be a good day for Flashback Friday to end its hiatus (it's Monday, though, so perhaps we'll call today Memory Monday) because I've been searching through the archives and though I referenced this story in passing I never really told the story.

Certain current events, however, have made this story seem even more harrowing than I think it felt at the time. I was terrified and angry at the time, yet also felt this sense of control because what was happening felt too ludicrous to be allowed. Surely the border control officer was joking. The very idea was laughable; no one in their right mind would allow it. So of course it couldn't happen, wouldn't happen.

And it didn't happen. Not to me.

But apparently it is happening!

And perhaps I'll talk about that a little bit, but first, the story:

In 2009 we were living in Egypt—a full-blown dictatorship at the time—and my friend Jaehee (a Korean citizen) had to exit the country in order to renew her visa. Since her husband and my husband were both in the middle of their master's degree programs and couldn't take time off of school right then (and, as American citizens, had the option to renew their visas without leaving the country), I told Jaehee that I would be happy to go on a trip out of the country with her. Though I didn't have to leave Egypt to renew my visa, either, I'm always up for an adventure!

We researched the safest/easiest/cheapest place for two women—and one toddler, because 21 month-old Rachel would also be joining us—to fly to and settled on Greece. So we booked our tickets, arranged some hotels, and jetted off across the Mediterranean Sea for a wonderful Hellenic holiday. 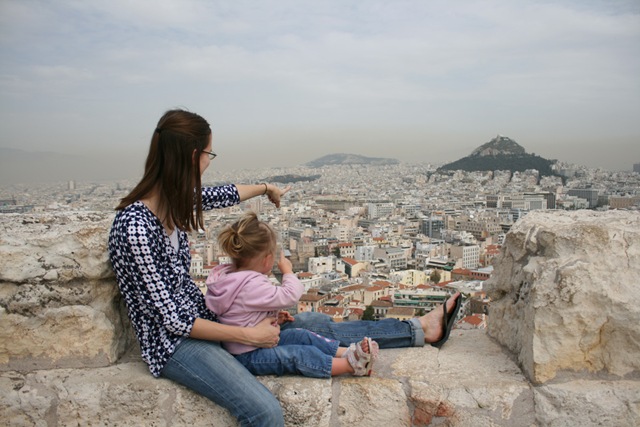 Or, you know, as wonderful a holiday as a toddler-toting mother can have while battling morning sickness (I was only 10 weeks pregnant with Miriam, but sometimes those early weeks are the worst and, let me tell you, that ferry ride from Athens to Aegina Island was downright stomach-churning (for me, anyway)). Jaehee loves kids, though, and was so helpful with Rachel. They were good buddies, those two! 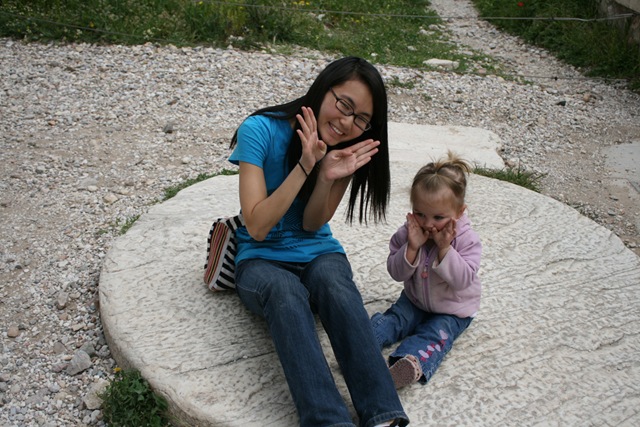 All good things must come to an end, however, and though we still had so much more we wanted to explore in Greece we also had to head home to Cairo.

The flight home was uneventful. Rachel even slept, so that was downright miraculous. We landed in Egypt rather late and made our way, bleary-eyed, toward customs. Rachel and I got into the line for visa-holding foreign nationals. Jaehee got into a different line so she could buy a new visa.

Soon Rachel and I were called up to go through the border patrol.

I handed the officer our passports. He flipped to our photographs and—glancing up, down, up, down—made sure they matched our faces. Then he began searching for our visas.

Unlike my current passport, which is bereft of entrance stamps and visas alike, my last passport was full to bursting. Rachel and I each had four full-page visas for Egypt in our passports, only one of which was current. And though they were placed somewhat randomly inside—it's not like the visa issuers made an effort to put them in sequentially—the border patrol officer had no problem finding my valid visa in my mess of a passport (I also had visas and stamps from trips prior to Rachel's birth (Jordan and Austria and Turkey and the UAE and so forth)).

For some reason, however, he couldn't seem to find a valid visa for Rachel (whose passport only had the four Egyptian visas and entrance/exit stamps for Egypt and Greece so was much emptier than mine).

"No good, no good," the officer told me, holding up her passport to a page with a visa on it and shaking it in front of my face. "Invalid! Invalid!"

"Yes, that one has expired," I agreed. "But there is another one in there."

"All no good," he said, flipping through her passport again.

"Yes, visa!" I said, trying to keep the rising rage out of my voice. "We live here. My husband studies at the university. The university gets us our visas. Our visas are valid. See mine? It's good until June!"

"She has the same dates on her visa."

"You go through," he instructed. "Give him baby."

I'm typically not a scene-making person but I decided that this was a scene-making situation. Mother-bear instincts were boiling up inside me. That baby was not leaving my arms, by golly. I was an American citizen and had plenty of white privilege to summon to my rescue.

"No!" I spat, making no effort to keep my voice down and trying to sound official. "That passport is property of the government of the United States of America and you have no right to keep it from me.* I am the official bearer of the passport and you will give it to me now, or I will be calling the embassy (and I know the Deputy Chief of Mission).**"

I don't know how much the officer understood of my little speech, but he understood enough that he reluctantly slapped Rachel's passport into the palm of my waiting hand. I flipped to the correct visa and ran my finger under the clearly-printed validity dates.

"Ah, yes," he agreed, nodding nervously before taking her passport and stamping it. "Visa good."

"Shukraan jazilaan," I said with a sardonic smile I took my passport and entered the country. "Thanks a lot."

Trembling, I met up with Jaehee (who was like, "What the heck was going on back there?!?!") and we caught a taxi and made our way home.

Now, I don't know if I handled that the best way (treating a border control officer so rudely certainly could have backfired on me) and I certainly don't know what would have happened had they taken Rachel into their custody. Like I said, it was a terrifying moment but also I honestly didn't think they would ever actually separate Rachel from me. Because how would they process a baby into the country. She was completely dependent on me—she couldn't fill out the paperwork for a visa on her own or pay for a visa on her own. She wouldn't have even been able to tell them her parents' names or where she was from.

The idea of taking a baby into custody seemed ridiculous and yet the thought of "what if..." has always haunted me a little. They could have taken her from me if they'd really wanted to. Who would have stopped them? It was, after all, a dictatorship.

So hearing about children being taken from their mothers at our borders makes me feel sick to my stomach. It's ridiculous. And I believe it's our duty to speak up. Seriously.

To quote from The Family: A Proclamation to the World,


“We warn that individuals who violate covenants of chastity, who abuse spouse or offspring, or who fail to fulfill family responsibilities will one day stand accountable before God. Further, we warn that the disintegration of the family will bring upon individuals, communities, and nations the calamities foretold by ancient and modern prophets.

Ripping children from their families in no way maintains or strengthens families. It completely disgusts me that it is happening in our country—which shouldn't be remotely comparable to a dictatorship.

* That's probably not true but, ya know. Whatever.
** He was our home teacher, actually.
Posted by Nancy at 7:58 PM