Earlier this month I attended the Mormon History Association conference (in Boise—oh, boy!), which was my first professional conference in years. Soon after we moved here, I did an interview with Heather Stone, who was collecting oral histories of women who had moved from a Mormon-minority community to a Mormon-majority community during their Young Women years (12–18) sometime between 1975 and 2000.

I first moved to Utah in 2000 so I just barely made the cutoff!

She presented at MHA, but wanted to do a "public history presentation" and rather than simply present her findings, she brought along some of her interviewees as a sort of "display." So I, along with five other women, prepared a 7-minute monologue drawn from stories we told Heather during our interview.

It honestly was difficult for me to squeeze what I wanted to share into seven minutes and I wasn't really sure that what I was saying was particularly noteworthy. But also, I suppose it didn't matter because the whole idea was that it was simply a collection of stories, and everyone has a story.

Oddly enough, I was nervous to share my stories out loud. I feel fine sharing things here—on the blog—for all the world to read, but telling parts of my story to a room full of people was rather difficult. To be honest, I had the same catch-in-my-gut feeling when a secretary at the Sanford school asked if she could forward my post about graduation to the rest of the school to read. Like, I guess I know people read my blog but also I don't think that many people read the blog (we have numbers on this so we know the audience isn't exactly wide). It spooks me a little when people admit to reading my blog even though I know full well that it's public. 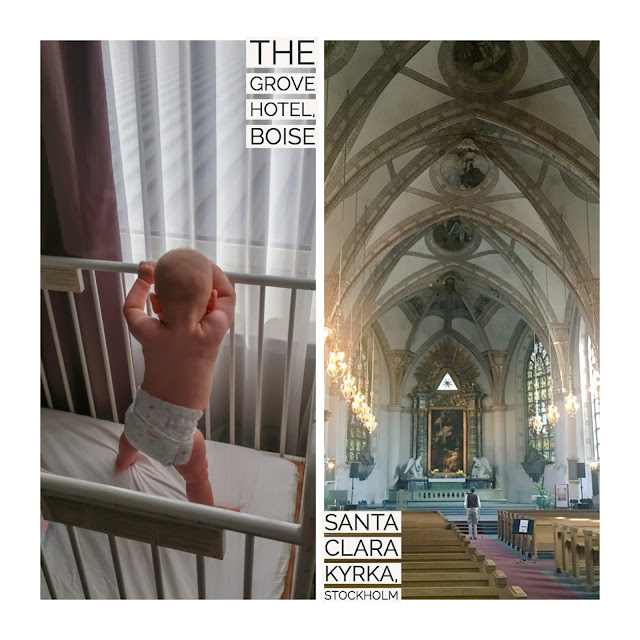 Anyway, it was fun to get to go up to the conference and meet with these other women who shared a struggle similar to mine—because fitting into a Mormon-majority culture was a struggle (it still is a struggle). Chatting at the table and feeling like, "These women get me," was rather liberating. Speaking of liberality, I met a few more Mormon democrats (that's like finding a unicorn)!

While I was speaking, some women who'd come along as tech-support people helped tend Alexander, which was so kind of them—especially since they'd all left children at home! But that's kind of just how mothers roll, isn't it? We're never off duty.

When I first presented the idea of my attending this conference to Andrew, he was super excited about it. "You should go," he said. "You should definitely go. You're going. Go."

"But don't you have a conference coming up?" I reminded him.

"See? That's totally fine. You should go. You'll love it. Conferences are amazing! You get to meet all sorts of smart people and listen to interesting new research and totally wear yourself out, because introvert. But then you get to go back to the hotel room with a Subway sandwich or something and turn on a movie and relax and recharge. At least, that's what I do. And it's amazing. You should go. You'll come back wanting to get a PhD in religious studies or history or something. Go!"

So I committed to going.

And then Andrew was like, "Oh, yeah, my conference is in Sweden and I have to travel there so I'm actually leaving on Saturday."

That complicated things immensely but not impossibly. Andrew worked from home on Thursday and Friday so he could watch the kids, and then Reid and Karen watched them for us on Saturday. I was in charge Sunday through Wednesday and then Andrew finally came home. So altogether, Andrew and I spent a week apart, the kids spent one day with no parents and a full week of solo-parents. It was a little chaotic but I think we're just about fully recovered from it, although when we were discussing the effects of abandonment (and/or having their parent torn away from them) on a child, Miriam quipped, "Sometimes you and Dad abandon us and so far we're fine."

"That's suuuuuuuper different because you know where we are while we're away, we text you constantly, we can Skype/call you, and we leave you with competent, trusted, loving caregivers in a safe, cozy environment," I responded.

But way to lay on the guilt, kid! 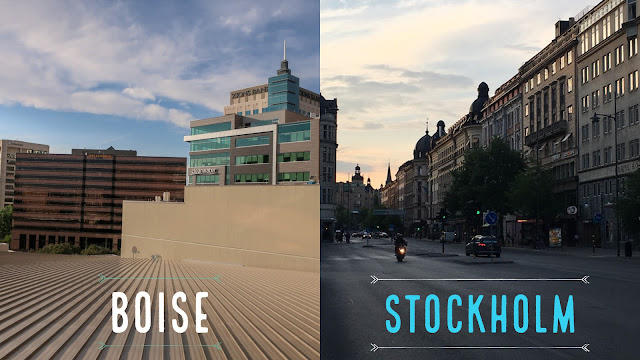 In my defense, as I mentioned, I took the baby with me. So my conference was not quite as amazing as Andrew had described it because I was worrying about a baby the whole time. Juggling the baby during lunch, bouncing the baby while trying to listen in on Patrick Mason's paper (from what I heard it was good but Alexander was so over sitting in a stuffy room by that point in the day and cried every time I tried to go inside, so we mostly listened from the hallway (so it was a good thing I went up and said hello before the session started)). 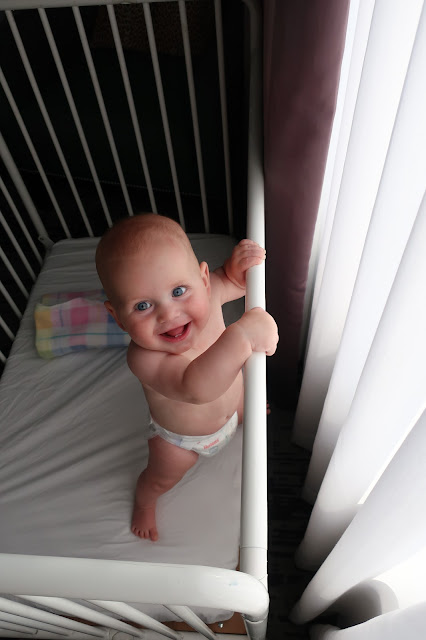 And then, at the end of a long day of conferencing, I went back to the hotel room to convince a baby to go to sleep and then express milk for my friend's baby. So just a little bit different from Andrew's end-of-a-long-day-of-conferencing ritual. But I didn't mind the extra company because...look at those eyes: 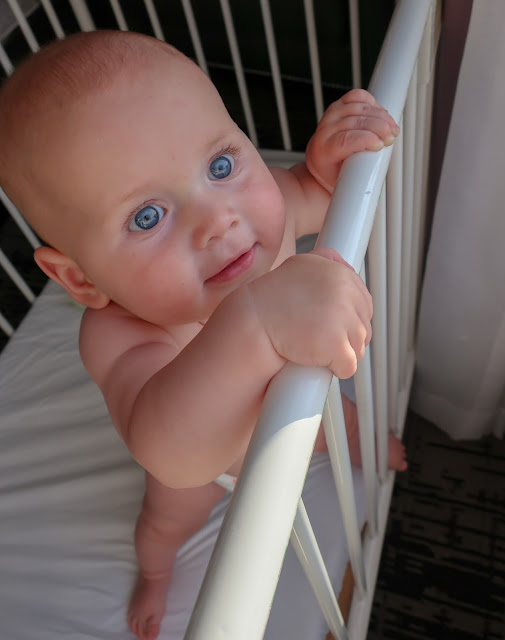 All in all it was a great experience and, as an added bonus, Crystal came out to Boise to visit with me on Friday night! It was so wonderful to get to see her again! 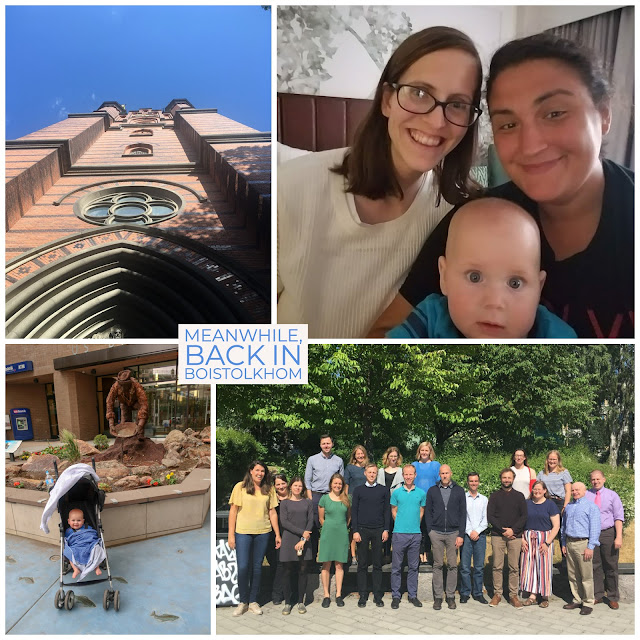 Andrew went to the Stockholm University to attend a workshop and to present a soon-to-be-published article, titled, "Taking Control of Regulations: How International Advocacy NGOs Shape the Regulatory Environments of their Target Countries."

He stayed in his own hotel room, was hopelessly jet-lagged, did not appreciate any of the seafood, was amazed by how late the sun set (10:08 PM), and was equally perplexed by how early the sun rose (3:31 AM). But he had a great time! His hotel was very close to Santa Clara Kyrka, which he visited on...Monday, I think (because he took a "nap" on Sunday when he got to his hotel and it ended up being an 8-hour nap). Other than that he was just doing conference-y things (presenting and schmoozing and so forth) and didn't have a lot of time to see much of Stockholm before flying home on Wednesday. 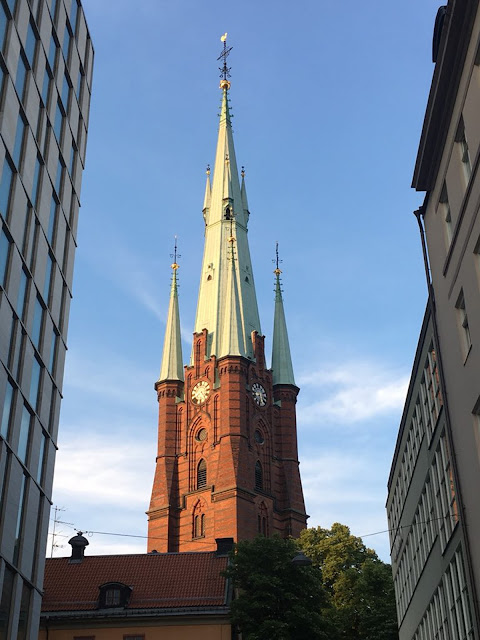 Side note: somehow Andrew managed to have the house spotless for my homecoming. Everything was tidy and put away. It was wonderful! Grandpa tells me there was a lot of screen time and some cereal-for-dinner nights, but the house was clean so who cares, right? Apparently I do because on the flip side, by the time Andrew got home from his conference, the kids had had much less screen time and many more vegetables but the house was a disaster!

All in all, it was a crazy week. I'm not sure we should ever plan to attend back-to-back (or overlapping) conferences ever again!
Posted by Nancy at 1:21 AM