Technically he's six years old and one week (and, frankly, we're simply happy he's made it this far into his seventh year because this week has been quite the week).

A true southern boy (who still asks nearly daily to return to North Carolina (and then Zoë will pipe up, "My old house is in Norf Ca-o-wina!")), Benjamin requested chicken and waffles for his birthday dinner, which was delicious for all and very messy for some.

Alexander was covered from head to toe in strawberry gunk, so while I gave him a bath and Grandpa did the dishes, Andrew took the big kids into the basement to play the Wii. "If you can help clear the table," he said as if it was a real sacrifice on his part, "I guess I can play a round of MarioKart with you guys."

Ordinarily Alexander isn't a huge fan of being cleaned off, but he did enjoy having the tub to himself. So maybe bathing isn't what he finds so awful. Perhaps it's his bathing companions...


While Alexander was in the tub, Bumpa arrived, and soon after everyone else (I was about to list everyone but I did that in my last post, which was basically a lifetime ago). It was rather hot so we didn't make everyone go outside, but we did still play around for a while before opening presents. We were still waiting for Rosie and Austin to arrive and didn't want to sing and do cake without them.

Presents didn't buy us very much time, however, because unlike Zoë, who s-l-o-w-l-y tore tiny bits of paper off her presents, Benjamin was completely unafraid to rip through the paper off his gifts.

He got a good haul of "fact books" from various people, which he was excited about. Naanii gave him a book about eggs (An Egg is Quiet) and a (children's) survival book from the Lonely Plant; Grandma gave him several Who was... books; and we gave him some early reader history books. He was rather thrilled to beef up his "true shelves" upstairs.

We rearranged our bookshelves for summer break and pulled out every non-fiction book we could find (that was around his level) and made a couple of "true shelves" for him so that he can have "history time" and "science time" whenever he wants. He loves non-fiction to the point of my having to send him to bed to read to himself because I can't stay awake to read him textbooks before bed (Written in Bone is one of his favourite books to bring to me to read, and it's a fine read but...I'm tired). 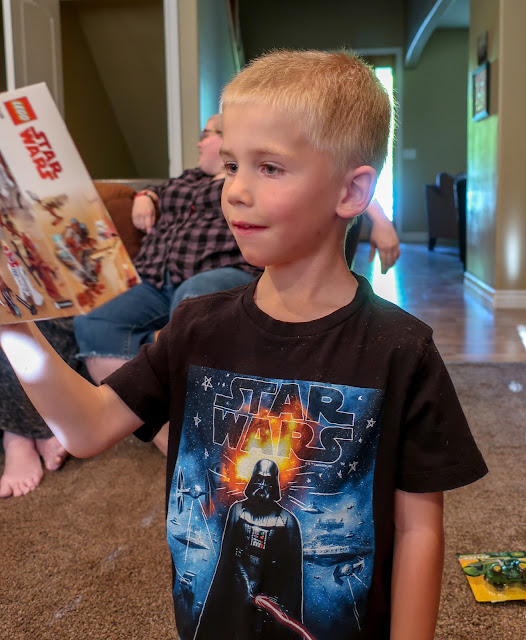 He also got several Star Wars Lego sets (from us and from Aunt Katharine and Kayl); some Paw Patrol cars and National Geographic stuff (notepads and things) from Uncle Patrick and Aunt Josie; and some new little cars/tractors from Aunt Linda. 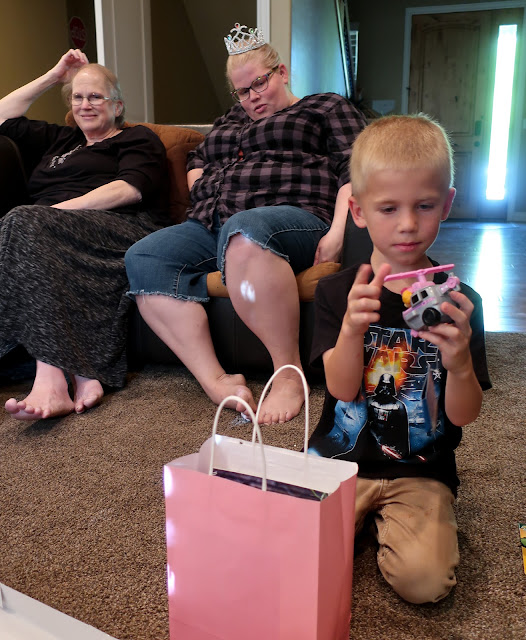 Just when I saying, "Maybe we'll just do cake without Rosie..." there was a knock on the door, which I assumed would be Rosie and Austin (it was) so I said, "Just kidding. We will wait for them after all." So we sang and had cake and played and visited and everything was great.


Here's a picture of Benjamin examining one of his gifts while sitting on Rosie's lap. You'll notice that Rosie has her elbow propped up on a footstool. 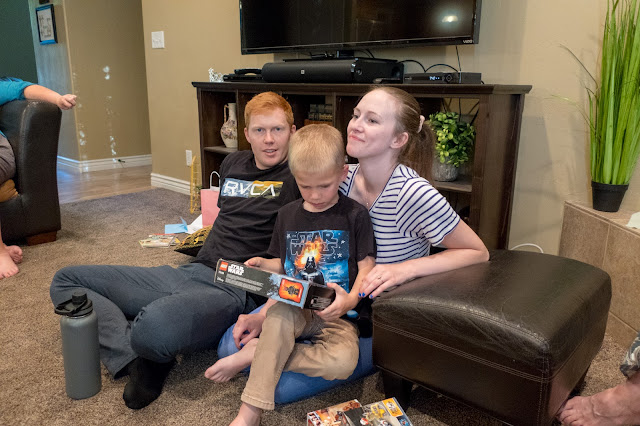 Minutes after this picture was taken, Benjamin came to sit on my lap (I was on the chair facing Rosie) and then when he was finished with me he stood up (still on my lap) and leaped across the room to the footstool. He made it, but just barely and the footstool started to tip over. Benjamin overcorrected while trying to catch his balance and he and the footstool ended up doing some terrifying, death-defying acrobatics.

Everybody watched with bated breath, sure that he was about to break his neck (really), and trying to keep track of how many flips and twists his flailing body went through before it came to rest on the ground. To add insult (and injury) to injury, the footstool then landed squarely on top of him.

In a daze I managed to hop off my chair and toss the footstool away.

"Are you alright?" I asked; I was afraid to move him (seriously fearing a spinal cord injury).

He made a faint squeaky noise in response. His breath had been knocked out of him and/or he was hyperventilating. Whatever the case he had not taken a breath in quite some time and his lips were oddly purple.

Or should it have been little breaths? I dunno.

He started to get up on his own so I figured his neck was probably alright (thank goodness) and I helped him settle into my lap to let out some body-wracking sobs once he'd managed to catch his breath. He was fine within a couple of minutes, the only long-lasting physical injuries being some scratches from the legs of the footstool landing on him.

It was a rather tense moment, but we're glad he came out of it alive (and, you know, perhaps a bit wiser about not jumping around the living room (but probably not)).

Just to prove that he's alright, here he is dressed up as a birthday candle: 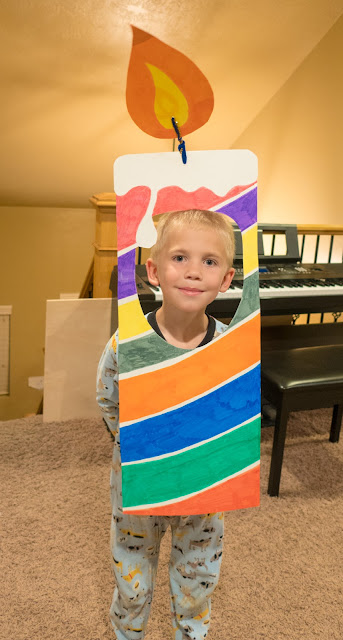 Our primary in Durham had a tradition of singing to the children on their birthdays and there were candles like this for each birthday child to stick their faces into, and then at the end of the birthday song the primary would blow the candles out and the birthday kids would either dramatically fall over, let their candle drop, or quietly slink away (depending on how they felt).

Benjamin loved this tradition and, as you've probably guessed, was one of the dramatic fallers after being blown out by his peers.

He requested that I make him a candle for his birthday this year so that we could blow him out since he felt like he was missing out on that. So we made this candle together during Sunday afternoon "quiet time" but then I forgot to bring it out while everyone was over for his birthday!

We sang to him again before bed, which he loved.

And see how fine he is! This boy can sure take a lickin' and keep on tickin'! He's been in all sorts of trouble since turning six (and plenty of trouble before but, like, let's be honest, he's only been six for a week and the trouble he's managed to get himself into is kind of mind-boggling).

On Monday (June 4, the day after his birthday) the girls and I went dress shopping with Naanii and Rosie (for Rosie's wedding—the girls are going to be flower girls) and Andrew sent me a text message to say that Benjamin had somehow swallowed a Lego torpedo from his brand new Lego set.

He was just firing it "like normal" while making shooting noises and one of them ricocheted off the wall and...down his throat!

He was more upset that part of his new Lego set was "gone" than the fact that it was gone because he'd swallowed it. We're still waiting for it to make an appearance. It looks something like this (though likely much more ensconced in fecal matter): 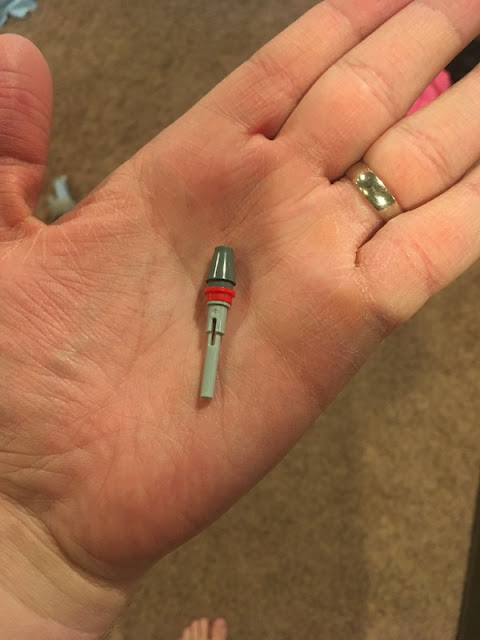 Tuesday, I believe, he escaped unscathed (though Rachel ended up having a tooth pulled at the dentist; her baby teeth just won't fall out).
On Wednesday Riley was over so Grandpa and I took the kids to the splash pad after dinner and Benjamin was running along the terraces behind the splash pad (even though that's against the rules) and he slipped and fell and landed on his chin (with a resounding thud). He cried for a minute and then joked, "I was just trying to knock my tooth out!" He's had a loose tooth (his second one) for the longest time (so perhaps he's a little bit like Rachel in this regard)! On Thursday, I went away for a conference and he was so sad. Not even the promise of Star Wars could cheer him up. "Nothing's better than you, Mom!" he said, clinging to my legs. It was sweet, and truthfully the last time he was offered Star Wars in compensation for my absence he ended up with an awful stomach bug so movies were no consolation at all. But he did get to go out to eat at Olive Garden, which he's been asking to do for the longest time (he's never been).

Friday was uneventful, I think, but on Saturday after Daddy left for his conference, Grandma and Grandpa had the kids all to themselves and had quite the busy day. There were birthday parties to attend in addition to hitting up the grocery store. They took the kids hiking (at The Grotto, where Benjamin, naturally, tripped and fell, giving himself a few more battle wounds) and to the splash pad and they watched The Wizard of Oz. And then they stayed up until I got home (about 10:00 that evening).

"I got this on the hike we took when you were pregnant with Alexander," Benjamin boasted, showing me his fresh wound.

"Yeah, I doubt that," I said. "We did that hike a long time ago. There's no way that owie is from that hike."

"But it is!" Benjamin insisted. "Grandma and Grandpa took us there again!"

I was glad he clarified because I was wondering how he could blame a wound on a hike taken months ago. I mean, I know he has no concept of time...but that was stretching it, even for him!

Around 11:00 last night, Benjamin came out of his bed to tell me he had teeth like a shark. His loose tooth was bothering him and he couldn't fall asleep so he was just awake wiggling it and he realized that his adult tooth had popped up behind it, which made me feel anxious about getting it out of his mouth as well. But it was far too late to worry about that so I sent him back to bed.

I gave it a good yank this evening after scriptures and prayer but before story time. Andrew's usually the tooth puller at our house. Feeling teeth give way like that gives me the heebie-jeebies, so while I felt his tooth release from the socket a bit I couldn't pull it all the way out.

"Your job is to wiggle that tooth the whole time I'm reading this story," I told him (the story happened to be I'll Love You Forever). It fell out in the middle of the first sentence. Hallelujah! 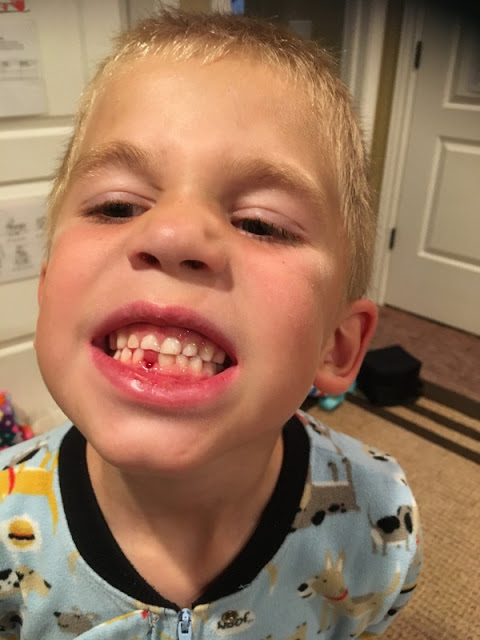 So, that was Benjamin's birthday and his first week of being six. Quite eventful!

I'm going to need to siphon some of his energy off for myself if I'm going to keep up with him the next few years...

(In other news, cousin Gavin recently broke his arm by falling off a chair in his living room. So now I'm over here wondering how sweet little Gavin managed to break his arm while wild child Benjamin did not! It's really quite puzzling...)
Posted by Nancy at 1:48 AM