After stumbling off the plane (red-eye flights with a baby in tow are a terrible idea, FYI) we took the shuttle to the rental car place where we picked up our economy car. Book an economy car online was a bit of a gamble because there wasn't really a way to request a four-door vehicle—we'd either get a two-door or a four-door—so when they handed us the keys and pointed to a tiny black car in the parking lot I panicked a little. We obviously had not scored a four-door vehicle. 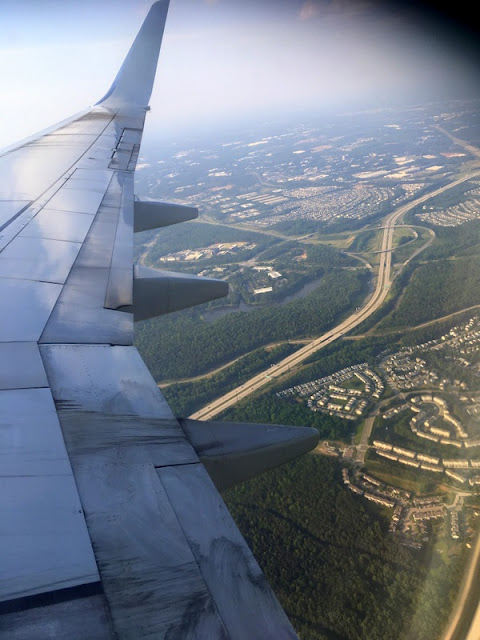 Fortunately, our car had a secret third door! I discovered it while I was in the middle of climbing into the back seat to install Alexander's car seat. It was a tiny, awkward door but still made getting the baby in and out of the car much easier!

Our car was a Veloster but we just couldn't get behind that name so we called it The Veloster Raptor. Because clearly that's an improvement.

First things first, we headed to the Rogersons house and took a well-deserved nap—at least, Alexander and I did. Andrew, I think, went to pick up his robes. When we woke up we headed out on the town to grab some grub and a few things we forgot (like sunscreen). Our first Durham meal was Cookout. We picnicked at West Point on the Eno, our old stomping grounds. 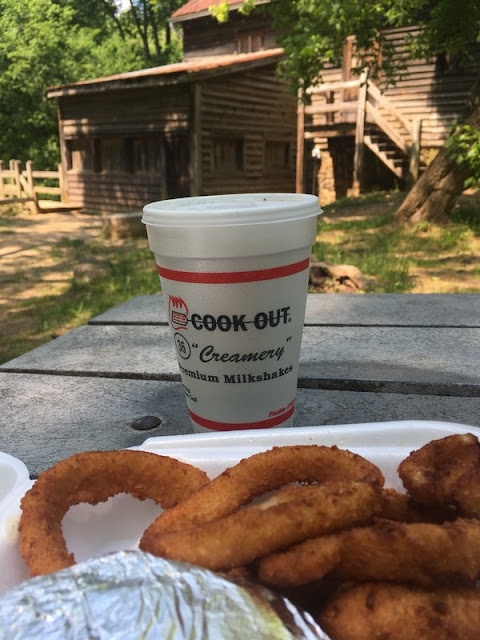 Alexander was so funny on this bridge. He was like, "Oh, hey! I'm on a bridge!" 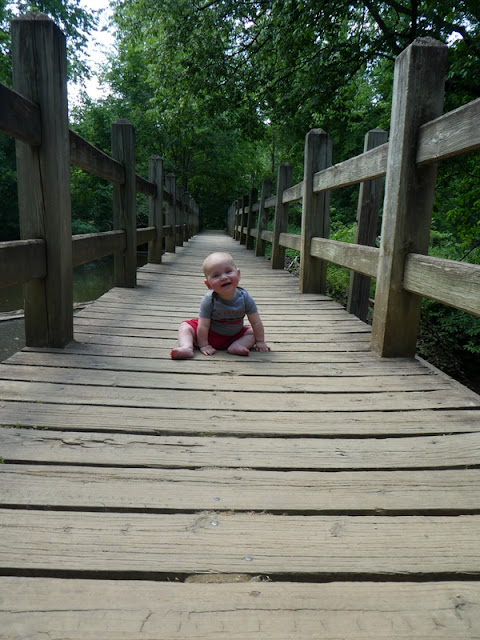 And then he was like, "Huh. There's water going under the bridge." 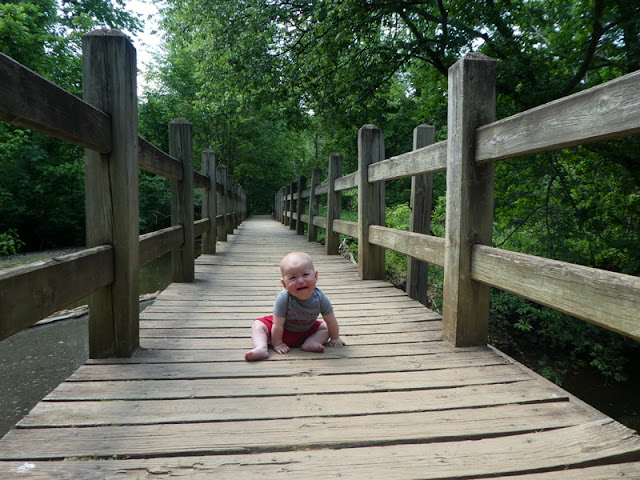 He obviously wasn't crawling then (a month ago). He's crawling now so I can't imagine setting him down on a bridge like this one because...yikes.

We wanted to take a picture down on the bank of the river where the kids liked to play, with the waterfall behind us. But we settled for taking this picture from the top of the embankment instead so that we could avoid the group of ultra hippies who had recently gone swimming and decided to pause their frolicking in the water to have a little jam session down there. There was a girl—topless—playing a flute and some guy with a banjo and a couple other characters. Fun times. The music was good but we didn't want to, uh, intrude on their party. 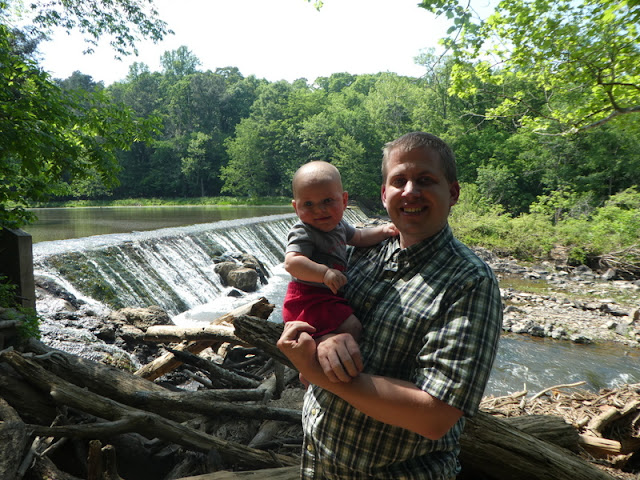 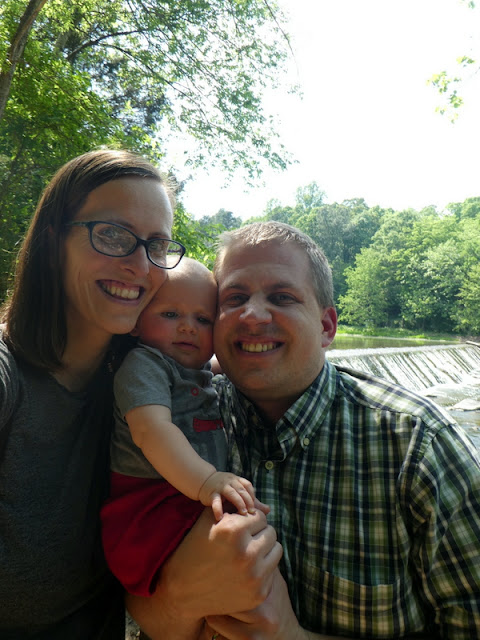 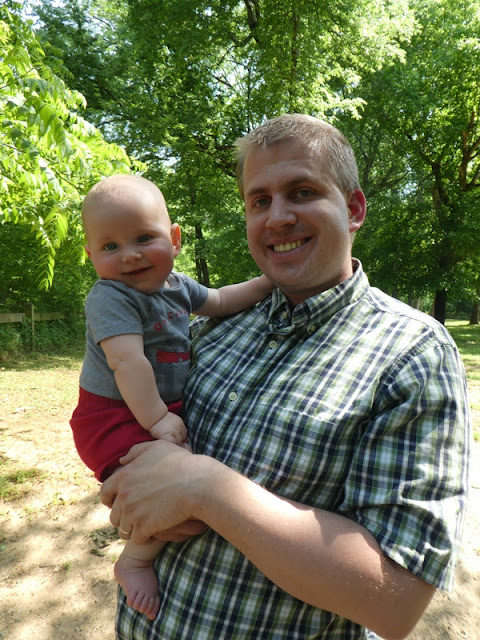 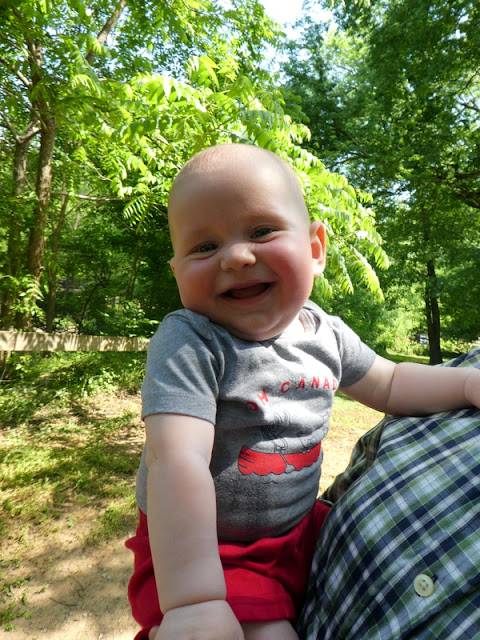 I'm pretty sure we went home for another nap after that and then we had dinner with the Rogersons that evening. The next day we spent on campus at the rehearsal for graduation and then dropped by our neighbourhood to say hello to a few people before returning to campus for a reception honouring this year's graduates. Here's Alexander feeling rather giddy (and in desperate need of a nap) after the rehearsal:


I sent the girls a picture of their old elementary school to make them sad because I'm a nice mom like that: 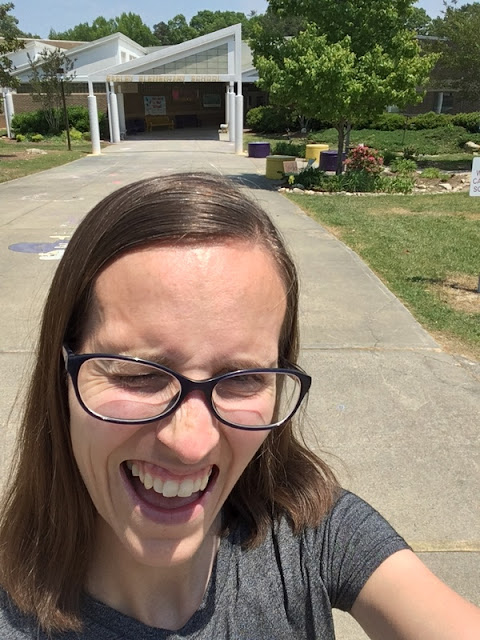 And Alexander tried out the swings at our neighbourhood playground: 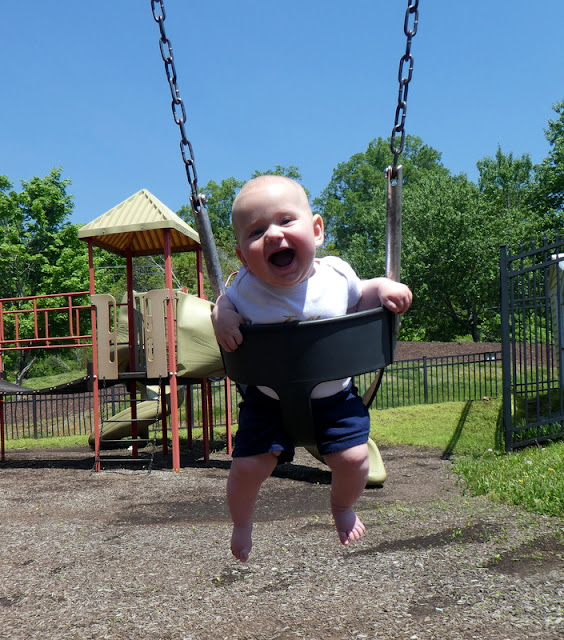 None of the pictures I took at the reception turned out, but I did take this video of a little speech Andrew's advisor gave about him, and Andrew's little acceptance speech (both speeches were off the cuff because neither one of them knew that a speech was required):

I'll take a minute to rave about what wonderful, supportive people we were surrounded by at Duke. The reception had oeur d'oeuvres and an open bar. When I walked in, Ade immediately rushed over to greet Alexander. But then she said, "We were just ordering drinks! You've got to try this one. It's so good!" And then she turned to Puneet's mom and said, "Order one for her, too!" So the next thing I knew, Puneet's mom was handing me a drink. "No alcohol," she assured me, like she knew that I needed to know (I did).

For a minute I wavered because I spent my entire youth thinking people were going to pressure me or trick me into drinking. Was this the moment?! I was always far too nerdy/goody-goody in my youth to ever actually find myself in a situation where I was offered alcohol.

But I quickly realized that if anyone was going to pressure me to drink it was not going to be Ade, who I've trusted for years, or Puneet's Hindu mother (both of whom are pretty teetotalitarian themselves). Honestly no one there expected us to drink at all. They all completely respected that we don't drink and spent five years helping us be our best selves. They threw us baby showers and supported our children's baptisms and came to their birthday parties and helped with projects and shared job leads and ate all of our leftover Halloween candy that we didn't want our kids to eat.

Andrew had such a great cohort!

Anyway, after the reception Andrew and I headed out to Brightleaf Square for some actual food. We ate at Satisfaction and it was pretty good (though I do wish I would have gone with what Andrew ordered). We lived in Durham for five years and never went out to dinner on Brightleaf Square (we were paupers) so I'm glad we went back so that we could! The atmosphere was lovely. 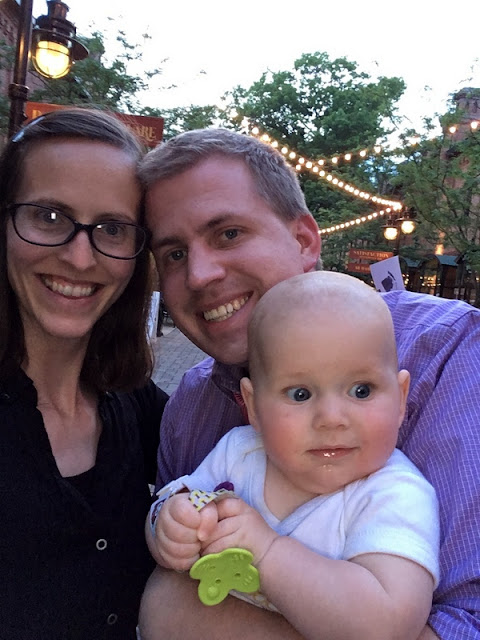 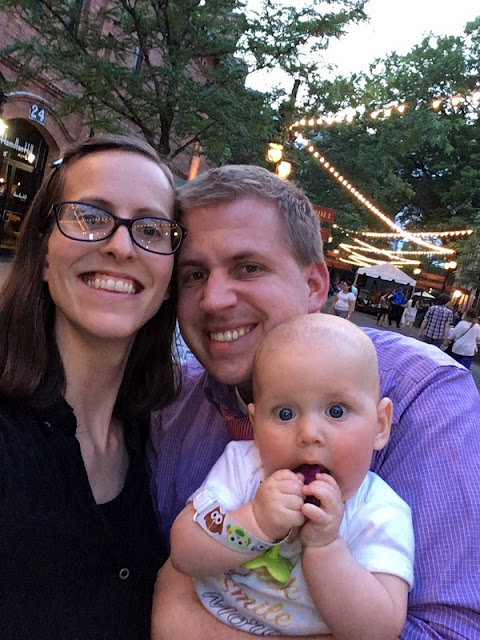 Here's Alexander making one of my favourite faces (you should know that he's also squeezing Andrew's arm with his hands while wildly kicking his legs and squealing): 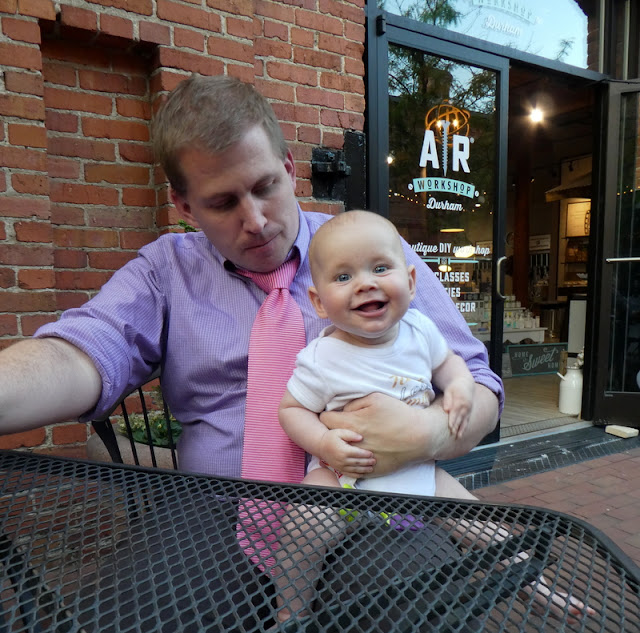 Saturday was graduation all day long. 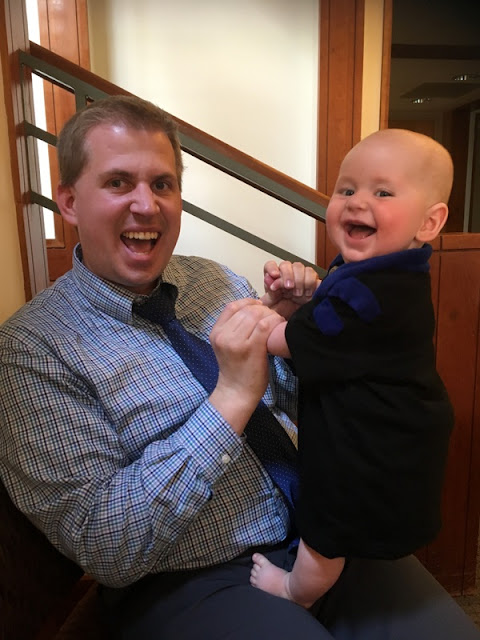 On Sunday we went to church and it was Mother's Day, which was perfect for me because instead of having a Relief Society lesson D2 (that's short for Durham 2nd ward) had a Mother's Day Brunch and Mingle, so I spent the third hour visiting with all of my friends. Andrew, meanwhile, had a rather boring third hour, sitting in the hallway by himself (the priesthood was busy taking care of primary for the ladies so they could all go to Relief Society).

It was strange to see all the kids in the ward, after being gone for nine months. Kids change so much in such a short amount of time! All my little nursery babies have moved into Sunbeams and it seemed like all our kids' friends grew at least a foot (which means that our kids have probably grown about that much without us even noticing because they were doing it right under our noses—the little sneaks (though it does explain why their clothes are all getting too small)).

Andrew had to run his robes back on Sunday afternoon, but before he did we took one last picture of him wearing his robes (the decorations weren't technically for us; they were for another recent graduate that the Rogersons had hosted a party for): 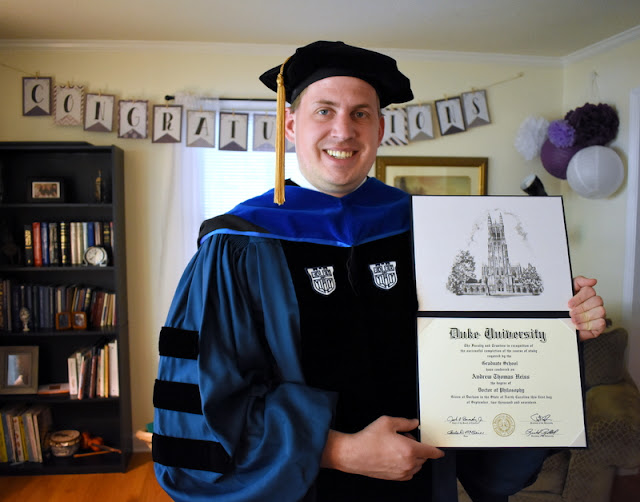 We had dinner with the Adamsons where we, sadly, didn't take any pictures. But it was so nice to get to visit with them! Alexander spiked a fever and was fairly miserable so we dosed him with Tylenol and put him to bed. And then we played a rousing round of Rummikub with the Rogersons.

On Monday morning Ken made us a pancake breakfast to send us off. And that was Durham. 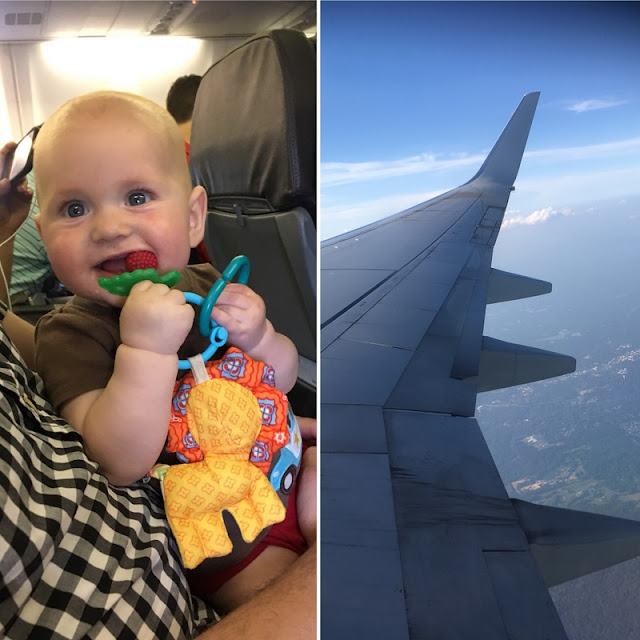 It was good to get back to the other kids, but it was also nice to get away for a bit. The trip went far too quickly and we started missing Durham the minute we left.

We knew that would be the case, though, which is why we brought home the best souvenir of all: a batch of Bo-Berry Biscuits to share with the family! 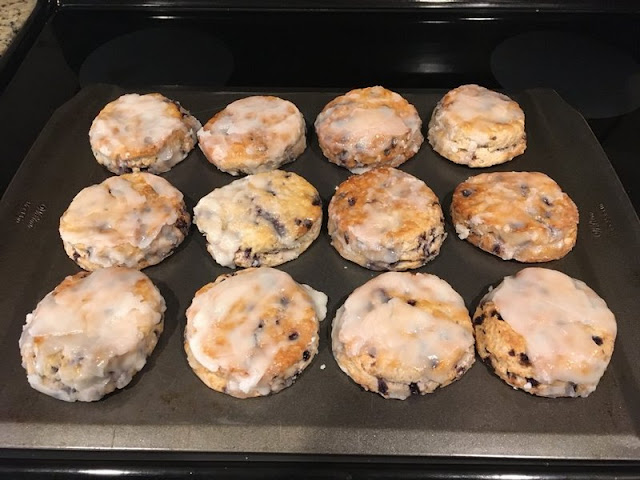 We froze them and transported them home in a cooler (full of frozen breastmilk (because babies don't take a break from eating, even on vacation (I'm still pumping every morning and evening for my friend's baby))). It worked out perfectly and was just the thing we needed when we realized we weren't in Kansas Durham anymore.

We happen to have some bluebs* in our fridge so I might have to try my hand at a copycat recipe tomorrow because now I'm all homesick again...