So instead we went to Iceland

It's the first day of summer, so naturally today was supposed to be quite a bit hotter than it has been so far this year. We've mostly stuck to home this week so I suggested that we go off on an adventure—an easy, shady river trail to Dripping Rock where the kids could splash in the cool mountain water!

I carefully planned out my route so that I could avoid hopping on the highway (because this girl doesn't hop on the highway) and once the kids were loaded in the van we took the circuitous route through town only to find that the one road that would connect me from Canyon Road to East River Bottoms Road (3400 E) is closed due to construction.

Now that I'm looking at the map again, I suppose we could have driven all the way past the cemetery (we ended up driving there, anyway) and hopped onto Scenic Drive. Or I guess 1400 E would have eventually gotten us to East River Bottoms as well. But I'm not a very adventurous driver and running into that "Road Closed" sign killed my ambition.

So instead we made our way to Centennial Park—a very hot and sunny alternative. Still, it was fun to explore a new playground. There were no swings, which Benjamin (who recently learned how to pump) was disappointed to discover, but there was a lot more to climb on and several more slides.

Here's Rachel climbing a support pole (not technically part of the playground): 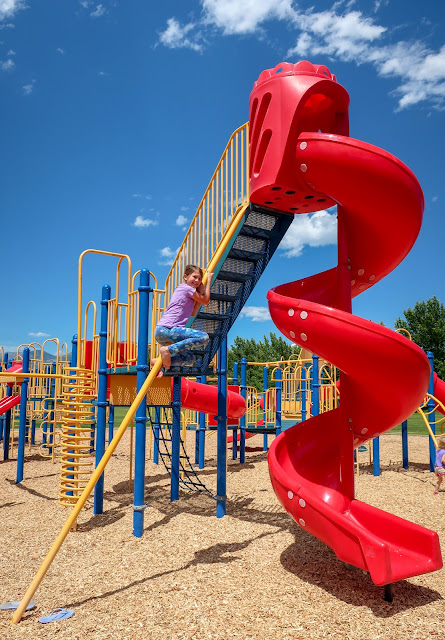 But if they didn't want people to climb on it they shouldn't have put it there: 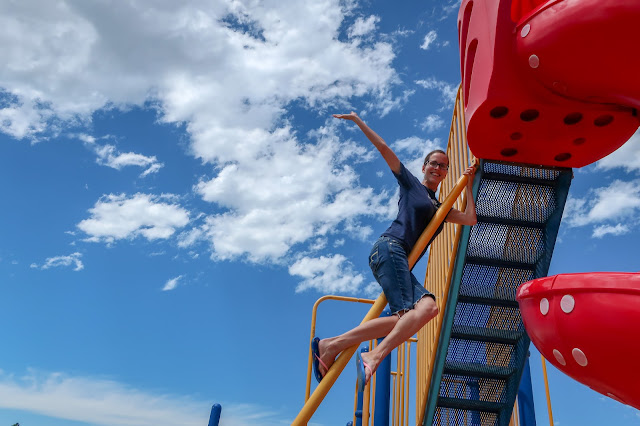 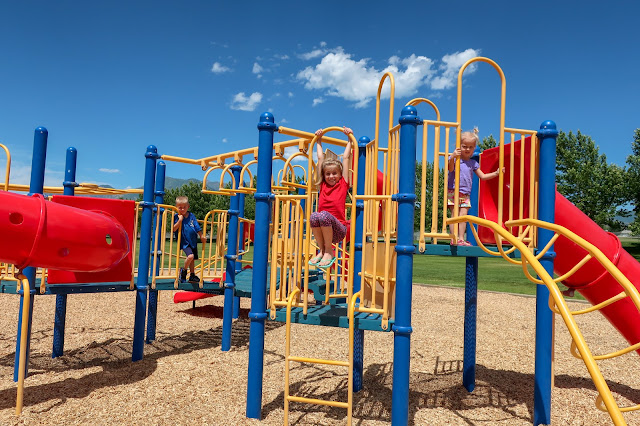 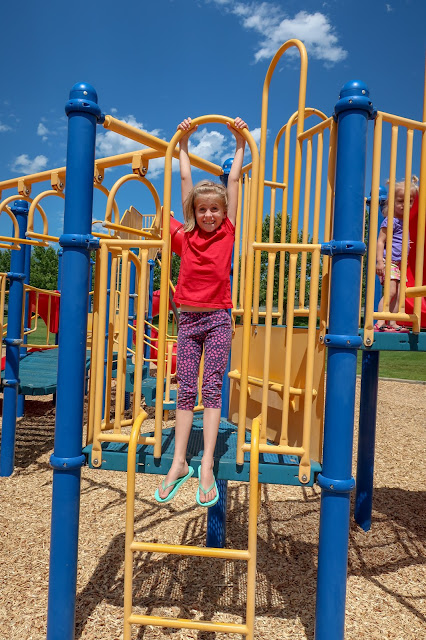 Alexander mostly stayed put in the shade of a tree: 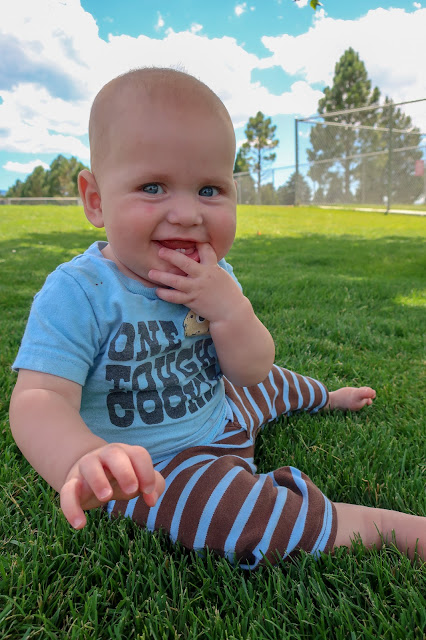 Although the playground itself is completely exposed, there was a lovely row of benches under some mature shade trees, so that was nice. Alexander is such a brave explorer. He isn't scared of new surfaces and easily moves from carpet to tile, from grass to woodchips. He's happy to crawl on anything. So he did quite a bit of crawling while the big kids were playing on the equipment. 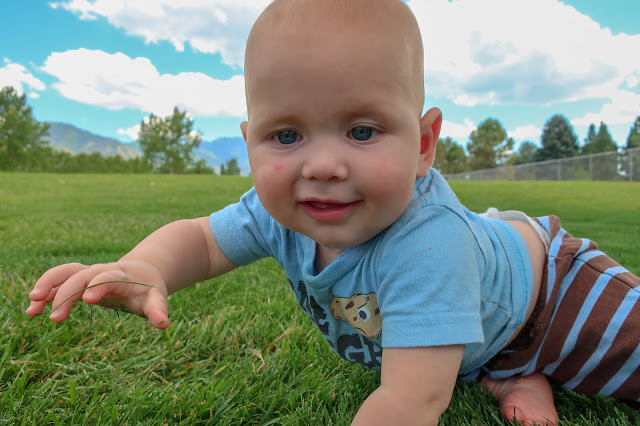 When we got ridiculously hot and had finished off all our water we decided to stop by the Icelandic Monument on our way home (because Iceland is cooler than Utah, right?). Apparently the first Icelandic immigrants to ever come to the United States were Mormons, the majority of whom settled right here in Spanish Fork. Go figure! Every year there's an Icelandic Festival hosted here—and good thing I just read about that because it's tomorrow (through Sunday) so perhaps we'll have to check it out. 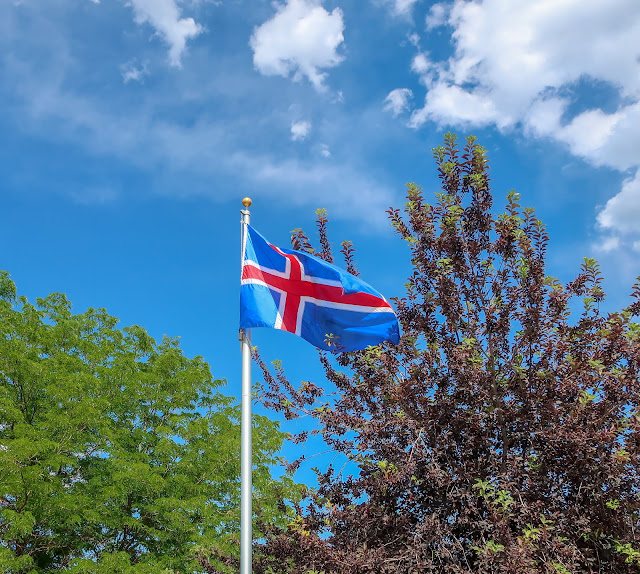 It looks like there's at least a cutout of a viking boat that you can take a picture with. Benjamin was seriously disappointed that there wasn't a viking boat at the monument (no swings, no viking boat; what a terrible, horrible, no good, very bad day) so going to the festival might make it up to him.

The monument is on a corner plot of land just off of Canyon Road. It's rather small and backs onto residential property (I'm not sure I would like to live in the house just behind it; the people who live there were in their backyard and I wasn't quite sure how to interact with them—smile and wave, ignore them, say hello?). 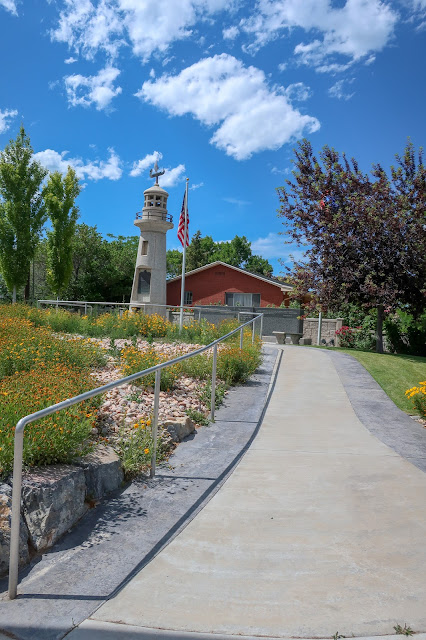 There's a sign with the names of all the Icelandic settlers (410 of them): 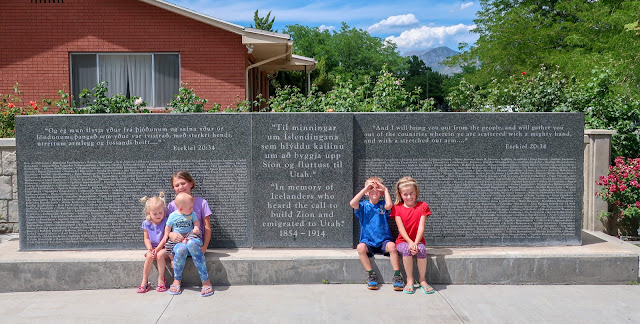 There's a lighthouse (with a wee viking ship on top (which Benjamin considered wholly unsatisfactory)): 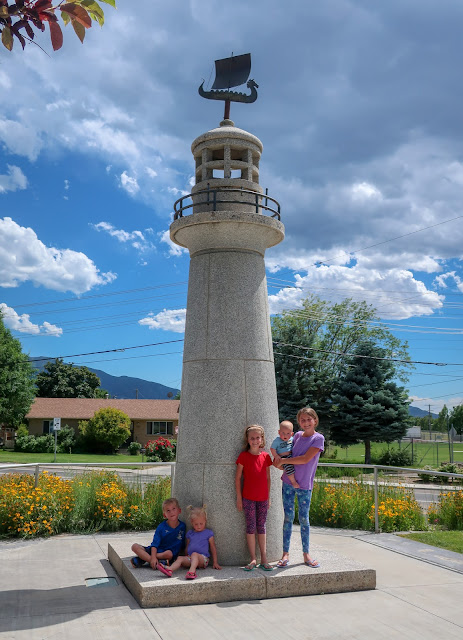 And there's a rock from Iceland itself: 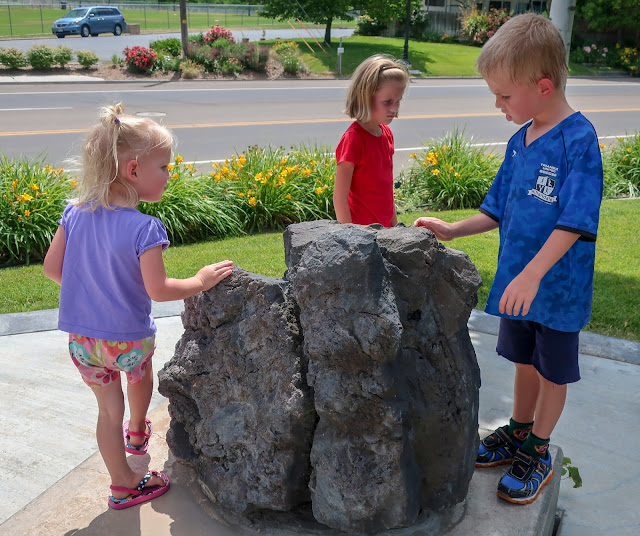 There are a few benches around to sit on—just watch out for wasp activity before you sit! 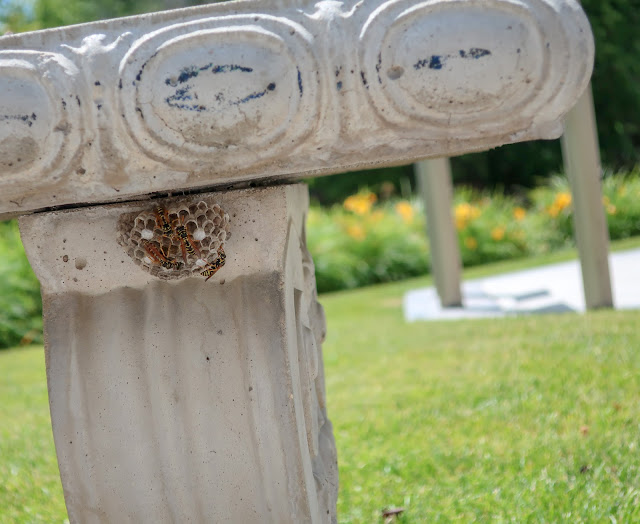 Unfortunately, it wasn't any cooler (or shadier) in this little piece of Iceland than it was in the surrounding areas so we went back home to enjoy popsicles and air conditioning.

We'll have to explore Dripping Rock another time.
Posted by Nancy at 6:53 PM