Yesterday the kids and I played a game of bowling on the Wii (and—not to brag, but—I totally won; with a couple of turkeys my score was well over 200) and then they were talking about how fun it would be to go bowling in real life (you know, because clearly we're awesome at bowling (according to the Wii). So this afternoon the kids and I headed into campus to meet Andrew at work for a family date.

We went to the Cannon Center for dinner. The older three kids all chose to have the chicken-fried steak/mashed potatoes/mixed vegetables plate for their main course while we were lucky to get Zoë to eat "fruit poops."

Oh, you haven't heard the fruit poop story? Well that's because I feel like I hardly have time to sit down to write anymore because someone is always crying (stop crying, children, so I can write your histories).

The short and sweet version of this story is that I do my best to avoid serving my children "sugar cereals," the exception being their birthdays when they get to choose whatever birthday cereal they want. Their most popular birthday pick is Lucky Charms (or whatever rip-off brand is available) so Zoë hasn't yet been exposed to a wide variety of sugar cereal.

When we went up to visit Auntie Emily's family back in April, we stayed at a hotel that had free breakfast and their little buffet included Froot Loops (or whatever rip-off brand it was) and Zoë was 100% sure that she wanted those. But she was also wearing rainbow pyjamas so she was pretty darn cute with that bowl of Froot Loops.

She turned to him in disgust and snarled, "I am not a fruit poop, Benny!"

Now she's a little bit hooked on fruit poops, so it's a good thing we don't have them at our house. But the Cannon Center had them and that was all she wanted for dinner.

(Another side story: Did I tell about how I kept meeting people from Calgary in the lobby of the hotel and so I was super excited when my mom asked me to come up to Alberta with her? And did I tell about how one of these little old Calgarian women came up to us at breakfast (on Sunday morning when half of us were already dressed in Sunday clothes (Zoë was eating a bowl of fruit loops in her rainbow jammies)) and said, "I can tell you're Mormons because I am, too!" and then she went on to say how cute our baby girl was and Benjamin, who always says what's on his mind, said, "Uhh...our baby is a boy," and the lady said, "Oh, well...he's cute enough to be a girl!" and I was like, "Huh?" because I didn't know that boy babies came uglier than girl babies. I thought babies were all just typically cute.

A side, side story: My friend's little girl, a rising kindergartener, told her older brother that all boy babies come out half-girl. He refused to believe that and when questioned about her theory she explained that it was because boy babies come out looking cute and girls are cute, ergo boy babies are half-girl (but they grow out of it).

So maybe Alexander just hasn't grown out of his cuteness yet?)

Where were we? Cannon Center for dinner, right.

Fond memories of eating BYU buffet style for sports camps, that's for sure. We even happened to hit up the center the same time as EFY so there was all the chaos of a zillion teenagers milling about, occasionally smashing dishes and so forth.

We all had a good time eating whatever we wanted. And then we headed to the bowling alley. I hadn't told the kids we were going to go bowling (though Andrew did spill the beans at dinner) and just told them to each put a pair of socks in the diaper bag (because they all wanted to wear sandals, naturally). It was fun to hear about all their theories about the socks.

Were we going to go to the ice rink? A trampoline place?

They made some pretty good guesses! But bowling made sense, too, and they were quite excited to try out real bowling (even if they hadn't guessed we were going to go (I'm assuming their guesses are things they are interested in doing)).

We learned that bowling in real life is quite a bit more difficult, but perhaps a little more fun, than virtual bowling. 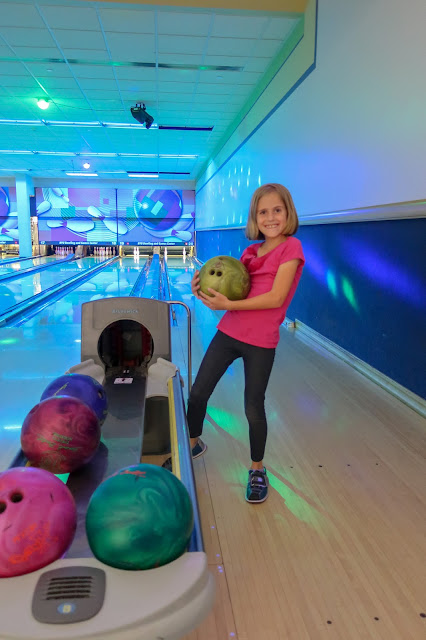 Our scores were overall much lower than they had been on the Wii, but Zoë and Benjamin probably did about the same as they did virtually and physically bowling actually kept their attention, so that was good. 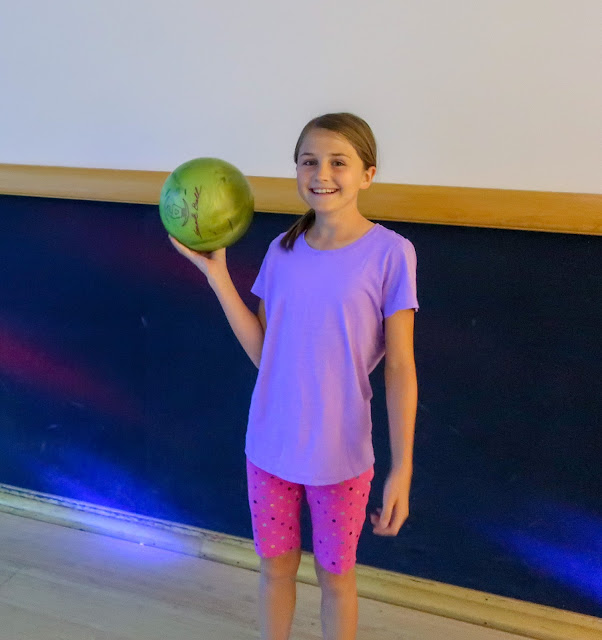 Andrew told the kids about how he'd taken a bowling class the summer Rachel was born—right in the very alley we were playing in. Unfortunately, he's a little bit rusty. Fortunately we had the bumpers up and he played off of them royally. 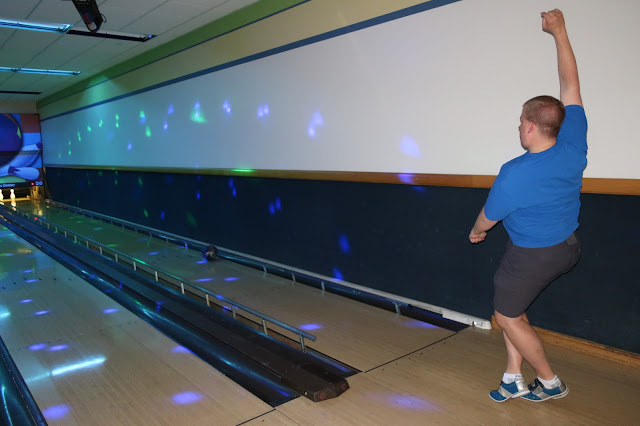 "I just want to break 100!" he declared when we had a few frames left. 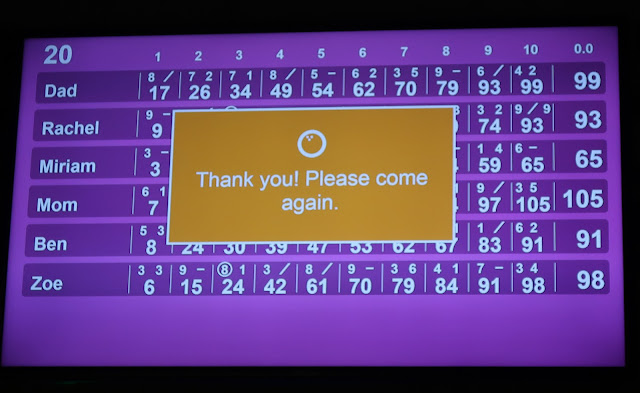 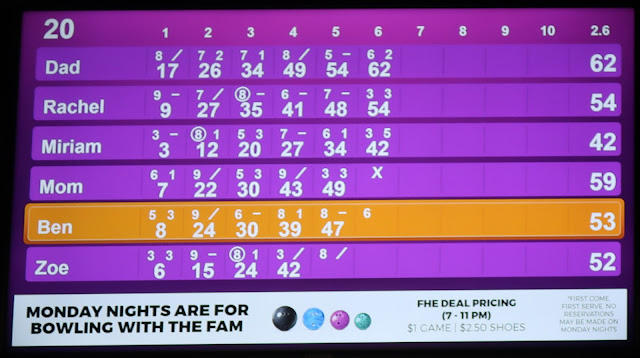 Benjamin and Zoë not only had the help of the bumpers. They also used the little ramp thing: 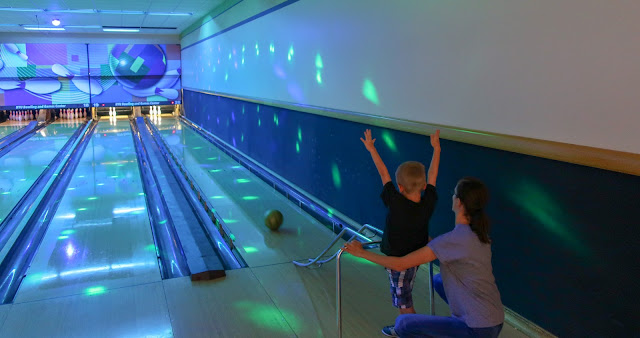 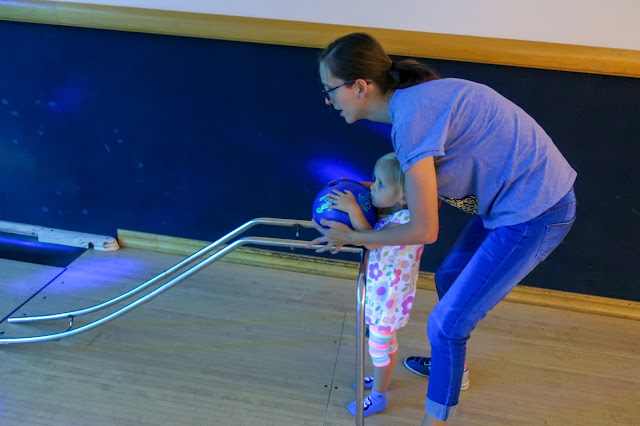 I told the kids about five-pin bowling, which I grew up playing, where the ball can fit in the palm of your hand (and only weighs about three pounds), you get three balls per frame, and each pin you knock over is worth a different amount of points (set up in a V with the back pins worth 2 point, the middle pins worth 3 points, and the centre pin worth 5 points for a total of 15 points per game). Apparently it's both a "Heritage Sport" of Canada and was voted the 4th-greatest Canadian invention (created in 1909 by Tommy Ryan from Ontario, who felt 10-pin bowling was too strenuous—and, guys, it kind of is! Canadian kids don't need a ramp to go bowling because we make our balls as wimpy as we naturally are). 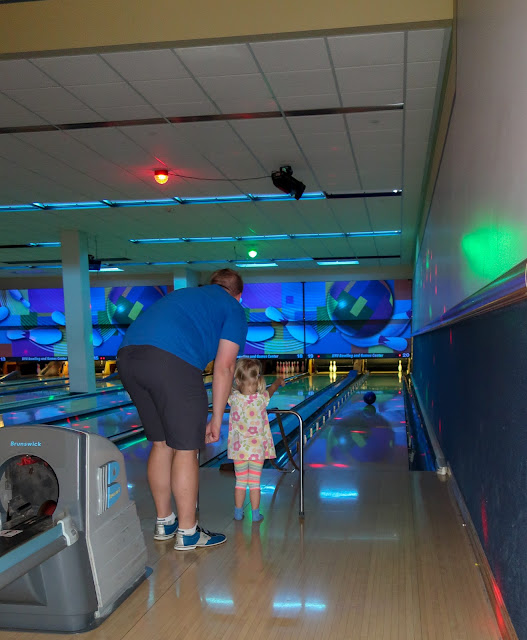 My kids thought having a smaller ball would have been great! Maybe we'll take them bowling up in Canada just so they can see how we do it. You know, the right way.

(Just kidding! This is one of those cultural things that is neither right nor wrong, but simply is.)

At one point, Benjamin grabbed Andrew's 16 lbs. ball and Andrew was like, "Whoa there, buddy!" but I was like, "Meh. He carries Alexander around and Alexander is heavier than that. And it's not like he has to throw the ball. He's just pushing it down the little ramp."

Alexander wanted to get in on the fun as well: 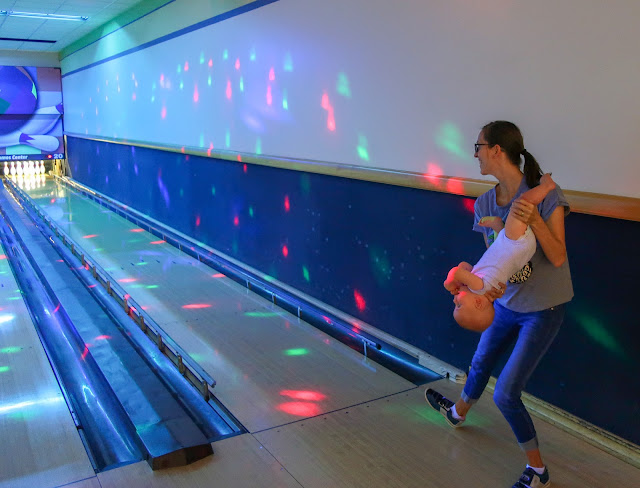 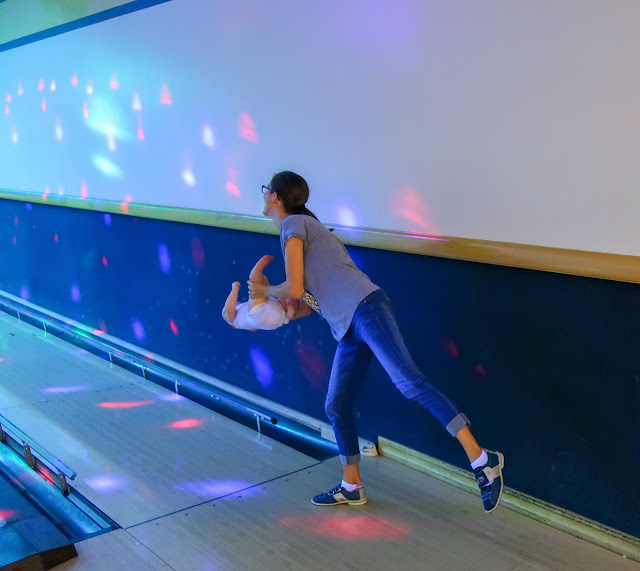 Just kidding. I mostly stuck to 10–12 lbs balls and Alexander mostly hung out here, in Daddy's arms (or some variation thereof (like in my arms)): 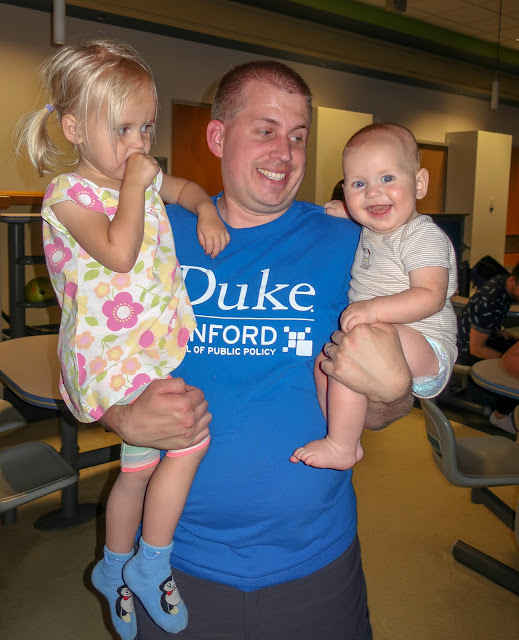 There was plenty of silliness going on between turns: 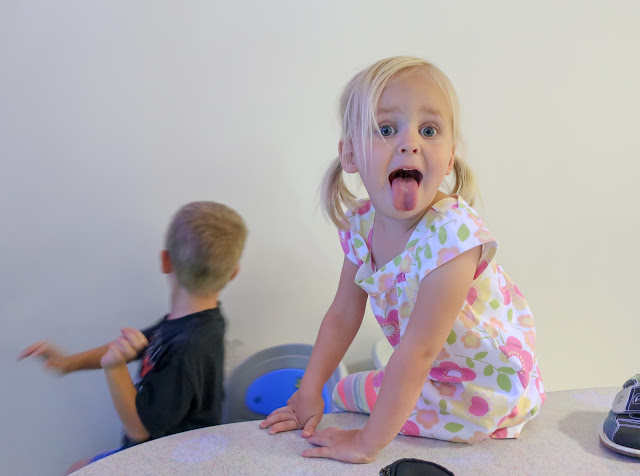 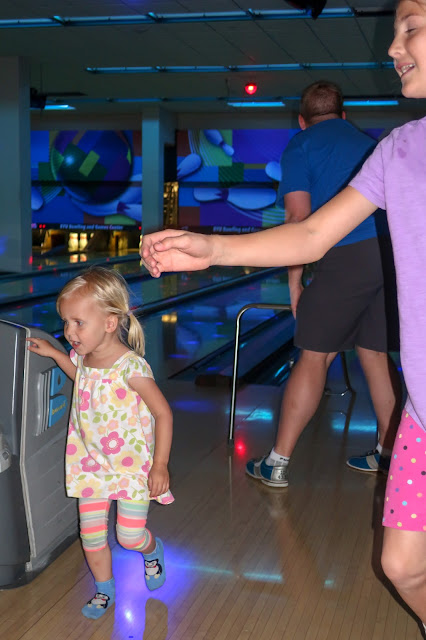 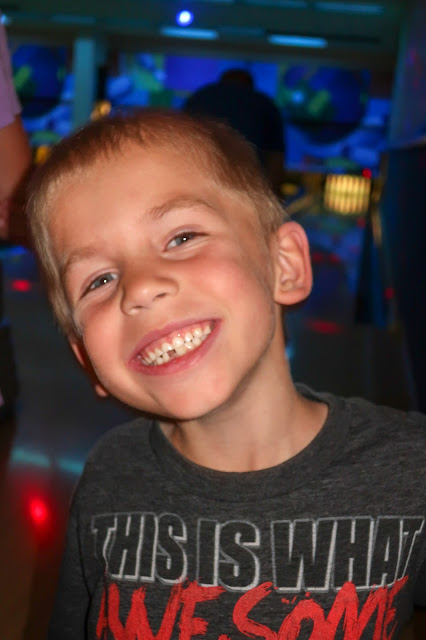 At one point Miriam leaned on the score-keeping monitor (back in my day we had to keep score by hand, kids) and sighed, "Thanks for bringing us here, Mom!" 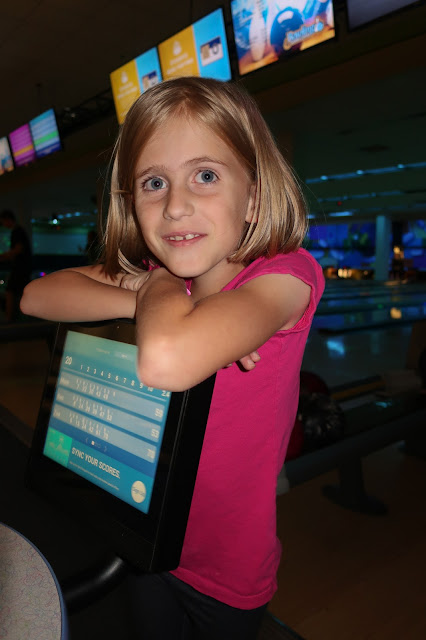 I'd say it was a successful outing (even if the older girls said that virtual bowling pretty much just as much fun).

Here's our attempt(s) at a group picture: 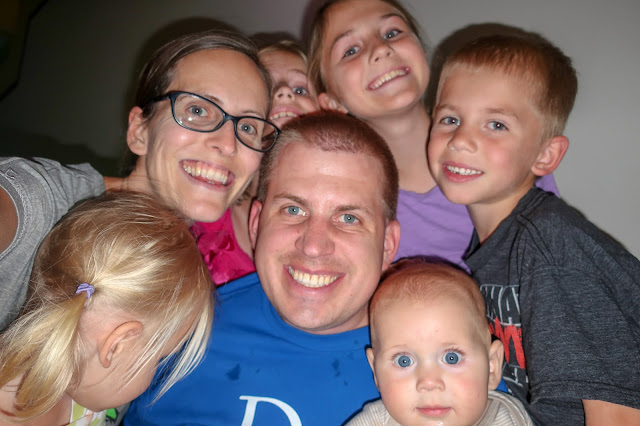 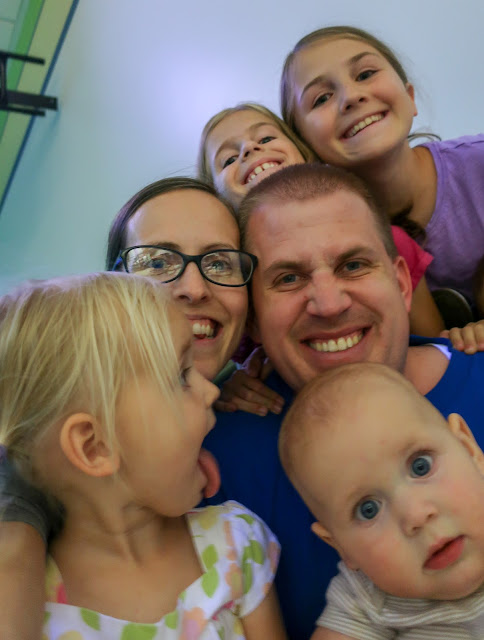 And now for a bonus story: My sister Josie recently went through her wardrobe, which meant my wardrobe got an update. I wore a shirt with a big pineapple on it today (from Auntie Josie's stash) and when I was carrying my tray across the Cannon Center, Benjamin looked across the room at me and then said, "What?! No fair! Where'd Mom find that big pineapple?!"

"That's Mom's shirt," Andrew said. "And...you have a bowl of pineapple in front of you!"

You never can tell what you'll find at a buffet, though!