Our little neighbour boy says y'all all the time and every time he says it I find it both shocking and adorable. He is so polite and articulate—as a southern gentleman should be—and then throws in that y'all and it just...is so adorable. I have to squeeze my lips together to keep from laughing.

Today when I tried to send him home so we could have dinner he turned the tables on me and invited Benjamin to accompany him to dinner at his house.

"Are you sure it's alright with your parents?" Benjamin asked, knowing full well that his little friend had not been home to check on the matter.

"Oh, sure!" his friend said. "It's okay with them if it's okay with y'all's parents! You're not allergic to pizza, are you?"

I had to really work to stifle my laughter after that remark. In the end, both Benjamin and Zoë raced up the street to see if they could share a pizza dinner at their friend(s)' house (this friend has a little sister Zoë's age) because, said Zoë, "he said y'all, Mom, so I'm invited, too!"

As soon as they left I rushed to find my phone in order to text this little boy's parents.

"My kids are on their way to your house. They are under the impression they are invited for dinner. If this is alright without, it's alright with me. If it's an imposition, send them on back!"

The kids were all so excited that they got their little pizza party and they had a fabulous time from what I hear. They raced home together—in the dark!—thrilled by their taste of independence and happy to have missed out on leftover night, which is what we'd done at home.

So our dinner tonight was unusually quiet, just me, Andrew, Rachel, Miriam, and Alexander.

After dinner we cleaned up in half the time, with half the whining, and then sat down to play a round of "hand and foot" while the baby did some puzzles by himself (...on an iPad app, but it still counts as puzzle time, right?). It was an insanely peaceful evening, but we were happy to have our little chaos agents home.

They really had quite the busy day, those two! We managed—somehow—to sandwich all our schoolwork between various social engagements. We hit up playgroup at the park (mostly for Alexander and Zoë), which ended with us breaking from the group of sane, well-behaved preschoolers (my children were not in this group; my children were running around using garbage can lids as shields and being altogether wild) to take a chilly stroll down to look at the chilly river. But of course my kids hopped right in!

They had just been looking at the water but then I took my eyes off them for a split second as I leaned the diaper bag up against a tree and... 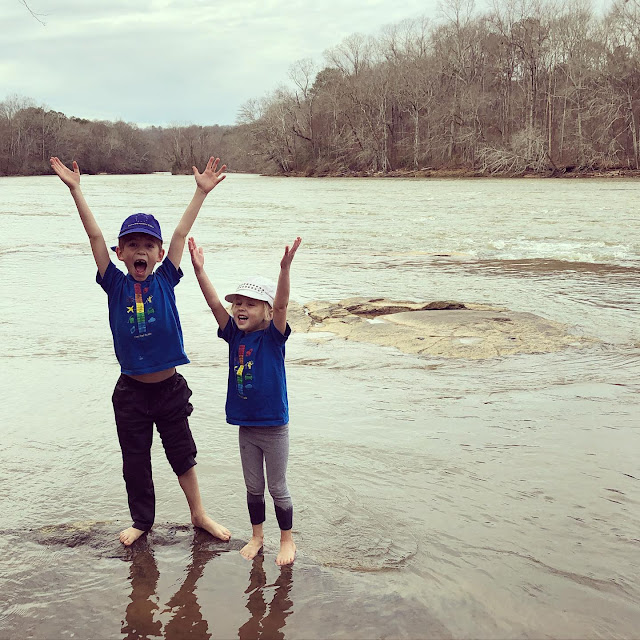 They'd waded across to a little island together.

Are you kidding me, kids?! That water, I know, is 50°F/10°C year round, which is pretty chilly even when it's the middle of summer, but today the air temperature was really no better than the water (now that we've finally decided to have winter weather again; it's been up around 70°F/21°C lately and I've felt a little guilty thinking about my siblings in -40° weather), so it didn't feel refreshing to jump in such cold water. It just felt...cold. Once they were wet we had to go home because they were too cold to enjoy themselves (even with their socks, shoes, and sweaters back on).

Also, they were scared off of their island by a pair of curious Canada geese. They scrambled back to shore and were back up on the walking path quicker than you could say, "Honk! Honk!" 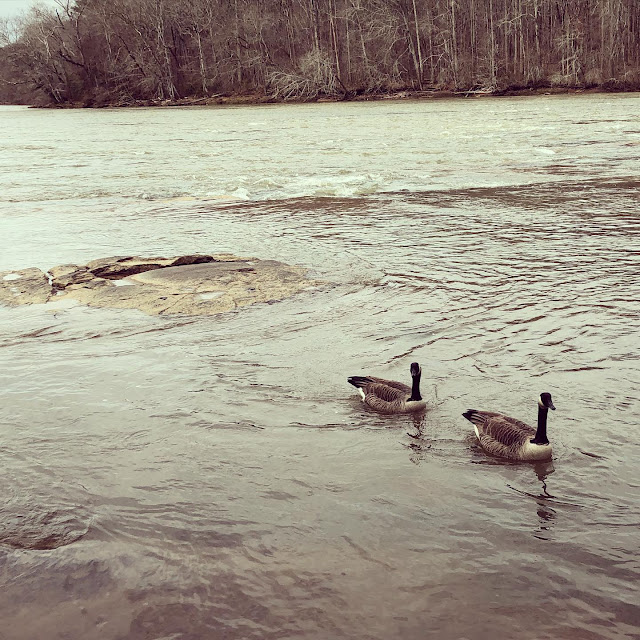 I joked that the water was so cold that they had turned into geese themselves (they disappeared so quickly).

It's nice to see my northern friends down here in the winter. They were such a staple—a somewhat terrifying staple—of my childhood on Canada's west coast. We were always on the lookout for goose droppings and were very careful to steer clear of the angry-looking ones (which was most of them). There's a joke that Canadians are so nice because we simply channel all of our nastiness into our geese.

I warned my children about them (since my children have this...thing...about chasing ducks and seagulls) and in spite of the countless times I've had to repeat myself in this mothering gig, this was a time I did not have to tell them twice. They are terrified of geese.

Because geese are terrifying.

Anyway, we excused ourselves from the rest of playgroup, went home and did some more school work. I'm excited to share the kids' finished products because I'm having them do shadow box puppet show retellings of a fairy tale of their choice. Benjamin chose to do The Three Billy Goats Gruff but he wanted to put a Celtic spin on it so has retitled it "The Three Animals of Ireland and a Knight" only he didn't put the k in knight so I was really confused, wondering how he was going to work the night into his story. But I get it now that I've read through it.

Instead of a troll under the bridge there's a dragon.

And I'm just so happy he was able to put such a Benjamin spin on this story. It's not always easy to get him to write, but this story is four pages long and that's a real feat for him.

Miriam, for her part, retold the story of Little Red Riding Hood in a rather traditional fashion, and that's okay, too. She's been using other writing as a more intense creative outlet.

So, we did more schoolwork and then a set of homeschooling friends came over for a few hours, just to play (our kids' ages match up rather well and we had 9 kids (well, 10 when our neighbour joined in) tromping in and out of the house)), which was fun. And then Benjamin and Zoë wormed their way into having dinner with the neighbours.

It was an intensely social day, but I suppose one of those is a healthy thing every now and then for our little social butterflies of chaos.
Posted by Nancy at 12:40 AM