Potty training Alexander has been, at least when compared to potty training his older brother, a breeze. I realize we've been at it now for over two months and I'm not sure I'd quite say that we're finished yet, but it's going very well.

We went through a very Pavlovian phase where Alexander would come find me whenever a timer went off anywhere in the house to tell me it was time to go potty. That's because when I started out, I would set the timer for every 15 minutes and take him potty very routinely (otherwise I'd just forget about the poor boy; I have so much chaos going on in this joint). So when I decided that he was good enough at knowing when he needed to go and stopped using timers, his poor little brain took a while longer to give up that little prompt.

So, for example, if he was colouring at the table and I was making dinner in the kitchen and a timer went off, he'd run up to me and announce, "Time to go potty!"

Or if the kids were downstairs in the basement cleaning up and we set a timer to motivate them to work faster, Alexander would be on his way racing to find me the minute it went off.

It took us awhile to catch on to why he was suddenly so verbal about needing to go potty (when otherwise he's pretty quiet about it). But it was only because hearing that alarm signaled to his brain that it was definitely time to go potty.

He's mostly forgotten about that by now and we rely on either him telling us he needs to go potty, or simply remembering to take him potty every few hours.

Sometimes he's golden and will tell us when he needs to go; other times he's not very dependable in this department.


One Saturday he was in the basement playing with the kids, Andrew was on the middle floor working in his office, and I was upstairs doing something. Alexander took of his pants and underwear downstairs and proceeded to walk past all the kids, up one flight of stairs, scamper butt-naked past his father, and up another flight of stairs to me. "Can oo take me potty?" he asked.

I was so proud of him for finding me (but also wondered to myself why he couldn't have asked one of his sisters or his father to take him potty)! Obviously he's not very independent when it comes to going potty, though he has actually found it and sat down all by himself a couple of times.

The problem, I guess, is that the only little potty is upstairs in my bathroom and there's no window in there, so he won't go into the bathroom unless someone turns the light on for him (since he can't reach the light). And he's not great at climbing up onto big potties yet.

Anyway, sometimes he's great at letting us know. Other times it seems like he would rather do anything in the world than go potty. Today was one of those days. The child needs to poop, I'm telling you! But he's holding it in, despite my telling him, "Today's a pooping day!"

I will be telling him that tomorrow as well because he would not poop today.

I caught him—multiple times—poised and ready to do a secret poop in his pants but I guess interrupting him and moving him to the potty harshed his vibe enough that he simply couldn't go on. So we went through multiple pairs of slightly-soiled underwear with nothing to show for it.

(As testament to how horrendous potty training Benjamin was, though, you should know that I have only put half of Benjamin's 2T underwear into Alexander's rotation so far. There's still a whole stash in a box downstairs that haven't been touched. So either Benjamin went through many more pairs of underwear than Alexander ever has or I'm getting better at being on top of the laundry situation (and as much as I'd love to tell you it's the laundry thing...it's not the laundry thing). Also, we never really worry about taking Alexander anywhere wearing underwear. I don't worry about taking him to the park or the library or sending him to nursery; he's always just been fine (I mean, obviously he hasn't always just been fine going to nursery (goodness knows that's not the case), but I've never worried about sending him to nursery wearing underwear...the past month that he's gone to nursery). He also stays dry during his naps and usually at night, too, so that's pretty cool).

Anyway, since Alexander was being a literal stinker this afternoon, I asked Rachel to make dinner when she came home from school so that I could spend some time coaxing Alexander to "just give me one good push!" She said she would and I heard her puttering around in the kitchen but by the time Alexander and I had gone through all sorts of mental gymnastics and read all kinds of stories and then had given up on the whole ordeal, she wasn't that far into making dinner at all.

"Nothing," she said. "It's taking the regular amount of time."

"No. It's taking forever. Are you sure you haven't been...I dunno...goofing off down here?"

She forcefully denied my accusations. "I've been 100% focused the whole time!"

"I've been working the whole time!"

"She's been too busy putting ice cubes into the water to focus," Miriam snitched.

"Okay, sure," Rachel admitted. "But putting ice cubes in the water hasn't been slowing me down! I've just been standing around waiting for the water to...oh. Oh, I see."

She must have gone through a heck of a lot of ice cubes!

But that water did eventually boil and we did eventually eat dinner (Andrew obviously was having a late night or he would have been making dinner (and/or throwing ice cubes into the pot with Rachel)), but Alexander did not eventually poop.

But tomorrow is a pooping day, so he's still got time...

Here's a picture I took of Rachel and Alexander chilling in my room the other day, looking so big and small at the very same time (Alexander looks a little spaced out, but that's okay (he's been a little under the weather the past few days)). You can have it, as a treat. 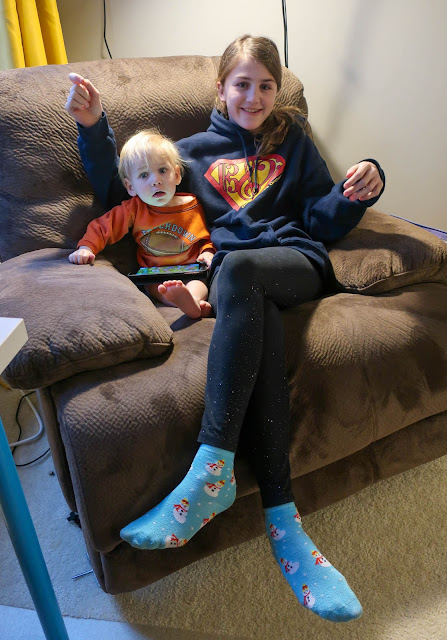