In which Alexander (maybe) conquers his fear of nursery

"Will you stay?" he begged on the way to nursery.

"Oh, I'll stay for a while," I told him, and this was fine since there was only one nursery leader there for the time being. The nursery felt rather empty since all the three-year-olds have been booted out (they're Sunbeams in primary now, which means that suddenly Zoë is not a Sunbeam) and Alexander seemed to enjoy the more peaceful, less populous, atmosphere.

Still every few minutes he turned to me to say, "Will you stay? Stay here, Mommy. Stay."

At one point he even left me of his own free will! He saw another little boy climb onto a teeter-totter and ran over to join him. They sang "Up and down! Up and down!" together for a few minutes before going their separate ways. 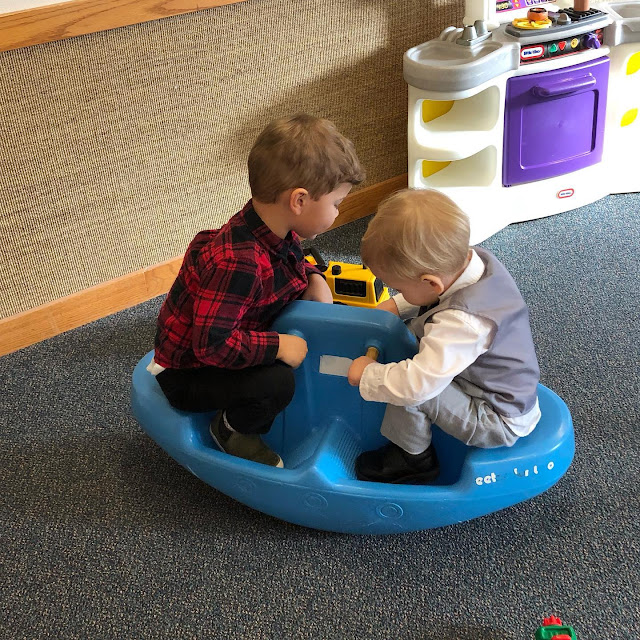 "Don't leave," he said when he overheard me talking.

"Well, I've got to check on Daddy in his class and make sure he's being good," I said.

"Yeah. I have to make sure he's doing alright in his class, too, okay? So I have to step out but I'll be back. I won't be gone long at all!"

Surprisingly, he seemed to buy this explanation and bravely gulped down his tears, found his seat, and sat down for snack time. The teacher who had held him last week (while he cried and cried and cried) stepped in behind him to block his view while I sneaked out...a little early because he'd been doing so well about interacting with his little friends (instead of just standing there, bawling).

But no one came to get me so I figured everything was alright. And it was!

I pretty much figured it would be when I saw his music teacher stand up to leave at quarter til the hour. She spends the last fifteen minutes in nursery singing with the kids and Alexander adores her. If he had been upset, he would surely calm down for her. Maybe. I mean, he adores her from afar but I don't think he's ever let her hold him or anything like that.

Anyway, when I went to pick Alexander up—basically running out of the room after the closing prayer—he was happily running around with the other kids, popping bubbles. They had to tell him several times that his mom was here before he stopped playing and turned to me with a big smile on his face.

And then everyone told him (and me) what a good job he'd done. He cried for just a little while and enjoyed himself for the rest of the time. I'm hoping this is the leaf turn we've been waiting for. This has felt like such a long journey. It's been 9.75 months! We've been trying to get him to enjoy nursery for nearly ten months!

I think, though, that doing it slowly and as tearlessly as possible was good...even if it was long. Because now, perhaps (at long last) he can enjoy his last year of nursery anxiety-free.