We went to the park this afternoon at a time I felt was getting rather too late, but it turned out to be a great time to go! There were so many other children at the park; my kids had a blast! I hardly saw Zoë and Benjamin—they were off making friends and playing make-believe. They didn't want to leave when it was time to go and came home filthy and tired. It was perfect!

Miriam and Alexander hung around with me a little more. There weren't many older kids there (or any, really) for Miriam to play with and Alexander is only brave enough for fleeting encounters with other children before he runs back to find me again. It's not that he's unfriendly. In fact, he's very friendly and called everyone there "my friend."

He even ran over to a little "ice cream shop" that a little boy was working, and gave him a handful of wood chip money in exchange for a wood chip ice cream cone (but he ran away before the other little boy could give it to him, so the next time he went up to the counter with a handful of wood chip money the other little boy just chucked the wood chip ice cream cone at him and Alexander was very upset that "my friend throwed things at me" and I had to brush off his jacked for him). Mostly, though, he just hung around me and asked me to watch him do things and to catch him on the slide and to push him on the swing and so forth.

Miriam also did her fair share of asking me to watch her do things: 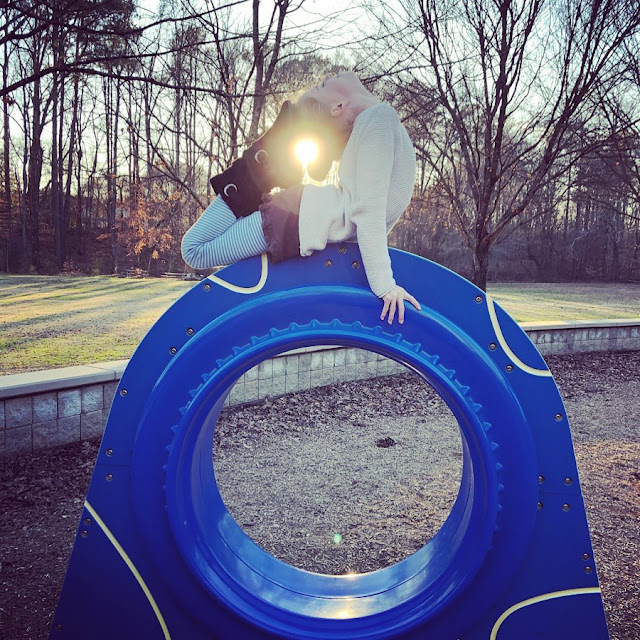 I knew we wouldn't get home in time to meet Rachel or get dinner started, so instead I texted Rachel to ask about her school day...and to ask her to get dinner started. Technology and older kids are both wonderful things!

When we got home I had to help Zoë with her chapped hands, which was quite an emergency because she'd decided that lotion might help them feel better so put some on but they were past the point of lotion helping and so instead of soothing the lotion felt like it was stinging. We washed her hands and I massaged some lanolin into her poor, dry hands (and did so again before bedtime, this time putting on lots and then putting socks over her hands before tucking her in so the lanolin can keep her skin hydrated all through the night). She's feeling much better now.

While I was dealing with that, Benjamin decided to head to the backyard to keep working on his hole. My mom got the kids decibel chart shirts for Christmas and Benjamin has informed us that his hole is at 50 decibels, which doesn't really tell you much except that it's definitely deeper than his waist since the decibel chart is printed above his belly button.

Part of me thinks we should read him Holes next (after we've finished with The Wizard of Oz) because I think Benjamin would really connect with that book right now, but I also know that we have The Secret World of Og coming in the mail (I know this because I ordered it myself) and I'm rather curious to read that book again. I haven't read it since I was in grade four. I'd found a copy in the library at Alice M. Curtis Elementary School (a place which was, for the large part, a rather unenjoyable stint in my academic career) and I remember enjoying it quite a lot, but somehow I got it into my head that it was connected to the story of the The Wizard of Oz when it's absolutely not. But I was thinking about it while reading The Wizard of Oz to my children and figured I should find a copy and read The Secret World of Og to them (since it's by a Canadian author and they'd be unlikely to stumble upon it down here without me purposely presenting it to them).