Zoë had her first willing haircut this evening, her third first hair cut!

Her very first haircut was courtesy of Benjamin and she still talks about how naughty that was to this very day! The second first haircut was when I mournfully fixed what Benjamin had done, cutting off her sweet, sweet baby locks.

Luckily, her hair has grown in (ever so slowly) just as fine and feathery as before so it's almost like she grew her sweet, sweet baby locks back. Unluckily, when that fine, feathery baby hair grows as long as hers has grown it tends to get disastrously tangled and just snaps when you try to brush it no matter how gentle you try to be.

She's been enjoying her long hair, though—putting it into braids and curls and ponytails. Here she is last week looking quite a bit like Shirley Temple (though do not tell her that; she does not like when we refer to her as Shirley Temple or Curly Sue or anything like that): 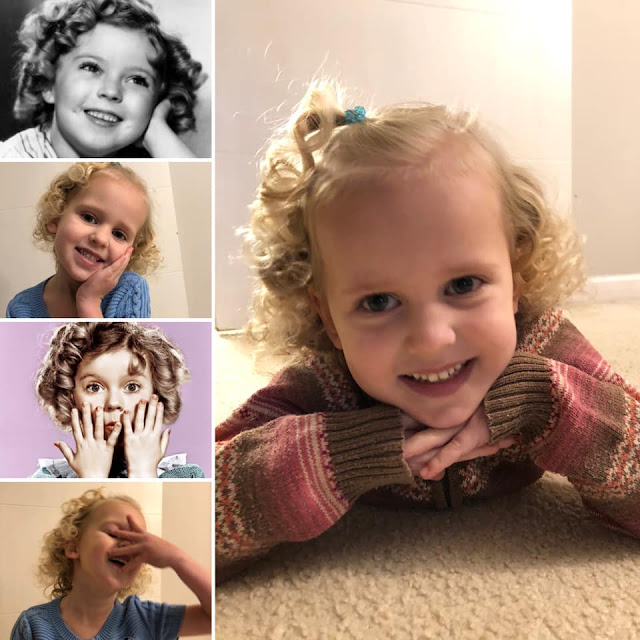 Our little Heflabet book came this past week and Zoë looked through it and came across a picture of herself from October 2018. She had cute shoulder length hair and found herself to be so attractive that she asked me to replicate the cut so after dinner I did my best.

Here she is before with wavy hair (it had been in a braid all day (and you can go ahead and ignore her dirty face; she claimed to have washed it after dinner but she didn't do a very good job (she's telling me, "I did!" in the first picture, meaning that she did wash her face...kind of))): 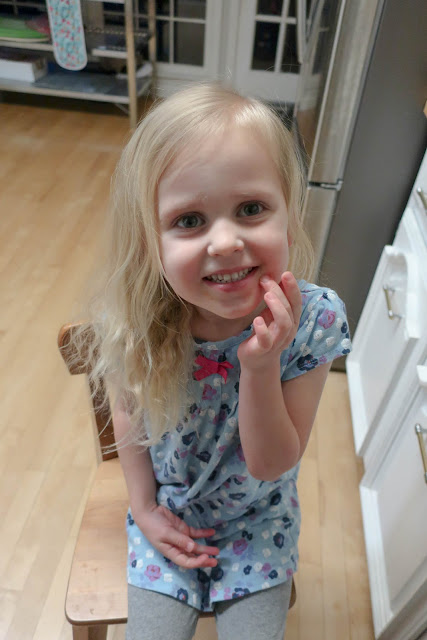 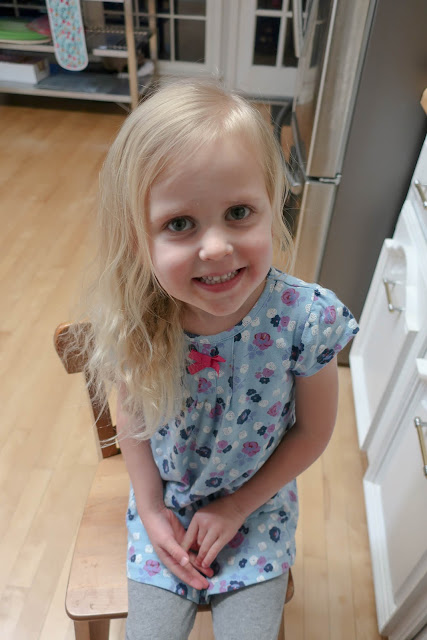 Here's a before shot from the back: 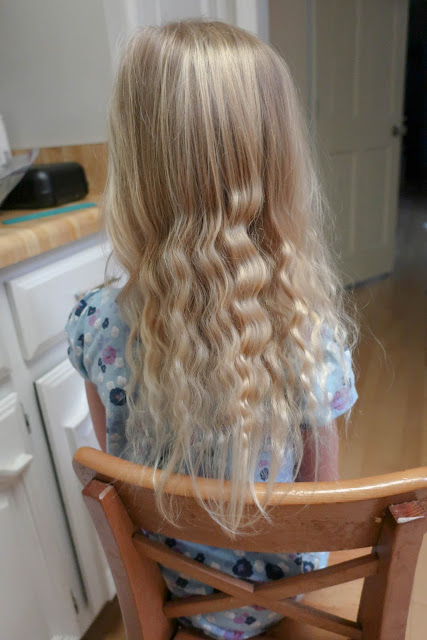 And here's her freshly cut hair from the back: 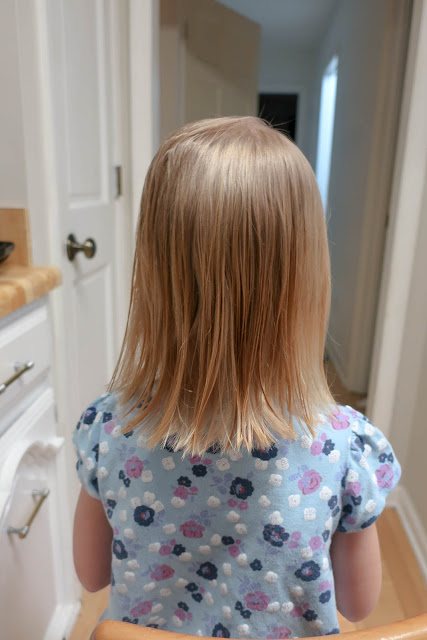 And her new 'do from the front: 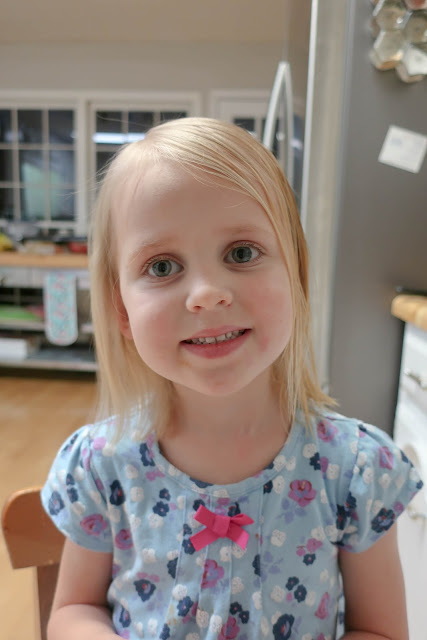 She was pretty pleased with her new look and kept running to various bathrooms to check herself out in the mirror. Hopefully I won't regret it in the morning. I have a hard time cutting baby hair but I guess she's not really a baby anymore (she's four and a half). We also floated the idea of cutting Miriam and Alexander's hair but... 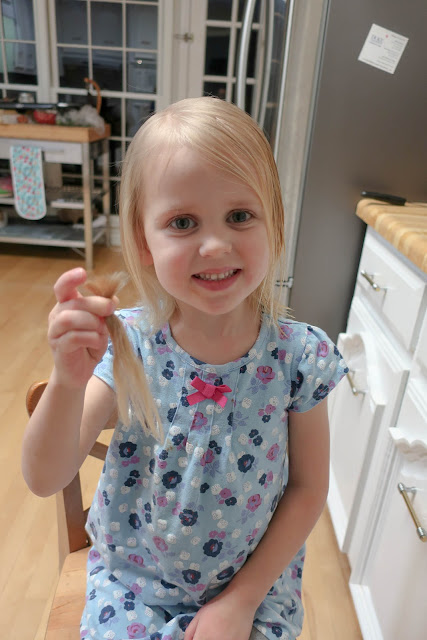 Zoë's hair is so thin that it took only a few snips to get things looking decent. Miriam's hair is thick—probably twice as thick as my own, even—and thus takes forever to cut so I told her we'd have to do it another evening (we had a very busy room-switching kind of day, so now Zoë and Alexander are officially sharing a room and Benjamin officially has his own room and Rachel officially stomped around all morning grumping about why Benjamin gets his own room and she doesn't (though why it didn't bother her that Alexander had his own room is beyond me) and Miriam went around feeling sad because Rachel was grumping about having to share a room with her, but—honestly—this is the best combination at our house right now (I joked to Andrew that if we had just one more baby then everybody would have to share a room and he turned white as a sheet so I'm not sure he's on board with that idea—hahahaha)) because I was just too tired to give her a good haircut this evening.

When you're ten you need a good haircut.

And I don't know what to do with Alexander's hair because I love its fluffy goodness too much to buzz off. I've trimmed it a couple of times (in the back and the sides, but never off the top). It's getting a little longish, though, and (as I said) I don't know quite what to do. I'm not very good at long hair cuts on boys—keeping things tidy and long at the same time...how?!

"We could buzz it," Andrew suggested.

And Zoë totally went off on him.

"Whoa," I said, trying to calm her down. "We're kidding about the buzzer."

"I SAID NO BUZZER!" she said, too out of her mind to comprehend that we'd just told her that we were not, in fact, going to break out the hair clippers this evening. "NO BUZZER! NO BUZZER!"

"We're talking about Alexander's hair being buzzed, anyway, not yours," someone told her, thinking that might calm her down. They thought wrong.

She was shaking with fury, her face was a blotchy red, and she had tears welling up in her eyes. It was...a little wild. So we all...started laughing a little bit.

"No wonder," one of her big sisters snorted.

"IT'S NOT FUNNY!" Zoë screamed again. "STOP LAUGHING! I HAVE A HEADACHE! YOU ALL ARE GIVING ME A HEADACHE! JUST DON'T CUT ALEXANDER'S HAIR!"

"No one is going to cut Alexander's hair," I assured her.

"And only scissors on my hair?" she sniffed, finally calming down.

"Only scissors on your hair," I promised.

It was the most passionate dinner table rant we've had in a long time (perhaps ever) and I honestly don't know what brought on all that fervor. We've never seen her like that. It was...terrifying and hilarious all at once.

So, she got her scissors-only haircut and everyone else made it through the evening without losing a single hair.
Posted by Nancy at 11:38 PM