Today's date is special because it's palindrome day 02/02/2020 and Groundhog Day. On the way to the church one of the kids asked, "What if the groundhog sees his shadow and we get stuck with six more weeks of winter?"

"I wouldn't even care," I admitted. "This winter has been so mild. Six more weeks of this weather is just fine with me!"

Since the weather was so gorgeous we decided to explore a new park this afternoon. Andrew made me drive to help me expand my driving bubble; it helps to have him in the passenger seat when I'm doing exploratory driving (I hate exploratory driving; I've ever so much more calm when I know precisely where I'm going and how I'm getting there).

I mostly took videos at the park, to be honest (and I don't feel like uploading them (what a surprise)), but I took a fair number of stills as well.

This park—Shorty Howell—is one Andrew, Alexander, and I visited when we were out here looking for houses last year. We visited on a very hot and very quiet afternoon. The park was about the exact opposite of that today—it was busy as could be, absolutely crawling with people, and the weather was perfect. We were happy to see so many people out and about on a Sunday afternoon (especially with the Superb Owl prowling around, scaring everyone indoors), but less happy that it meant the playground was so crowded. Luckily this park is one of the several (?) mega sports complexes in the area so there were actually several playgrounds for us to explore.

We first took a little stroll around the duck pond: 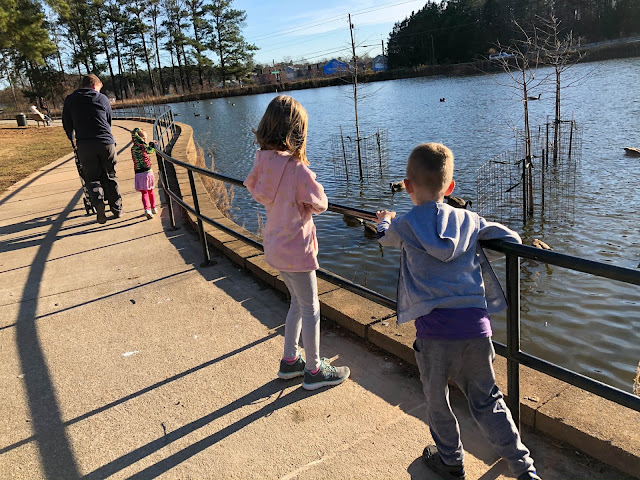 It's mostly Canada geese out there right now, with a few mallards, and a few other waterfowl that I couldn't name off the top of my head. Alexander was in bird-watching heaven. 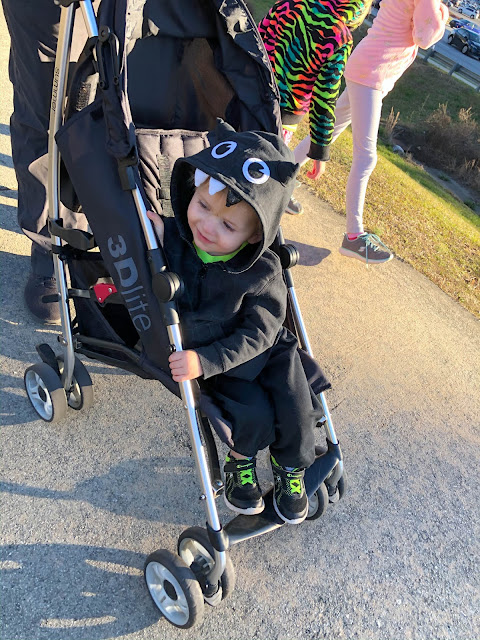 I'm halfway tempted to get a bird feeder for this little guy so he can sit and watch birds all day long, but we have so many squirrels in our yard that I'm sure we'd just end up feeding them. Oh, well.

Benjamin enjoyed this poor tree whose bark had sloughed off somehow: 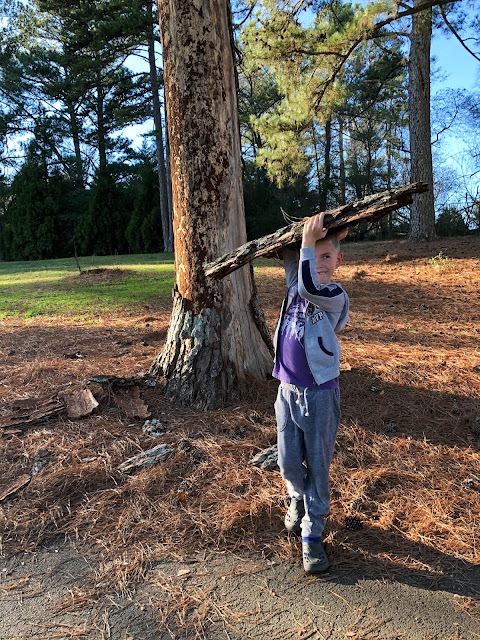 I'm pretty sure that's not healthy... 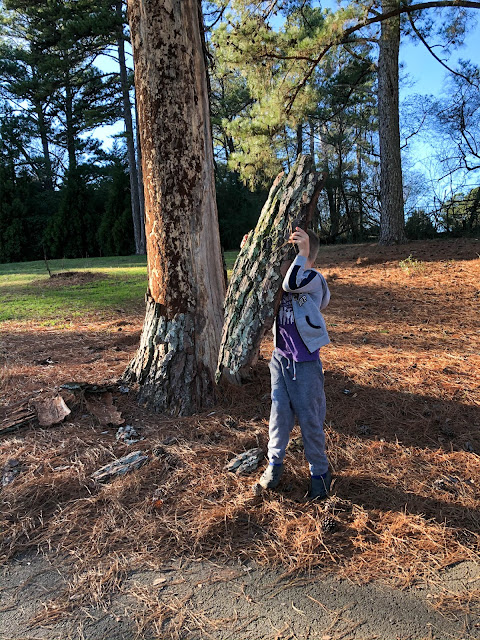 ...it was a pretty ginormous piece of bark! 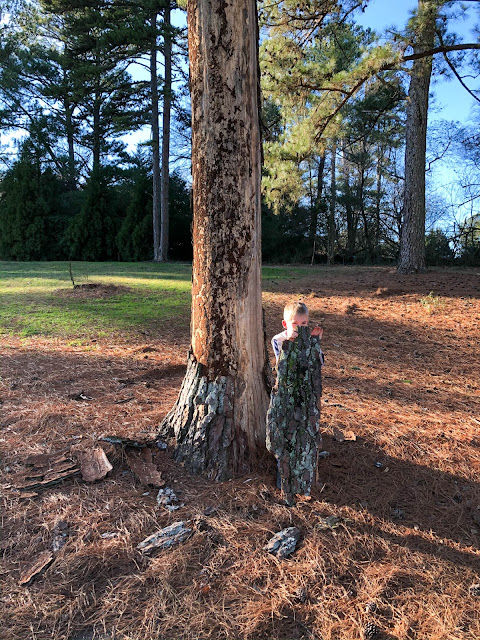 Here he is standing on a tree stump (he really likes this picture, even though the lighting was terrible): 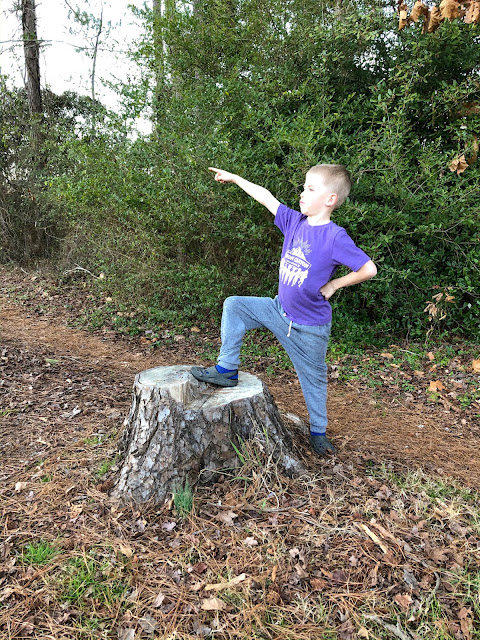 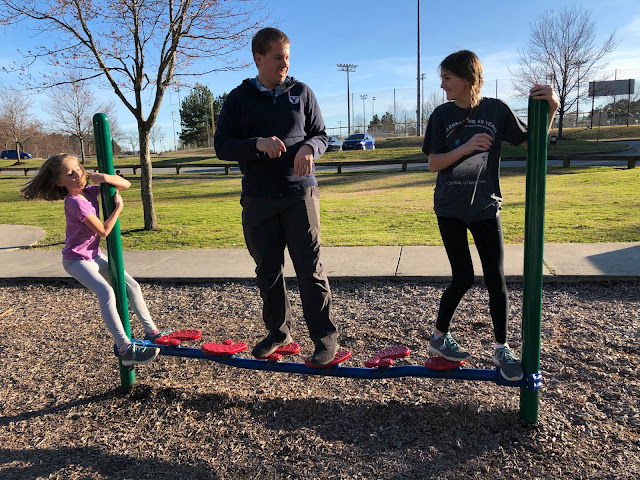 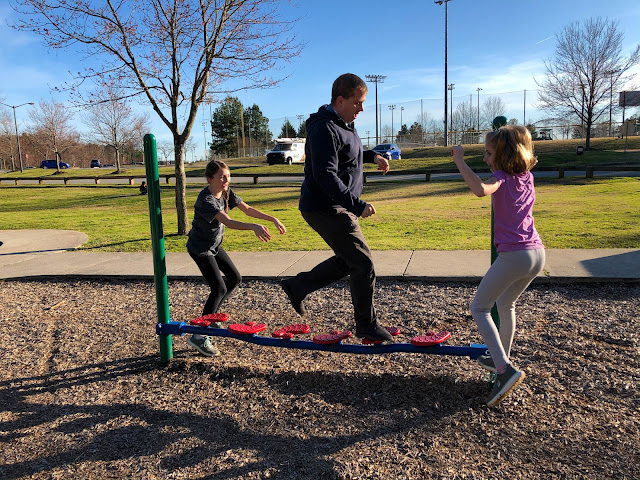 He won pretty much every round; I got in there, too, and he was just tossing all three of us like he was swatting flies.

I should have taken pictures at the playground, but I was too nervous about Alexander, who kept falling all over everything. I took a few videos of him running around but mostly I just spotted him and/or picked him up from the ground after he fell. There was a crazy bouncy bridge that I was sure he was going to fly off of and break his arm (but he didn't), there was the steepest slide I have ever seen in my life, and there was this crazy pedal machine where I believe the idea was to hop on and pedal with your hands and feet simultaneously. It was tremendously complicated to work out (but I'm not really known for my coordination, so perhaps it isn't really as complicated as it seemed to me) but Alexander tried to tackle it several times. Every time he ended up falling off and landing flat on his face, so he has a few little scratches from that, poor boy.

I'm just glad we left the park with all his bones in one piece.

And here's a picture that Rachel and I snapped to send to my mom to show her that we were out enjoying our beautiful day when she wanted to video chat with us (we didn't have enough "bars" to attempt a video call at the time). She reported to us that they were not having beautiful park weather there (which is weird because Andrew's dad reported that they'd had a beautiful, warm day (though they were expecting snow this evening/tomorrow morning) so now I need to go check the weather to see what Andrew's dad classifies as lovely and what my mom classifies as not-so-lovely). 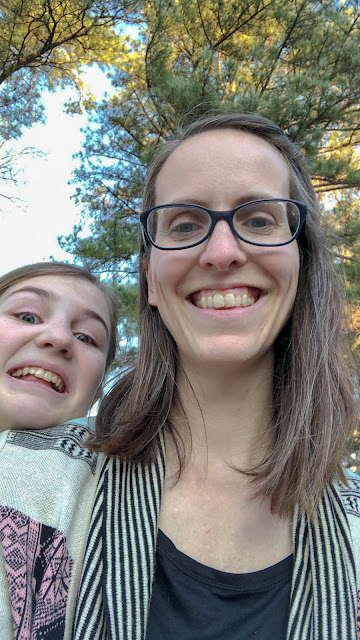