It must be leap year because we're just tripping left and right this month!

We were out walking one fine morning this week—likely the only fine morning on the radar (it's still been so wet and rainy)—and Benjamin and Zoë were racing around picking all the wildflowers they could see. They gathered a lot of purple—with henbit, johnny-jump-ups (wild pansies), and wild violets—some white chickweed blossoms, and a few bright yellow dandelions (a cold-weather weed for us). 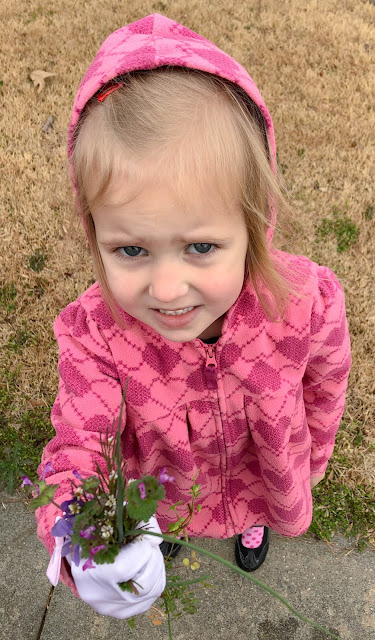 You can see it's not particularly balmy outside so she's got on her winter gear (gloves and a sweater). This morning she picked out a springy dress and then almost thought better of it when she learned the weather report. Instead of changing her mind about the outfit she just put her springy dress on over pants and a long-sleeve t-shirt.

"I feel better now that I've got on my longs!" she announced.

Anyway, back to our walk. She and Benjamin were darting around picking flowers, racing to see who could create the best bouquet. Zoë thought hers was best because it was arranged so nicely. Benjamin thought his was best because his was bulkiest (he looked like he was hauling around a bale of hay (you are welcome, neighbours, for weeding all y'alls yards!)). And then they saw it—a trio of bright yellow dandelions. Surely those flowers would be the cherry atop anyone's bouquet!

They both raced off together...and Benjamin ended up tripping over Zoë, sending her sprawling into the gutter and then he—of course—landed directly on top of her, smashing her face into the curb and scraping up his knees (he was wearing shorts with soccer socks pulled on up to his knees, which I suppose also qualifies as "longs"). Fortunately her face didn't get scraped by the pavement (it merely got smushed into it).

Neither one of them cared about flowers after that, though they both hobbled home clutching their bouquets (or hay bales, as the case may be). We generally don't allow wildflower bouquets in the house because Daddy is so allergic to everything outside, but they're fun to look at while they last. It was even more fun to watch Benjamin limping home, proudly hugging his bundled of weeds to his chest. I honestly don't know what he thought we were going to do with it, but now we have a pile of weeds in our yard, so that's nice...

Here's hoping we've got all our leaping, tripping, and falling out of our system.

We're ready for March—a nice and steady month. Though if we're being honest, we'll all end up marching to the chaotic cacophony of our own various drums. It'll be great.
Posted by Nancy at 10:49 PM