Remember how I said that I really didn't want Alexander wetting my bed and that was the whole reason we were keeping him in diapers at night still? 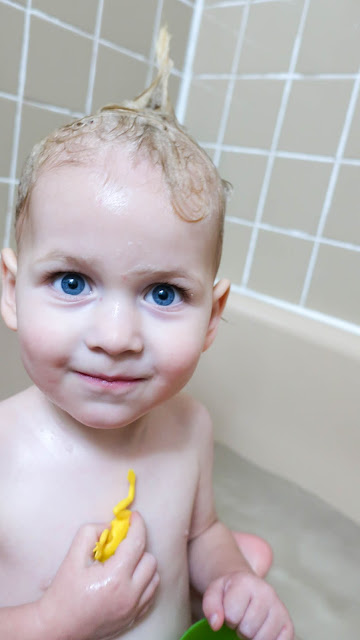 Well, last night when Andrew came home from work I hadn't quite managed to get all the kids ready for bed yet (we were too busy playing UNO), so he got Alexander ready for bed. He was sure to put a pull-up on him and then told me, "This time he is really, truly, honestly in a diaper."

So I tucked him into his own bed and then in the middle of the night when he came to find me I very trustingly pulled him into my bed and in the morning was very, very sad to find that Alexander had peed in the night for the first time in...weeks...probably. Mostly this was sad because that "diaper" Andrew had put Alexander in was a swim diaper.


Commercial swim diapers do absorb a bit of liquid (I know because this one was soaked) but mostly they're meant to be a poop barrier (meaning their primary function is to keep poop contained), not a liquid barrier. They don't have those magical crystals that absorb liquid and swell to many times their size, so there's a very limited amount of liquid they can hold before they start leaking and Alexander definitely surpassed that limit.

So I woke up with a wet bed, which meant not only that I had to change the sheets but also I had to wash our mattress pad (it's normal to not wash those as frequently as sheets, right?), which is a bummer because it's a fancy electric heated mattress pad (that we stole inherited from Andrew's parents) and it's supposed to be cold tonight. It would be lovely to have a heated mattress pad on our bed...but...it's still drying (and will likely need to dry overnight)...so fat lot of good it's going to do us.

Fortunately, Andrew takes full responsibility for this mistake (not full responsibility like he was the one to wash the sheets and so forth (I got that part because I'm the stay-at-home parent) so perhaps culpability would be a better word). I gave him a quick lesson on deciphering between pull-ups and swim diapers (the blue ones are usually swim diapers; the white ones are usually pull-ups unless—like the ones we have—they are covered in fish-themed events and then (apparently) they're swim diapers (sigh)).

This means we're out of pull-ups (apparently there was only one in the batch of diapers Cory gave us and the rest are swim diapers (which will be useful this summer)), which makes Alexander sad because he doesn't like wearing diaper-diapers anymore (he says they're ouchy).

I suppose I could transition him to cloth diapers at night.

I always meant to cloth diaper him, as I did the rest of the kids, but I was just so tired when he was a baby that I couldn't fathom adding those extra loads of laundry. Honestly, I think I remember doing a few weeks' worth of cloth diapering when he was really little...but it was just such an exhausting time in my life that it didn't stick.
Posted by Nancy at 7:52 PM