Yesterday morning we went to a friend's house to practice the girls' song one last time before Sunday. We had planned to walk because they only live half a mile away from us, but the morning got away from us and we found we weren't quite ready to leave the house when we needed to so Andrew dropped us off on the way to take the boys grocery shopping.

Zoë was so excited to be included that she leaped out of the van. It was a rather impressive leap, too—she cleared the curb and everything! She crashed on the landing but picked herself up off the ground and started leading her way to the front door. We were cutting through the grass* to get to the front door and Zoë made it about two steps before she slipped—I wouldn't say it was an icy morning but it was frosty (and what is frost, if not ice)—and slid down the hill to the front door on her behind.

We had a pretty good practice and then said our goodbyes and headed out the door for our walk home.

"Hold my hand," Rachel ordered Zoë the minute we stepped out the front door. "You're going to trip and fall."

"But the stairs are slippery," Rachel cautioned (and they are—not with ice but with moss (things have been so wet that it seems everything in our world is frosted green right now (I have a feeling power-washing season is coming up))). "Hold my hand."

"Suit yourself," sniffed Rachel. And then she herself tripped and landed sprawled out spread eagle on the lawn.

We had a good laugh about that!


Rachel is growing at an alarming rate and doesn't quite seem to be fully aware of where her body is or what it's capable of. This is a normal stage of development, I'm sure.

I was on the trampoline with her and Miriam yesterday and she asked if I'd do a pool noodle battle with her. The kids spend hours out there bouncing around, wailing on one another with pool noodles. This is also a normal stage of development, I'm sure.

"No way!" I said. "You hit too hard. I think you've sent all the kids inside today crying over how hard you've hit them."

Still, I didn't want to fall victim to her pool noodle wrath, so I declined to play. We spent some time practicing back drops and front drops and other easy tricks. And then after she and Miriam showed me this routine they'd worked out with the pool noodles (involving kicking noodles up from the trampoline to soar over their heads and then doing a front roll and catching the noodle before jumping up and striking a fighting stance, and so forth) Rachel asked me to play again.

Against my better judgement I relented and discovered firsthand that Rachel hits too hard!

I figured the worst that could happen would be for my glass to get knocked off my face (and that did happen). What I did not guess would be that they would fly off my face in three separate pieces!

"Game over," I said, scrambling to find all the pieces of my poor, shattered glasses. "I have to go find a backup pair." 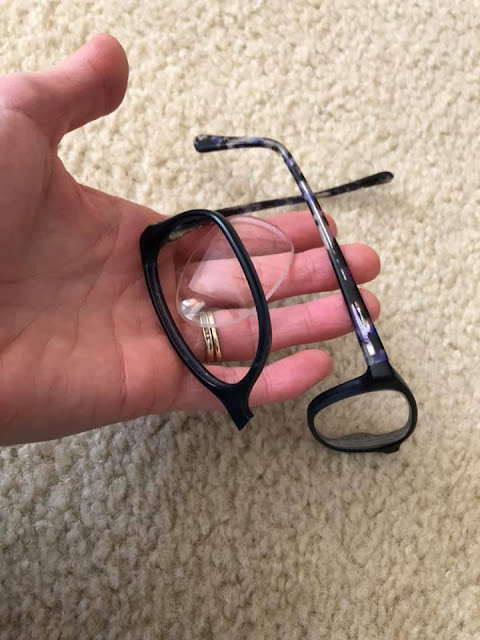 The only problem was that I couldn't remember where I had put my extra glasses. I know some people who change the glasses they wear to suit their outfit, but I'm kind of a mate-for-life kind of person and once I get used to a pair of glasses I don't want to wear anything different. So even though I've often gotten two pairs of glasses at a time I really only ever wear one pair (especially if I'm "brave" and get two different styles of glasses).

I got my broken pair of glasses back with Zoë was a baby, so they honestly should have been replaced by this point anyway but I never found an optometrist in Utah and haven't found one here yet either.

Fortunately, I knew I had another pair of glasses—with the exactly same prescription—floating around somewhere in my bedroom. I know because when I was unpacking things I thought to myself, "Oh, here are my spare glasses. I need to put them in a safe place!"

Unfortunately, that was as far as my memory led me.

I could not remember where that safe place was.

And, honestly, hunting around for glasses without the aid of vision-correcting lenses is...difficult.

I was almost happy when Rachel frantically flew up the stairs to my bedroom to help look (because she has good eyesight) but I was less happy with her searching methods. She started wildly rifling through drawers and searching places I knew for sure my glasses weren't.

"I'll search the bathroom!" she said.

"They're not in the bathroom," I assured her.

"But they're definitely not."

And they weren't. Toothbrushes, toothpaste, tweezers and fingernail clippers are in the top drawer. Hair stuff is in the middle drawer. Feminine products are in the bottom drawer. I use all of the drawers in my bathroom regularly and I know there are no spare glasses lurking in their depths.

She moved onto my dresser.

"Rachel, Rachel," I said. "Please stop running around yelling. I'm trying to think about where they could be."

"I know you feel bad about breaking my glasses. But I'm really not very upset about it."

"I know. But your frantic searching isn't helping me. I wonder if it was in one of those plastic bins that were in our room, that I never unfinished packing and we just moved downstairs."**

Rachel thundered down the stairs and started examining boxes in the storage room. We found the one I was thinking of but the glasses weren't there.

"Where else can we look?" Rachel wanted to know. She ran back up to my bedroom. I chased after her and said, "Look, I know you want to fix this but you're too frantic. What I need is just a moment to look on my own—calmly. Go back outside and help Miriam with the baby. I will find my glasses."

And I found them just a few minutes later.

So now I can see!

My glasses feel weird on my face and my eyes are still trying to get used to the new shape of the lens (there is a certain part my eyes feel certain they should be able to look without me moving my head but my lenses no longer reach that part of my line of sight so my eyes can't see there without me moving my head and it's a little disorienting), but we'll be fine, my eyes and I.

Now to teach Rachel the power of her strength now that she's almost grown. We were arm wrestling the other day and—boy, howdy!—the girl is strong! I mean, I can still beat her (but it takes me a pretty minute to get her down).

* The house is on a corner lot, so the driveway faces one street and the front door faces another street. The only path to the front door begins at the driveway. But Andrew didn't drop us off at the driveway; he dropped us off by the front door. Also, it's a Georgia driveway (read: long and steep) so it just felt easier to tromp through the grass. And I'm sure they didn't mind. People aren't as picky about their lawns in the south as they are in the west (just my general observation).

** You also have a box like this in your house, right? Or is it just me? I mean, I will finish unpacking it someday...
Posted by Nancy at 5:26 PM