Benjamin claims to have slept in this box last night: 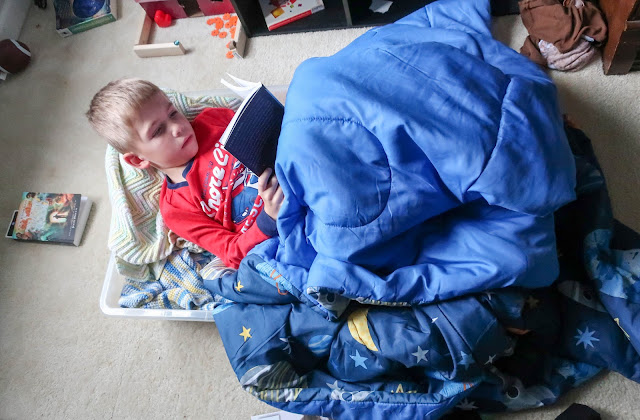 I honestly couldn't say for sure whether he did or not. It doesn't look very comfortable to me, but evidently it's comfortable enough that he spent a couple of hours reading there this afternoon, for which I'm extremely grateful. It's been terribly rainy this week (this year, really) and we've had a bit of cabin fever, so I was happy when he decided to settle down with a good book (or several; he prefers to read more than one book at a time, so you can see he's got a Percy Jackson sequel on the floor behind him but he's reading something different, and is also in the middle of a Who Was? book and has another book or two downstairs that he's reading).


For a few weeks we had a pretty good math truce worked out, where Benjamin would do his math and then I'd "let" him do Duolingo. The laptop has a password on it (a "code" as the kids like to call it) so I have to enter it in for Benjamin to do anything. But then Rachel reformatted an old phone and linked his Duolingo account to that and now he doesn't need a password for Duolingo and math lost its appeal again.

But then I (re)discovered Prodigy, which is a math-based computer game. The kids' teachers encouraged them to play it at home but we rarely found time to get on at home (okay: never. We never found the time to get on at home) because there were so many other things we'd rather be doing—like going to the park and eating dinner and reading bedtime stories. But I heard someone somewhere mention something about Prodigy and thought we'd give it another shot, so I made accounts for both the kids and they've been loving it.

Benjamin willingly does the math work I assign him—and he does a thorough job, too—and then he asks if I can help him get on Prodigy and he plays that forever but I hardly even mind because he's practicing his math skills.

Hopefully it helps keep him motivated! He works so much better when he feels motivated!
Posted by Nancy at 10:00 PM