We have spent literal hours at the park this week. Probably close to eight hours, if I'm being honest. The weather has just been so fantastic that we've hardly been able to help ourselves (but don't worry—we're still getting all our schoolwork done). It's supposed to rain for the rest of the week—we're supposed to get 3 inches of rain tomorrow, for example—so that will keep us indoors, I'm sure. But the lovely spring-like days have been a wonderful reprieve from the wet and gloomy weather we've been having.

Today when we were driving to the orthodontist we came across a row of trees (possibly okame cherries) all bedazzled with pink blossoms—on February 5th! I didn't take a picture because I was driving, but there they were, looking all beautiful as we zoomed on past.

Here's Miriam with more braces instead of fewer (which had been her hope). She had thought she was finished with "phase 1" but we finally found an orthodontist who would take her and we found—surprise!—that one of the teeth we were told she was missing had grown in, so they decided to put some more brackets on and force her to live in braces for a few months more rather than removing them right away. But she's still happy to have a removal date at the end of the tunnel. 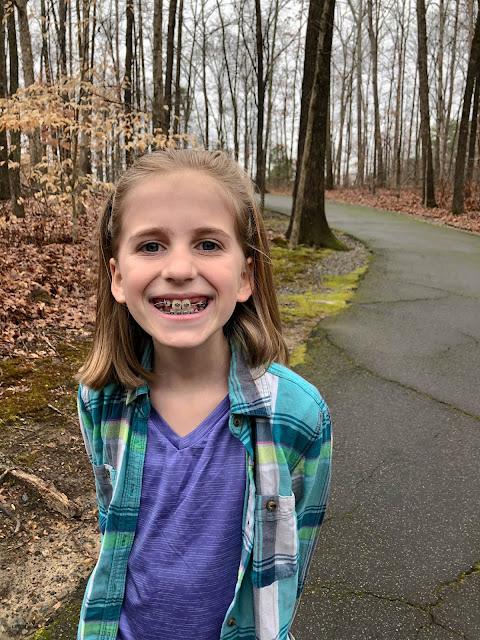 We stopped by the park on our way home from the orthodontist because it hadn't started raining...yet...and I thought it would be good to get some wiggles out before our now-current deluge (it is coming down hard out there). We went for a walk and then the kids asked if we could go seek out another playground they had spotted from the road (now that the trees are bare we can see things from the road better), so we did and the kids had a blast.

Here are a few more pictures from our walk prior to getting to the park. 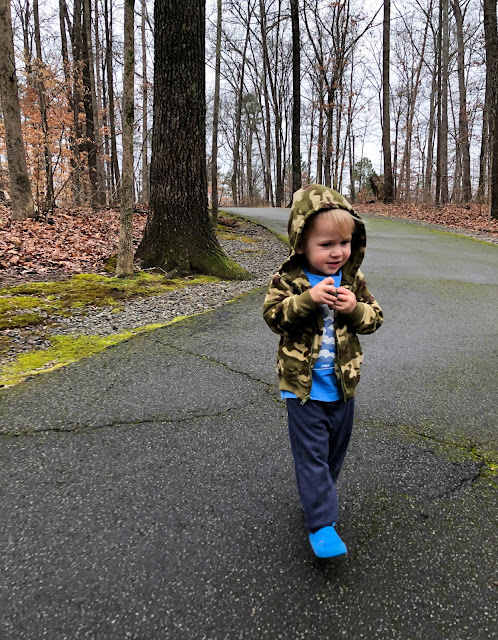 I loved how green the path was (I've always had a soft spot for moss): 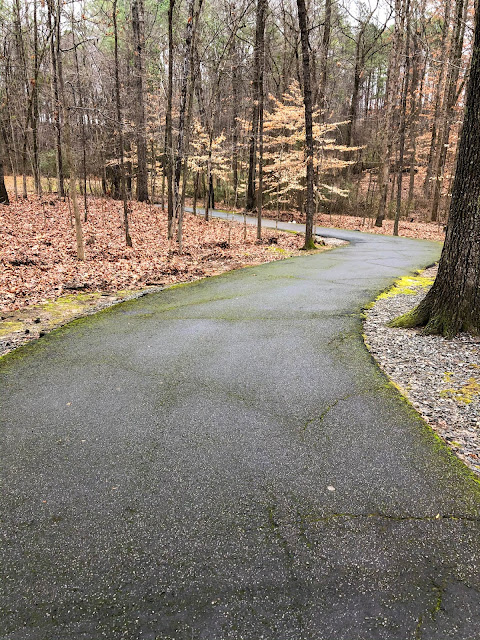 And here is a picture of a log succumbing to a legion of decomposers: fungi, moss, and lichen (to name a few of the visible decomposers we saw). 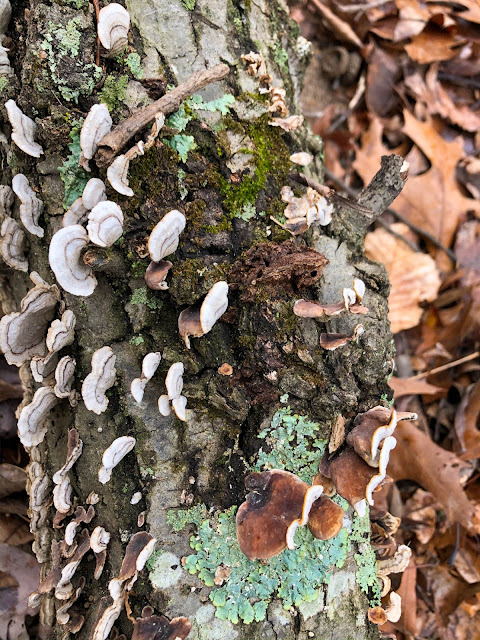 I didn't take many pictures of the kids at the playground (I took more videos (but, again, I'm feeling too strapped for time to bother uploading them right now)), but rest assured they had a wonderful time playing around. 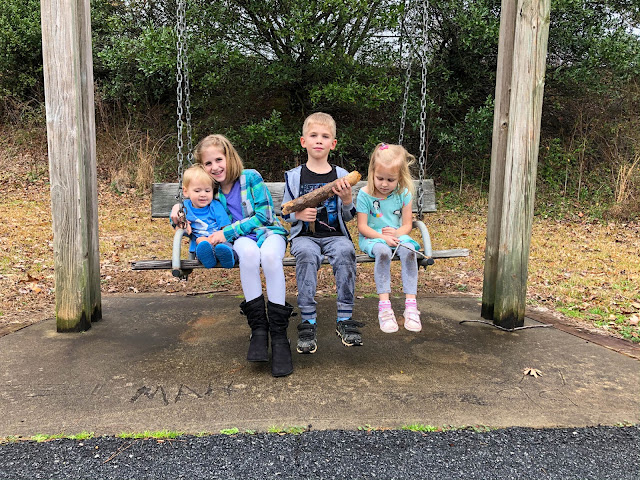 Yesterday, for example, we went to a spider-themed park (that we've also just discovered) within the same complex: 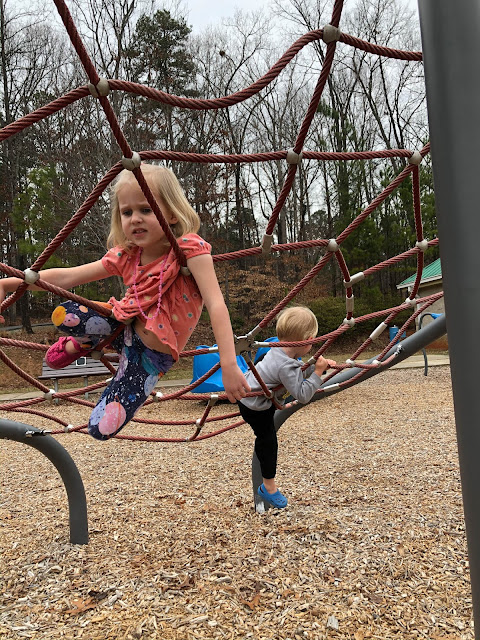 It has all sorts of little rope courses for the kids to climb on (the other playgrounds have different themes and different equipment so it keeps things fun): 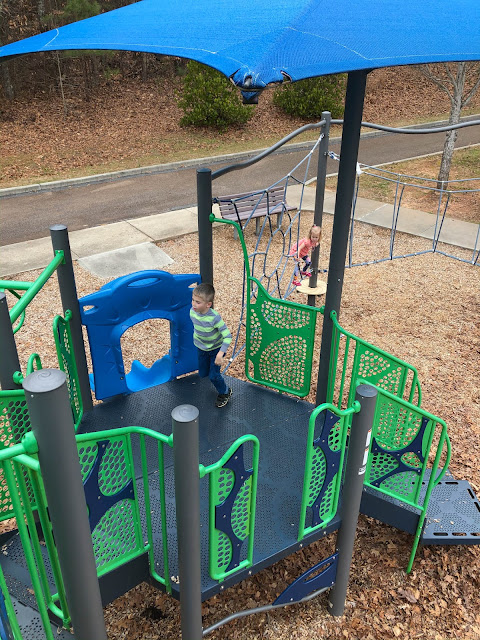 Including this one that is literally shaped like a spider: 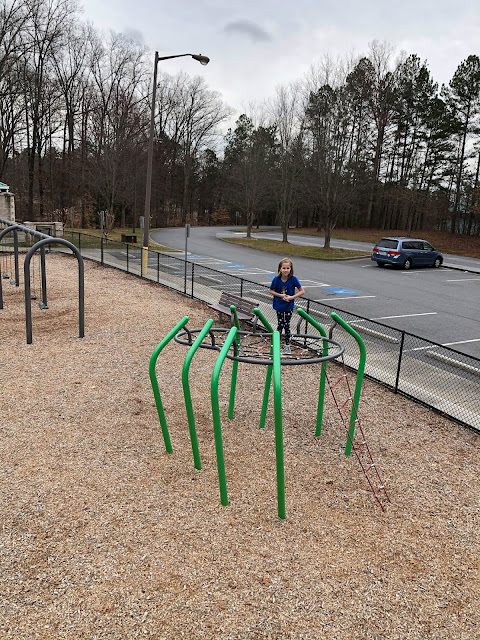 On the one hand, I think it's neat that there are so many playgrounds in one location. I'm sure it's wonderful when there are sports tournaments and the place is swarming with families. It's also convenient, I suppose, if you go to a park only to find that the pavilion there has been booked for a coorporate party or something and you feel awkward crashing—you can still go to a different park very nearby.

On the other hand, I'm a little baffled by it. I sort of wish we had a community park in our community—one that we could walk to. I wish they were sprinkled around the city a little more. I wish there was a park by the library and a park down the street and a park...you know...just...dotting the landscape.

Instead we have six parks all inside one mega park. And I can't decide how functional I really think that is. I suppose it's nice for us because the mega park is on our way to so many places that it's easy to stop by on our way home from things (orchestra, the orthodontist, shopping, whatever). But I do wish there was a really nice house within walking distance from our house (because of course I do).

Here's a series of pictures of Alexander with a little ladybug friend: 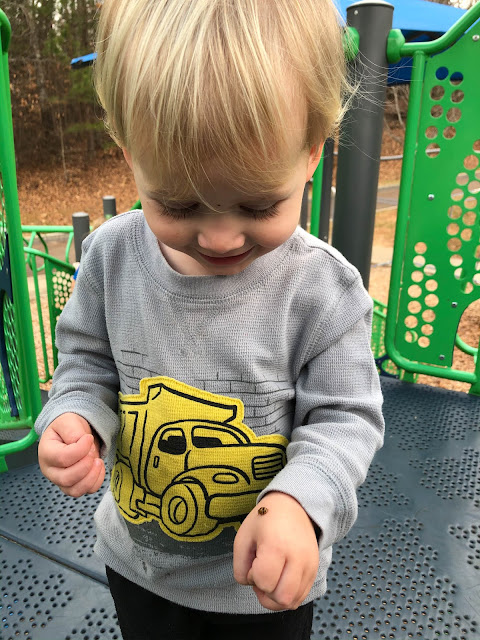 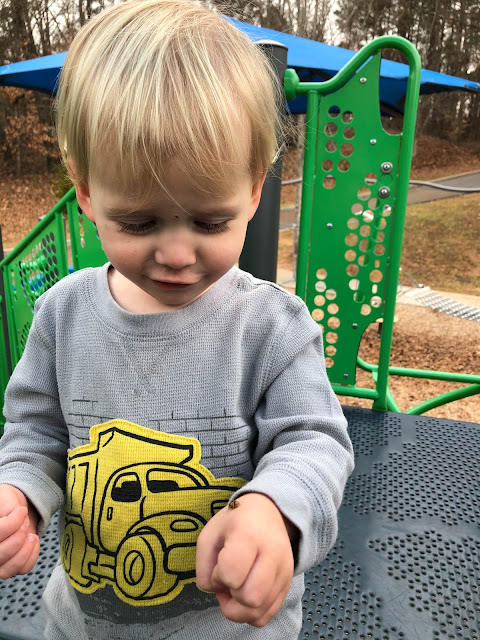 Today we weren't quite alone at the park because it was swarming with convicts. There were multiple "orange school buses," as Zoë and Alexander pointed out. Not the yellow-orange of a regular school bus but a real bright orange. I kind of ignored them (since they were parked at a different playground parking lot than where we were headed) but as we were leaving we saw a row of men in white jumpsuits (with bright yellow vests marked CONVICT) hauling old lumber and things towards a dumpster in the parking lot we were just crossing (being followed close behind by the bright orange school bus which we learned was actually a prison bus). It was pretty awkward, really. For...reasons.

While we were in the woods, Benjamin had filled his pockets with rocks. They were completely full and because they are boy pockets they about went down to his knees, so he was walking along—holding up his pants that were threatening to fall off at any moment—and with each step he took there was a lovely clattering sound.

"Listen to me walk!" Benjamin said.

And so I started singing a song (because I can sing about anything; very often I can think up a song including lyrics for whatever it is I'm thinking about but even if I can't (as I wasn't able to today) I can just make up lyrics on the spot).

"What song is that?" Miriam wondered.

"Oh, I just made it up. The real song is called Chain Gang and it goes like this..."

And I started singing the actual song as our wooded path spit us out into the parking lot.

It was about then that everything came into focus for me. Though our car had been the only car in the lot when we went into the woods, one of those big orange buses had joined it while we were strolling around. And there was a row of convicts in front of us, carrying out their community service duties, sporting their white jumpsuits and yellow CONVICT vests.

And there I was belting out Chain Gang.

We just smiled and nodded at the row of convicts as we walked to our van.

The encounter sure spurred a lot of questions from my little people so we talked about community service versus chain gangs and whether it's alright to expect convicts to work for low/no wages or whether that constitutes modern-day slavery or whether it simply fills a debt to society and what Aunt Sarah's job is in prison and how much she gets paid and...

Overall, I think I learned that I need to be a little more careful about what song I'm singing when I think we're all alone in the woods but other than that it was a fine outing.
Posted by Nancy at 12:15 AM