Milk and bread and eggs

We had French toast for dinner.

Somehow it seemed the fitting and proper thing to do, what with all the snow this morning. But it seems—and I could be wrong since we've only had a single snowfall and it fell on a Saturday so we didn't have to deal with the chaos of schools closings and inclement weather make-up days—that Georgians are able to keep their wits about them in the snow a little better than North Carolinians. I mean, no one really overtly freaked out about things.

Andrew went grocery shopping and there were still milk and bread and eggs to be found. I noticed that several of our neighbours left their houses—and we live in a pretty hilly area—to run their Saturday errands.

Life, for the most part, carried on as usual. But this time with snow!

There were only a couple of things that made me giggle. One was a message on our neighbour app that said: "It's a veritable blizzard! The accumulation has blown past the predictions of less than 1" for the area. And it's still coming down hard and thick!"

CRAY-ZAY that we blew right on past that "less than one inch" prediction! We got a full inch, at least! 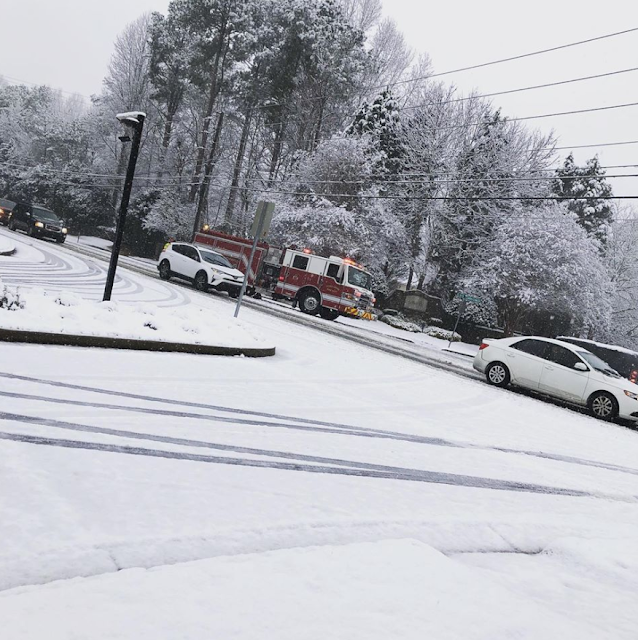 Now, I'm not saying it wasn't slick out there because snow and ice tend to be that way. I'm just saying...can you really be stuck in this amount of snow? And if you are, do you really need to call the fire department to get you unstuck? I mean, firemen were out in that big blizzard in Newfoundland last month digging people out of their homes and so forth. But, like...this is not remotely the same as that. Perhaps I'm misunderstanding what happened and the car went, like, into a ditch, but even then it seems like they'd need a tow-truck and not a firetruck.


Lastly, we did get an email from our ward executive secretary informing us that church services will take place as planned tomorrow morning—we will persevere!—you know, since the snow has melted off the roads by this point.

Mostly people seemed to be carrying on with their business or quietly deciding to stay at home. Our backdoor neighbour invited Benjamin over to play but stipulated that they'd have to play inside because it's far too cold to be outside today. Benjamin scoffed at that idea, bundled up, and headed outside to build himself a snowman. And then he had a snowball fight with his sisters. And then did who knows what else out there. Later another little friend came down to play—inside this time, since that's where our kids were and by that point in the day the snow was all old and melty.

So even though life felt rather normal and we weren't scrambling for eggs, bread, and milk, we still whipped up a batch of French toast for dinner. Benjamin sniffed the air and remarked, "Well, that smells well-maillarded, doesn't it?"

If you should ever dine at our house, you'd be happy to know that nothing ever gets burned here! We have taught our children about the maillard reaction (thanks to some wonderful cookbooks Andrew has been gleaning information from) and our children appreciate a golden-brown maillard-y dish (yes, we have taken that name and turned it into an adjective at our house). And while things might sometimes be a bit too over-maillarded they are never ever burnt.

Most of the French toast this evening was cooked to perfection with a lovely golden-brown maillard reaction. A few pieces may have been on the cusp of pyrolysis (but that's not burned, per se, it's merely an advanced stage of maillard-iness)...

Come to think of it, we should introduce our children to the word pyrolysis as well.

Here are a few more pictures of them feeling the exact opposite of pyrolysis...

Meet Elle, the snow-girl, which the kids made after Benjamin's original snowman fell apart, and which Zoë named: 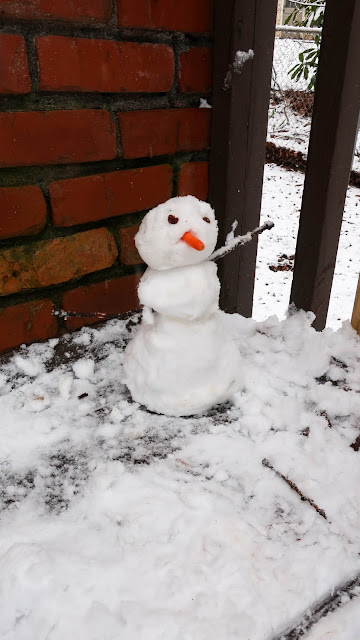 It was the best they could do, considering the circumstances (i.e. not very much snow): 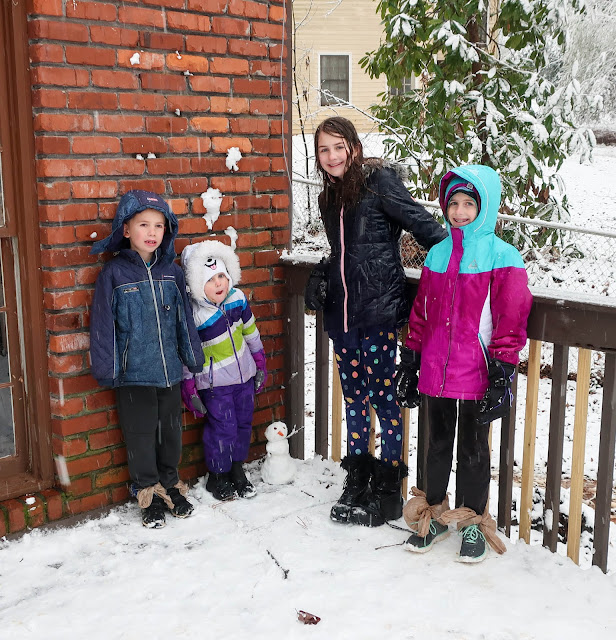 Here she is by their feet to show how tiny she is and to show how underprepared we are for winter (already): 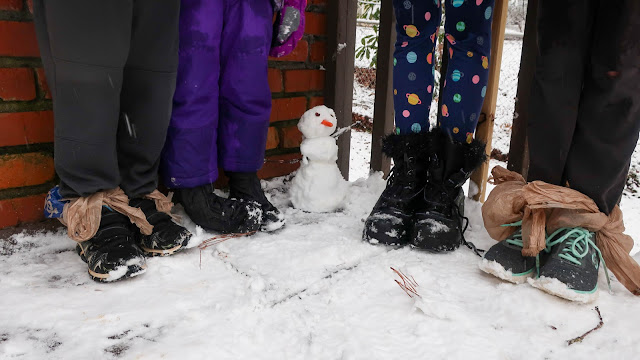 Benjamin's winter boots probably would have fit him again this year but I ditched them in Utah because he meticulous peeled off the entire outer waterproof part, rendering them pretty much useless. Miriam outgrew her winter boots and I didn't get her new ones. Both of those kids wore a couple pairs of socks and then wrapped their feet in grocery bags to keep warm (those things are very useful as waterproof liners). Benjamin's shoes are also on the wrong feet, I believe.

Zoë also outgrew her winter boots, but fortunately for her I had several pairs of boots for her in a box (a couple from her older sisters and one pair from Benjamin) that were just her size. Rachel was still able to wear her boots from last year (because I think we're fairly close to reaching the point where her growth is stagnating and her sizing is becoming a little more dependable). 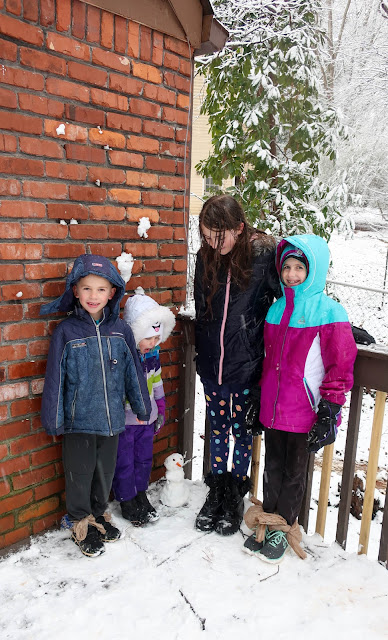 Rachel wanted a picture of the trees because they were pretty (I'm still getting that landscape/panoramic/elongated feel to my pictures; I really need to dive into the settings on this camera and fix that): 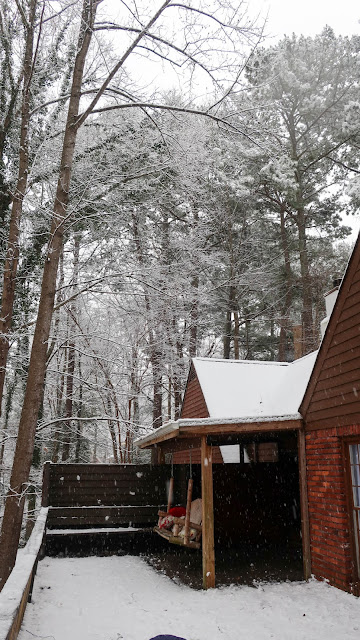 Here's this picture, for some reason: 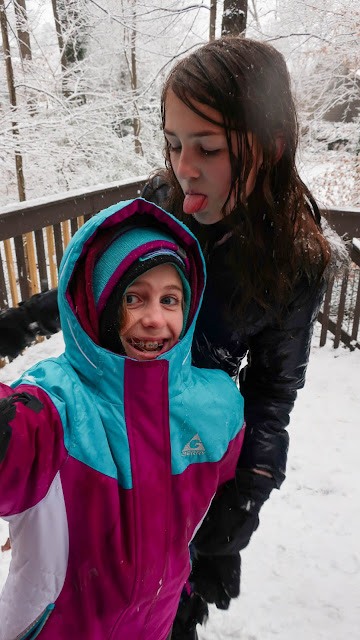 And here's Alexander hanging out with Elle after coming home from being Daddy's shopping buddy: 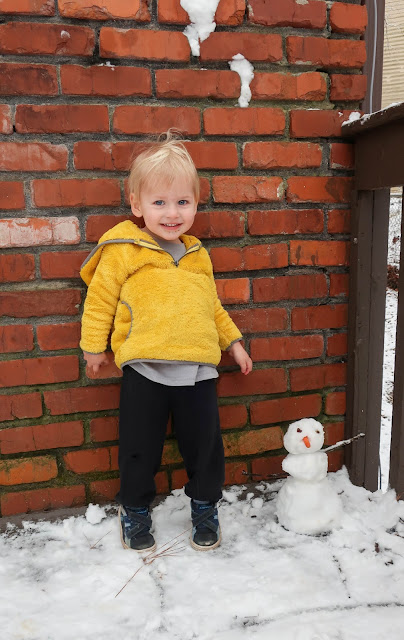 He was happy to meet her, but he didn't want to stay and play outside because he didn't like how the snow kept getting in his hair and his face ("It's yucky!"). I'm not sure why I didn't feel like jumping in and playing with the kids today. Perhaps because I haven't yet felt quite starved enough for snow to relish such a little skiff. I'm sure future me will be out playing in the snow with the kids.