The south can have some snow, as a treat

This morning was a hard morning for me and Alexander. Yesterday he didn't ask for milk a single time—he woke up wanting breakfast and didn't even think about nursing, he didn't seem to need a nap so I didn't give him one (which meant he didn't ask for milk then either), and he's been going to bed without milk for quite some time. And we were both happy and fine.

But this morning he woke up wanting milk.

"It's NOT all gone," Alexander said, his voice tinged with the mingling emotions of fear and hope.

"It's all gone," Daddy repeated.


"I'm not being mean. You're too old for nursing."

"Let's go get some breakfast."

Alexander and I were both on the brink of tears.

"Well..." he said before stopping with his mouth hanging wide open, gaping like a fish.

He adores Kate. And he considered this information for a minute before deciding that if Kate were to jump off a cliff he probably wouldn't follow.

"Well, I nurse! Momma give me milk! Daddy—go away! You're being mean!"

In the end Andrew carted him off (fussing and crying) for breakfast. Luckily mother nature had created a wonderful distraction for us all, for when they walked into the kitchen they discovered: It's snowing!

It was 70°F not too long ago and we're supposed to jump back up there again, soon, but we just had a big storm system sweep through (with tornadoes and that sort of thing) and it dragged a little cold front our way and...it's snowing!

Here are the kids on the back deck: 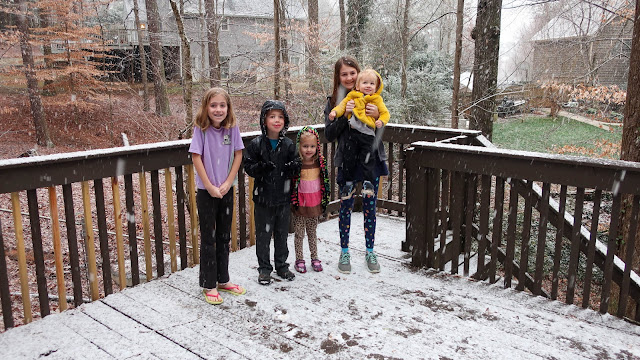 Alexander, who has since left to go shopping with Daddy, thought it was weird and wonderful: 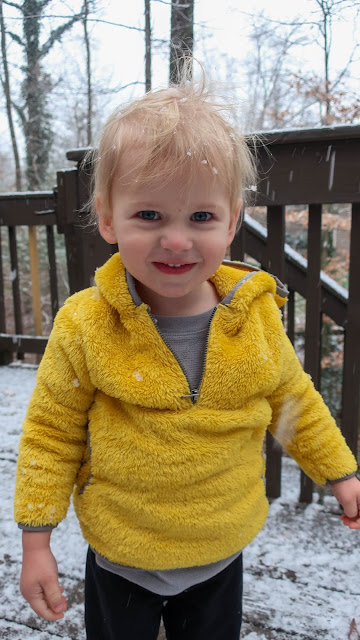 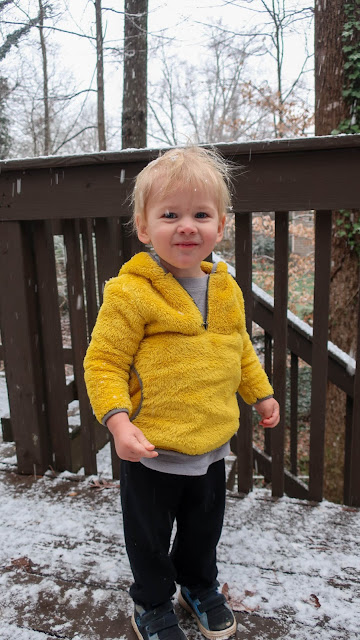 He and Zoë kept sneaking tastes of the white stuff: 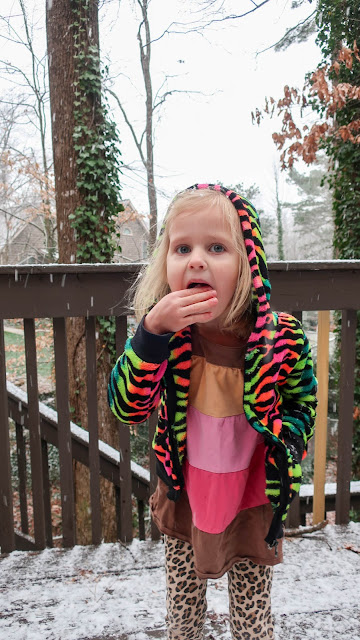 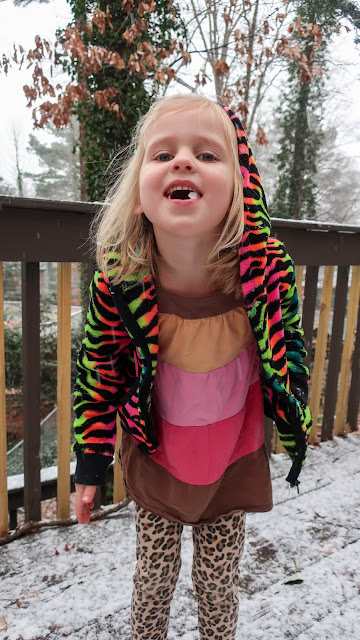 Benjamin would like enough snow to fall that we can go sledding (but I'm not sure that's going to happen because we're supposed to warm up quite a bit this afternoon): 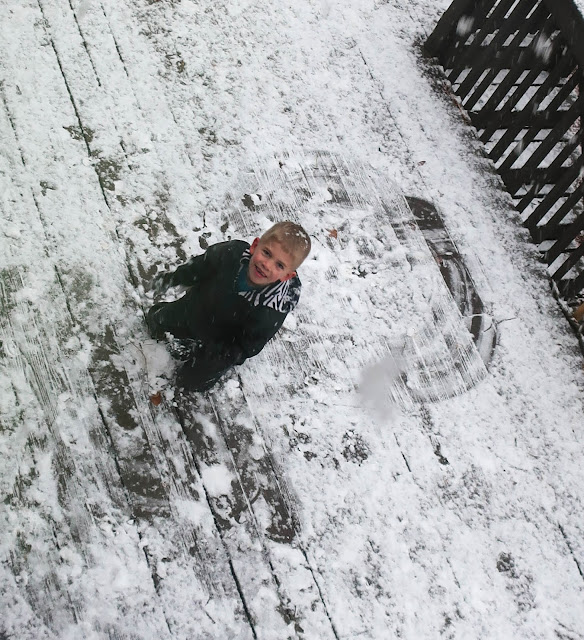 Benjamin built this cute little snowman (which I fear is the best we're able to manage since the snow isn't really sticking to the ground, other than on our deck): 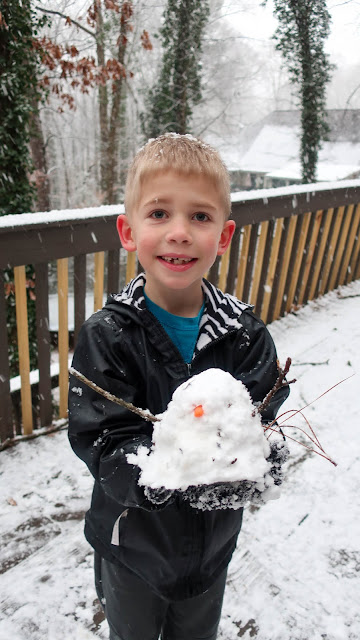 I don't know what setting my camera is on but it's doing these super elongated frames and I don't know enough about it to turn it off, so these are the pictures that we get. 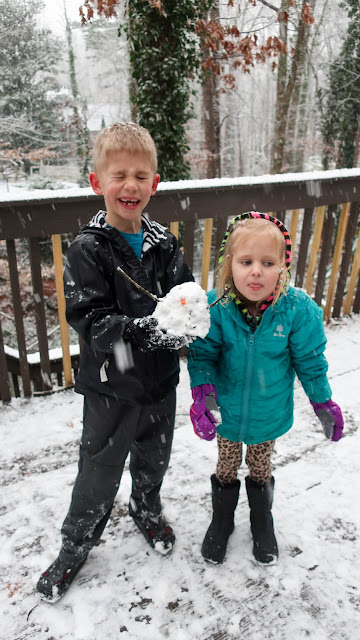 Zoë had been planning on going shopping with Andrew as well, but decided she'd better stay at home to play since this is likely the only time she'll see snow this year: 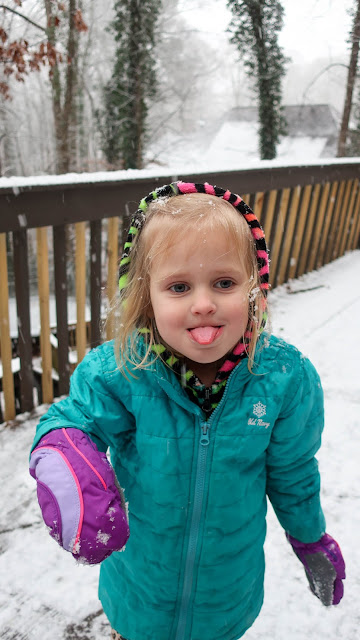 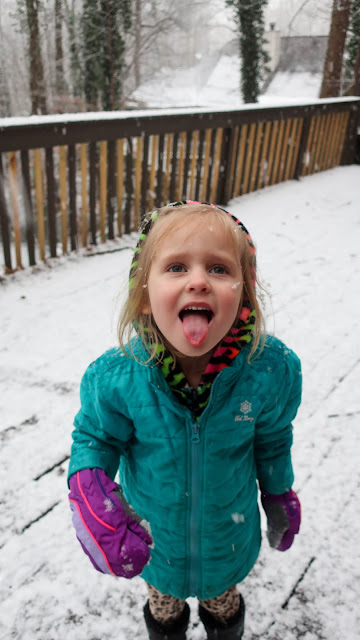 I'm hoping it will still be snowing when Alexander and Andrew are back from shopping because it was making me feel all sad and teary to think about Alexander missing a good romp in the snow as well. Just about anything can make me cry these days. I remember thinking grown ups cried altogether too often when I was little (though my siblings seem to remember that I cried altogether too often as a child, so...) but now I kind of get it. Being a grown up is all sorts of melancholy nostalgia. There's happiness, too, but mostly it's just realizing that time moves far too quickly and you can never get moments back so you have to soak every minute up. 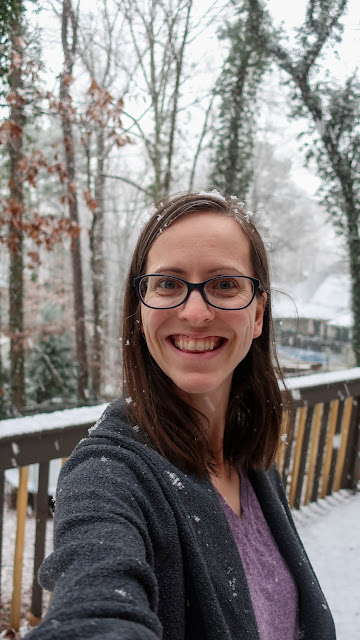 And that's why the four big kids are all out frolicking in the snow and I'm inside about to work on that paper (because my nostalgia tells me that snow is a terrible invention, though I have to admit that having snow be an anomaly makes it ever so much more attractive so perhaps I'll put this paper aside for a little while longer).
Posted by Nancy at 10:20 AM