In a fit of something that feels close to insanity, we put up the Christmas tree and let the kitty out of her convalescence isolation chamber. She got "fixed" on Monday, as you may recall, and we were told to keep her in one room, preferably a quiet room, away from other pets or particularly obnoxious (read: small) humans. We tried keeping her in the laundry room, but she was going crazy being holed up in there so we set her up in the basement, wedging one of the girls' mattresses in their doorless doorway so that she wouldn't go climb on their bunkbed or anything crazy like that.
But then we caught her sitting on the top of the mattress (in the little space between the mattress and the doorframe) and decided that it's not really possible to keep a cat from climbing. Especially our cat, who will climb the window mutins. It's equally impossible to keep a cone on a cat (I think Waffelles wore her cone for approximately 20 seconds before ripping it off).
Mostly we just left her in the basement to rest, hoping she wouldn't climb too many things, and she seems to be healing just fine. She spent a couple of days being tender with herself downstairs and spent most of her time sleeping, but after that she spent most of her time meowing because she was lonely. She was fine whenever anyone was down there hanging out with her but if we ever dared close her down there alone she'd be all howls and yowls.
She likes to be in the room where it's happen[ing], so yesterday when we dragged out all of our Christmas stuff, we gave up trying to keep Waffelles in the basement anymore. She's been enjoying having full run of the house again (and her surgery site is looking pretty great, I think). As worried as we were about the combination of kitty + tree, she's really been quite good about it. Hopefully that sticks. 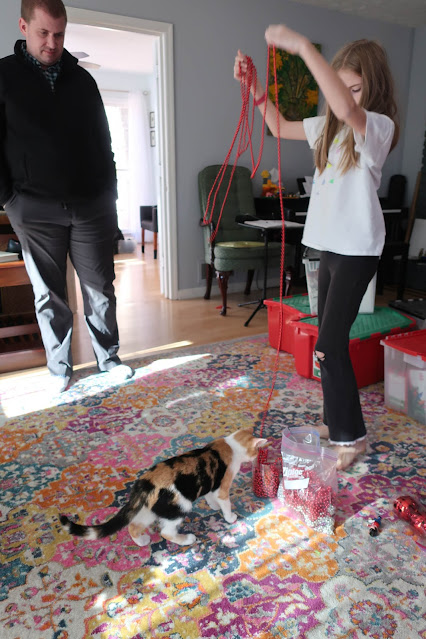 Anyway, here we are setting up the tree, which is a rather simple affair. It's prelit so all we had to do was string some beads around it and hang up some ornaments. We opted not to put out our wedding snowmen this year (because that seems to be just the sort of thing that Waffelles would absolutely destroy). We also left off all our pretty blown-glass ornaments from Egypt, which...have yet to ever see the light of day. One day we'll use them. 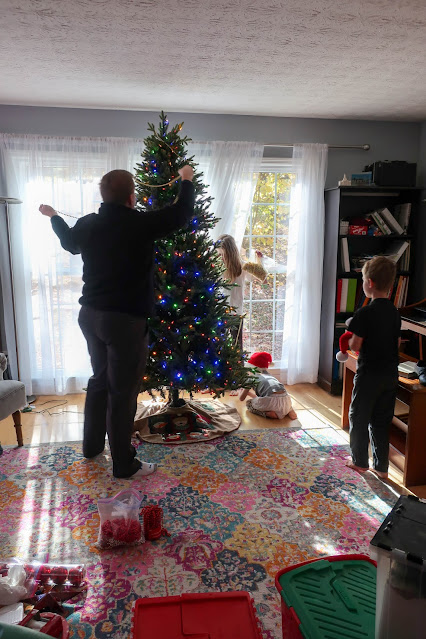 Alexander was Rachel's buddy while Daddy and Miriam put the beads on the tree. 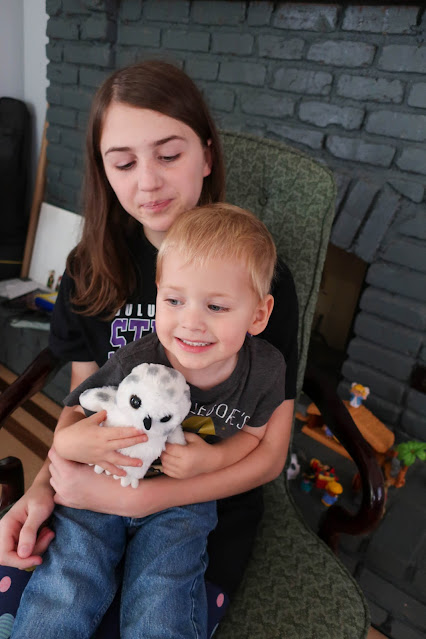 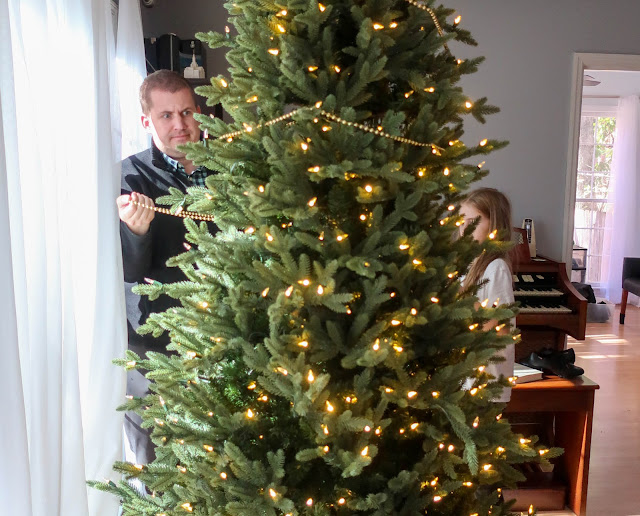 Here's Benjamin showing me how he transformed his thumb into a Roman soldier: 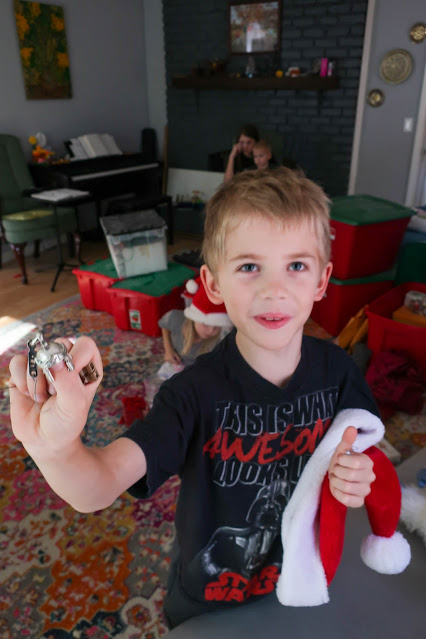 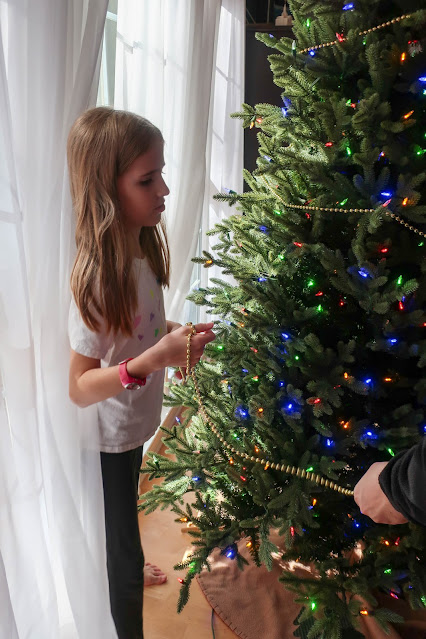 The kids were excited to find the Santa hats in our boxes—here's Zoë and Benjamin wearing them: 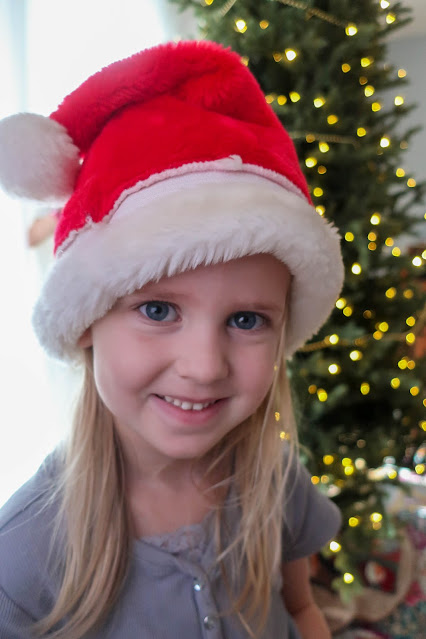 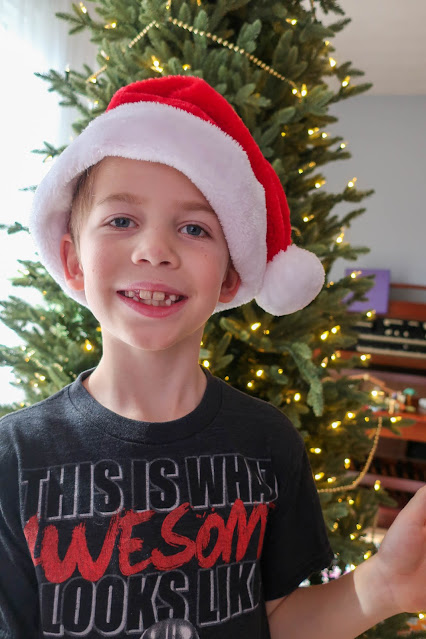 And here are Rachel and Alexander reaching to put an ornament on the tree: 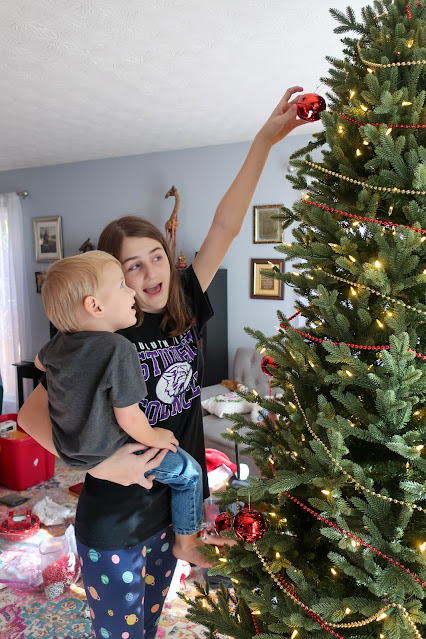 The tree was soon swarming with excited children, remembering this and that as they grabbed at ornaments and found barren branches to adorn: 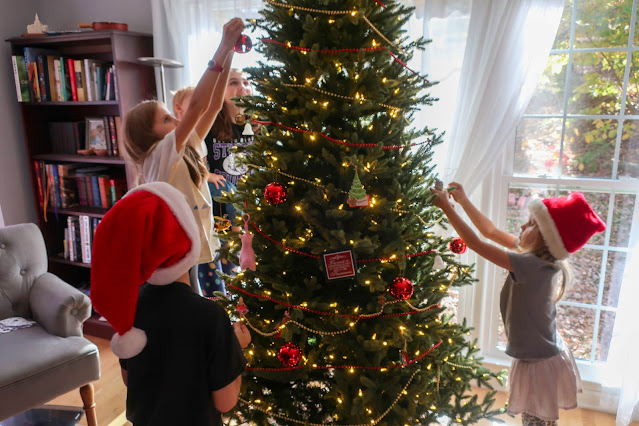 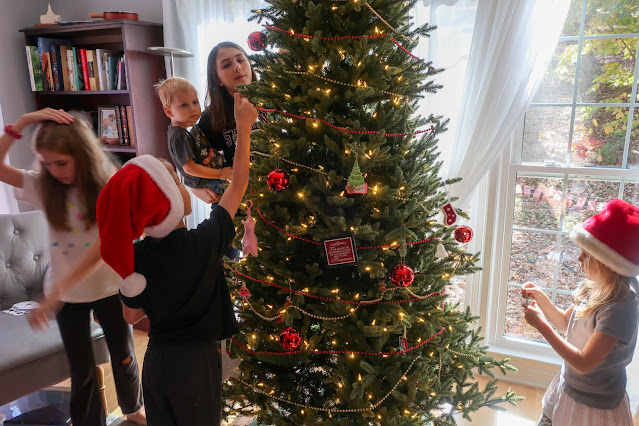 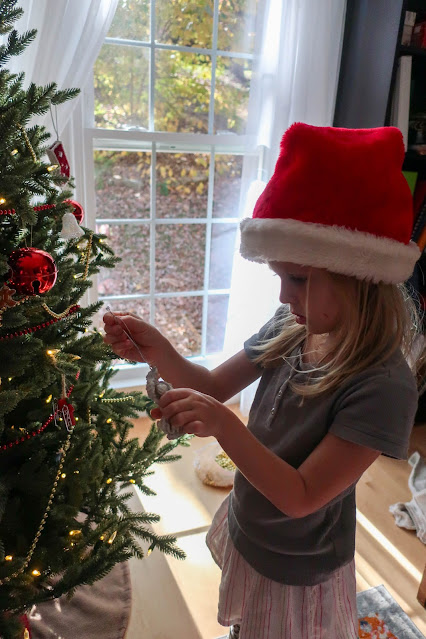 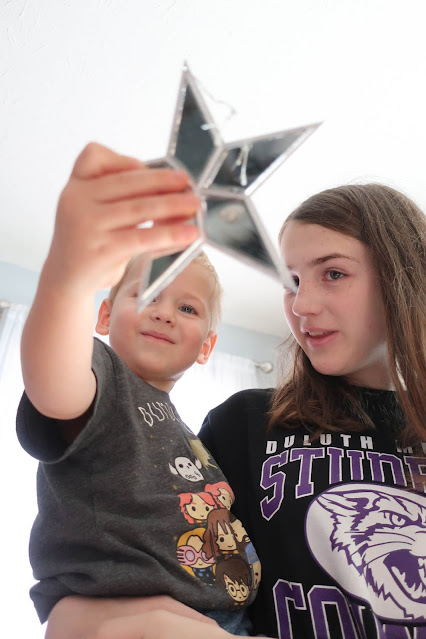 Benjamin always likes to find one of the ornaments with Daddy's picture to compare how much they resemble each other at any given age: 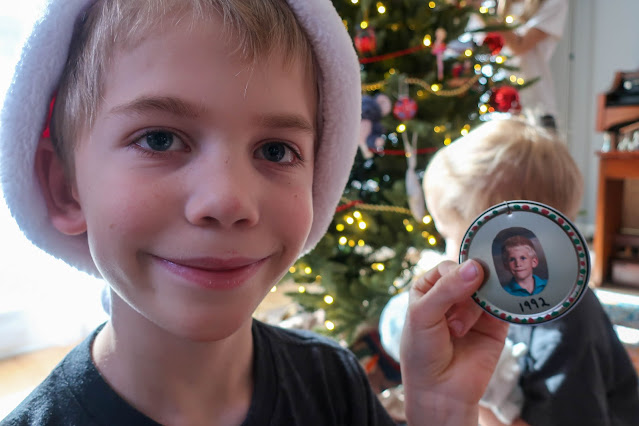 Alexander sure was excited about this ornament: 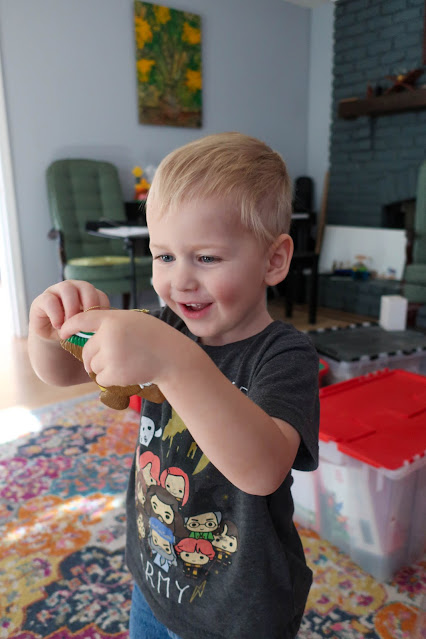 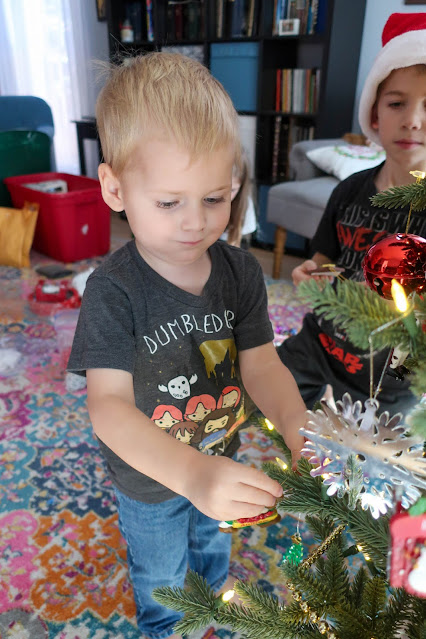 And he sure is proud of the good job he did hanging it on the tree! 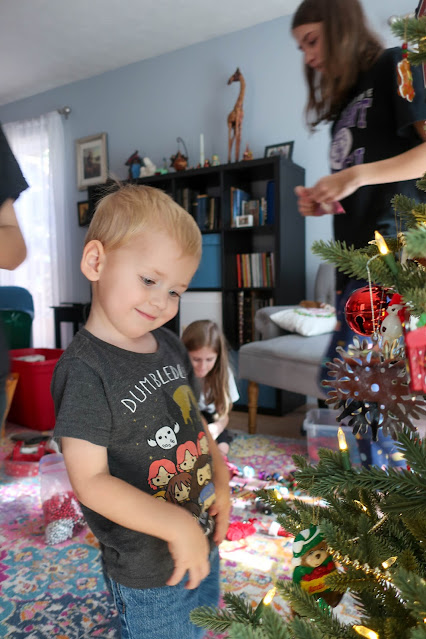 It's moments like this that my heart absolutely breaks over leaving the baby years behind. Christmas is so magical to children. Alexander is just at the age where he has snippets of memories and knowledge of Christmas stirring in his brain, but so much is just brand new all over again. And it's so exciting. And I love watching him discover it all.
If it were logical or feasible to just keep having babies forever, I probably would. But, alas...I have the ones I have and they're all relentlessly growing up.
For example, who does Rachel even she even think she is—a teenager? 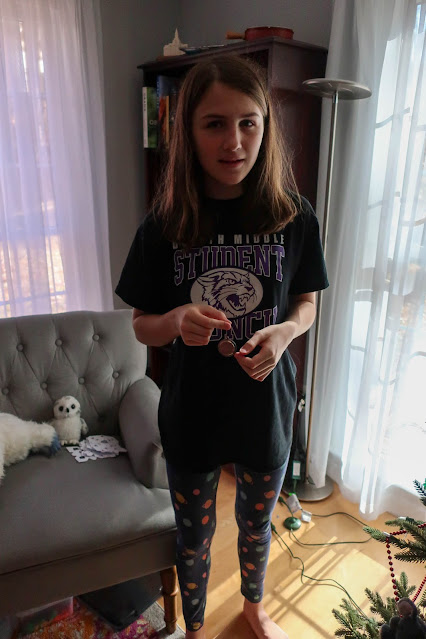 Somehow there's a teenager standing in my music room doing her best to help keep the Christmas magic alive now that she knows all the trade secrets. And I love her for it, but...remember little Rachel? So sweet, so excited, so little!
Benjamin was surprised to find this scorpion ornament. It's one Grandma picked up on one of her many adventures. I was surprised to find, when I turned off the Christmas tree lights for the first time, that it glows in the dark! So that's pretty neat! 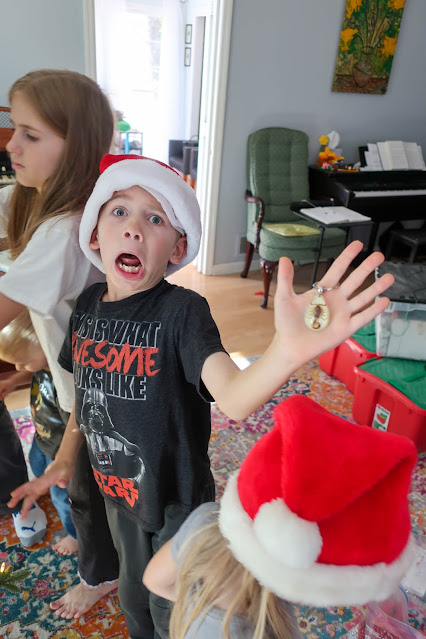 The children carefully contemplated each ornament before putting it on the tree, wondering aloud who made it, where it came from, and whether it was particularly breakable (fragile items, as I mentioned, were reserved for future years when we don't have a kitten running around...because she, like my children, insists on growing older and will soon be a less-frisky cat). 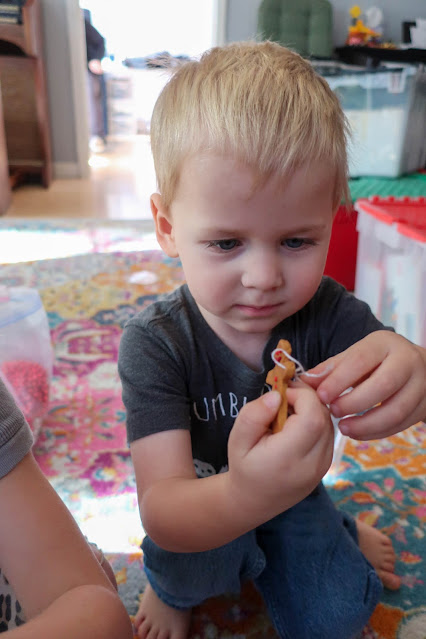 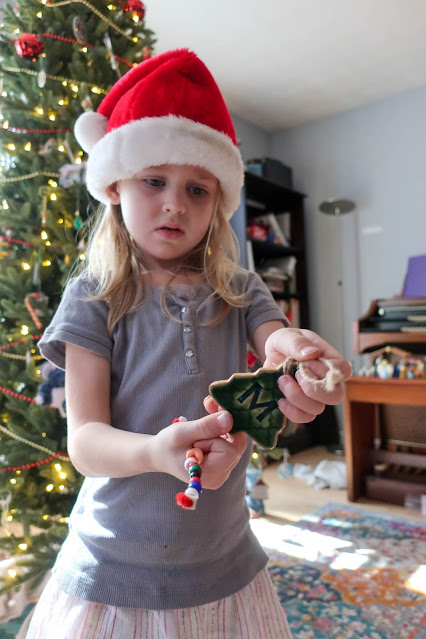 When the tree was trimmed, the children settled in for a round of "The Santa Claus Game," which my sister Kelli sent us prior to Christmas last year. Alexander and Zoë love it (the older kids humour them exceptionally well). 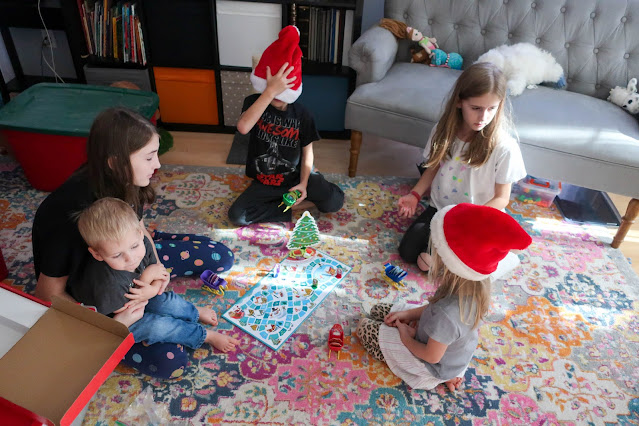 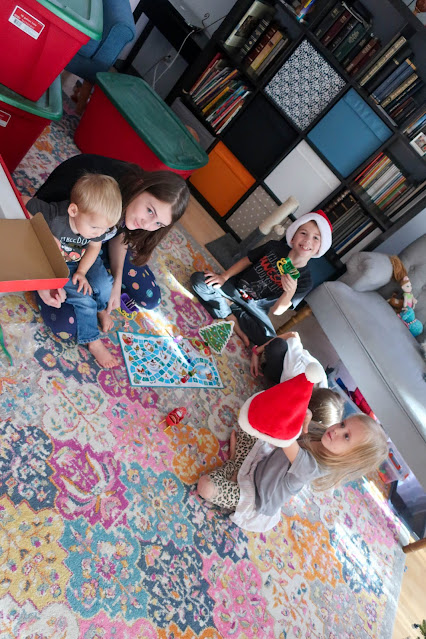 Waffelles has really been pretty good about leaving the tree alone. She enjoys napping under the tree and watching the lights. She's batted a few ornaments a few times, but stops when we tell her to stop. 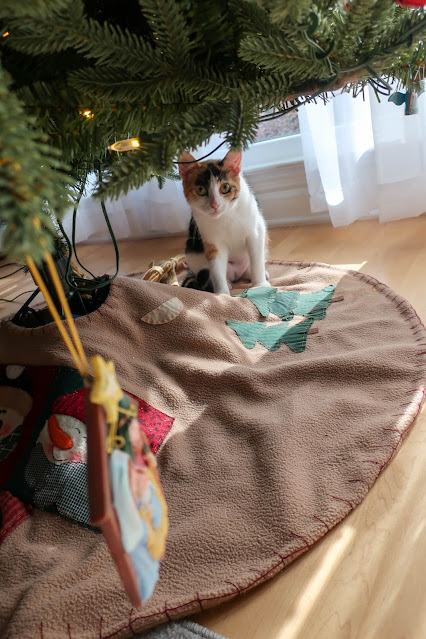 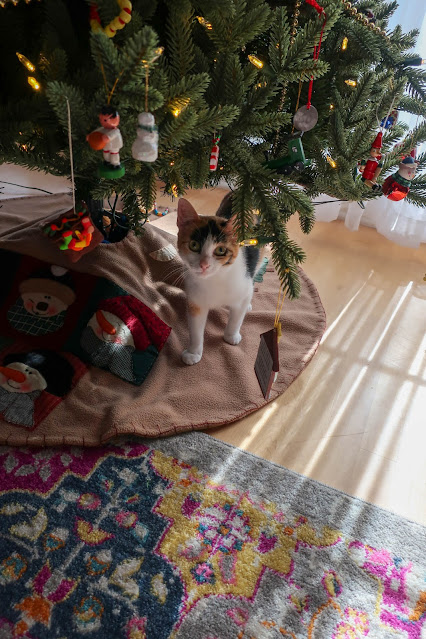 The top of the bookcase where I set up our Bethlehem village and other nativity sets, on the other hand, has become her obsession. She has never jumped on top of that bookcase before (with the dust as my witness—there were no paw prints up there on the undusted bookcase when I dusted to set out the nativities) but now she's constantly hopping up there and knocking stuff over!

I'm sure her curiosity will diminish in the next few days, while the children's excitement is ramping up!
Posted by Nancy at 10:27 PM