I volunteered to do a writing project this summer while I was between terms and it's been a little...agonizing. I don't think I will ever love the paper (or...even...like...the paper) but I think we've almost pulled it together, so that's something. I really should be working on it now because we have two weeks left to finish it, but I'm going to take a little bit of time to do some writing that's...not that.

Somehow we ended up with bread and apples coming out our ears. Andrew does all the grocery shopping at our house, which is wonderful, but sometimes he has a lot going on and gets a little distracted and just...buys things. And then he gets home and I'm like, "Dude! We have a case of apples right here! What are we going to do with that case of apples?!"

Like, I know we have a lot of mouths to feed but there's only so many doctors we need to keep away!

Side note: Alexander has been sick today.

I don't know what he's sick with, but he woke up around 7:00 this morning with a fever. I don't think he woke up because of the fever (simply because I think he woke up due to the jack-hammering that someone thought was a good idea to begin at 7:00 in the morning), but he was up and he was obviously sick. But he said he felt fine, aside from his legs hurting (probably fever aches).

He hasn't been in contact with anyone (because we're still isolating fairly effectively over here) and no one else is sick...so we're not sure what to think. He just had a chill day, largely in front of Daniel Tiger; his siblings happily doted on him. They loaned him a favourite fuzzy blanket, brought him water and stuffed animals, warmed a heat pack for his cold feet and helped him into his favourite sweater when he got the chills, and they cuddled him and fawned over him and took his temperature a million times. 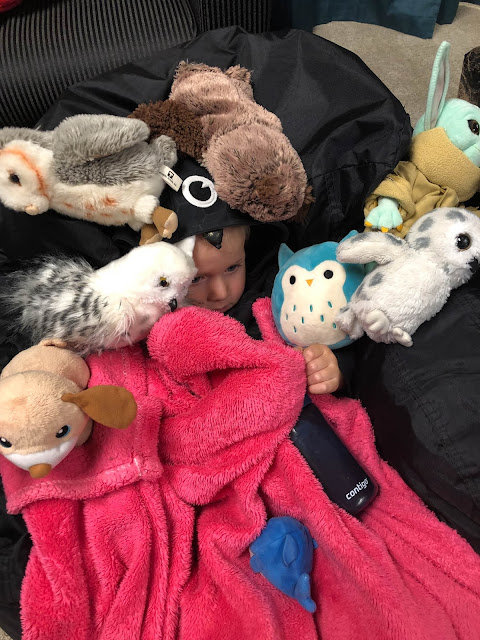 It helps that we got a wand thermometer thingy for the pandemic...the kind you just aim at their forehead (the kind that they've been using before you enter pretty much any public (or private) building). The kids thought it was super fun to use (it was super fun to use) so everybody had their temperature checked a million times today.

Alexander was so funny. We've been watching the documentary series Human: The World Within as part of our science curriculum and Alexander has been loving it. He loves to quote lines from the show like, "Your body is a machine that never stops working!"

He has also learned a lot from Daniel Tiger and must have watched an episode about allergies today because he said, "I don't know why I'm sick because I don't have any foods that I'm allergic to!"

(Only you have to say allergic like "aller-zzzzzzzzzzzhick" because that's how he does it).

Lucky for him the episode of Human: The World Within today was called Defend and was about how your body fights off microscopic invaders. So he realized that he'd been infected by some kind of germ and has been blabbing about red blood cells and white blood cells (and how white blood cells fight the germs he has and how we poop out "red dead cells" (he doesn't understand the rules English has about adjective order quite yet)). He can tell you all sorts of things about your immune system now!

(Also, you have to flap your tongue every time you say "bllllood" because that's how he does it).

He was a pretty entertaining sick person, but I hope his illness is short-lived and that no one else gets it. I don't even know if we should get him tested because he literally never goes anywhere. Except...we were at the hotel for a few days and his sisters leave the house for things (babysitting, piano lessons, organ lessons) (but none of their contacts has been ill...)

Anyway, we'll just keep monitoring him for a bit. Our next door neighbour was sick, but we hadn't played with her (outside, distanced) in a few weeks. And when her mom (who took her to the ER) asked for a COVID test, she was told that they didn't think she needed one, that it was just a "random virus" and to go home to wait it out. Seems like a weird flex during a pandemic, but okay.

Her daughter was back outside playing today and had gone to school and everything so I think she's healthy again.

Anyway...back to the apples, which Alexander apparently didn't eat enough of to avoid potentially calling the doctor. Even though he could have because we had apples coming out of our ears!

So I made applesauce during the day on Saturday and Rachel made French toast for dinner that evening (to use up a loaf of bread, which was also coming out of our ears). We sat down for dinner and Benjamin was very excited to have breakfast-for-dinner.

"Too bad we're not having pancakes!" he said. "Because then I could say how much I love slam-johns and sowbelly!"

Everyone turned to stare at him. You have to know, first of all, that Benjamin tends to be a bit of a mumbler at times, talking very quickly without enunciating. So we couldn't quite tell what he had said.

"Are you...having a stroke?" Rachel asked.

Because she's a teenager and gets sassy like that.

We all stared at him a little more, like, "Whaaaaaat?"

"Slam-johns and sowbelly!" he repeated. "It means pancakes and bacon!"

"Nope," he said confidently. "Slam-johns and sowbelly! I read it in a book! It's what pioneers called pancakes and bacon on the Oregon Trail!"

He picks up a lot of things from books. For a time he would say, "Hot Jupiter!" whenever he was excited about something. He learned that from a book, too. But surely he was simply misremembering that nickname for pancakes because none of us had ever heard it before. We challenged him on it.

A quick internet search yielded no results for slam-johns, but we did find that slapjacks is sometimes used instead of flapjacks. Perhaps he had read slapjacks.

That line gave us a chuckle because of this skit from Fawlty Towers:

None of us could actually believe that pancakes were ever called slam-johns, however, so we spent the rest of the meal laughing about it and making up other names for pancakes, using the formula [violent verb (ideally with an initial s-)]+[monosyllabic (typically male) name].

There were a few "stabs" and "slices" in there, as well (slice-mike!) but that honestly feels like it's getting a little too violent, don't you think?

Benjamin laughed along with us (because he's an excellent sport) but kept insisting that he truly had read it in a book about the Oregon Trail. So after dinner I hopped online to do a more thorough search on his behalf. When I searched for "slam-johns and sowbelly" I got a ton of hits. Or at least several.

But then there's this:

The California Trail: A social studies resource unit for fifth grades, a master's thesis submitted by Norman Lee Tvedte to the University of Southern California in 1953 (page 72).

Apparently in-text citations weren't a requirement in 1953, so I have no idea where Tvedte got their information regarding sow-belly and slam-johns (and I don't really want to read/watch/listen to everything they listed in their bibliography). But, there it is, in black and white, from 1953. So perhaps that's where Diane Stanley got her information (I guess I could pull out the book to see if she included a bibliography, but I really should get to the actual writing I need to do).

Though "flapjack" appears in the Online Etymological Dictionary, there is no entry for "slam-john," so I think that's about as much information as I'll be able to uncover about the origins of this term for now.

At any rate, Benjamin was happy to be vindicated and he's hoping we'll have some slam-johns for dinner soon!