Rachel was in a sour mood this morning. Mommy just couldn't do anything right. She didn't want to be held, but she didn't want me to put her down. She wanted me to read stories, but she kept closing the books before I was finished reading them. She wanted to go outside, but it was raining. She wanted to eat, but she wouldn't. She acted tired, but wouldn't go to sleep.

We even had some friends over and she kept on fussing the entire time we they were over. Usually she loves company, so that was quite strange.

I was almost thinking she had completely forgotten how to smile because all she did was yell and scream at me all morning. This was the closest thing I got to a happy face: 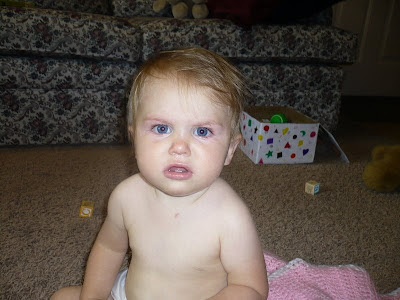 What are you looking at?
Charming, no? I was going crazy. It was like she'd packed her angry eyes and nothing else.

She finally went down for a nap shortly after 1:00. I was exhausted from having dealt with her temper tantrums all morning, so I, too, took a little nap. When I woke up, I decided that I needed a cookie.

The problem was we don't have any cookies in our house.

The problem was that my arm is still incredibly sore from playing racquetball last night and I wasn't sure I'd be able to stir the dough.

So I hunted around for a recipe that suggested using a hand mixer.

I had almost finished making the dough when Rachel woke up from her nap. She seemed pretty happy for a while, and I was able to finish the dough and get some cookies in the oven before she got too fussy again.

Then I fed her lunch. She was still a little grumpy, but when she saw me getting cookies out of the oven and immediately perked up.

"You have to finish lunch first," I said.

And so she finished up her mushy peas as fast as she could. I brought a cookie in from the kitchen.

I held the cookie out to her, without letting go. She tried to yank it from my hands.

"Just a bite," I reminded her, "You can't have the whole thing!"

She opened her mouth grudgingly. I stuck the cookie inside and she bit down.

Before I could take the cookie away she had grabbed it with both hands and somehow managed to smash it so perfectly into each of her little fists that she hardly dropped a crumb.

And boy was she proud of herself! 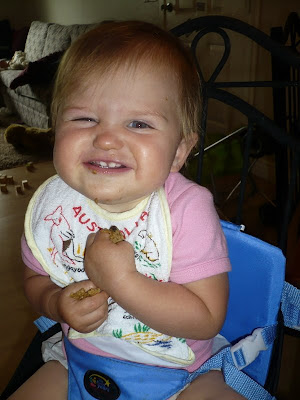 Needless to say, I ended up letting Rachel keep that cookie and got a different one for myself, leaving her with the dilemma of getting the cookie from her fist to her mouth. 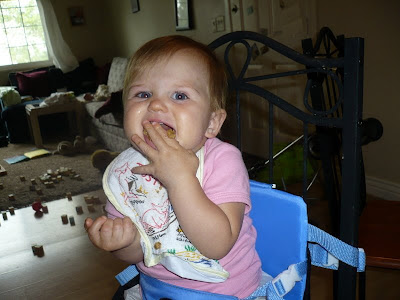 I never knew my baby was such a little cookie monster, but I was happy to get to trade in ol' grumpy eyes for a while. 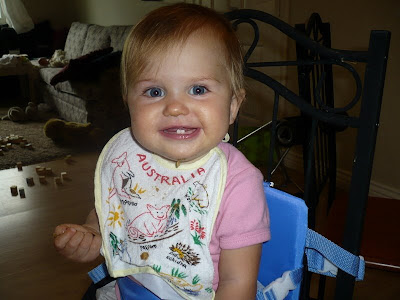 Those smiles were nice while they lasted, but now the frowns are back and I'm sorely tempted to give her another cookie even though she doesn't deserve one. The rain has let up a bit, though, so I think we're going to try to play outside. We'll see how long that lasts...
Posted by Nancy at 5:26 PM