Rachel woke up this morning at her usual hour--the crack of dawn--and Andrew brought her in to me so that we could nurse in bed, as per our usual. Normally when Rachel is done eating she starts goofing around, trying to start pillow fights and jump on Daddy. Today, however, she actually fell back asleep. I can't even remember the last time she's done that!

I made Andrew get out of bed and turn off the alarm so that we wouldn't wake her up. She and I slept while Daddy got ready for work. Actually, she slept and I dozed, being too worried about her falling off the bed to fall soundly asleep. I needn't have worried.

Rachel sleeps like I do. That means that she has methods of taking up the entire bed.

She started down in my arms. After a little while she lifted herself up on all fours and heaved herself onto my pillow, landing face first. She stayed like that for a few minutes and then turned on her side and pushed my head off the pillow. I slept on Andrew's side of the bed for a few minutes longer before finally deciding to get up. 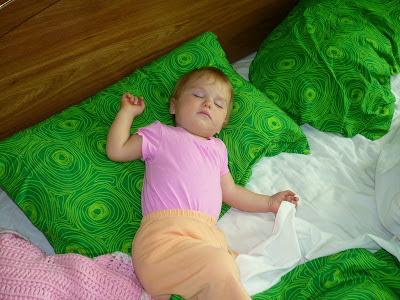 Every time I checked on her, she was in a different position. 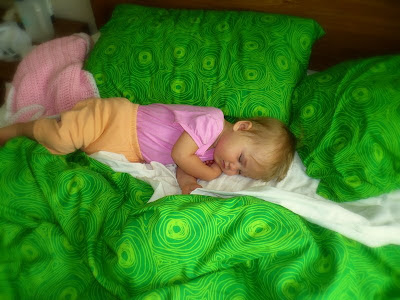 When she woke up, she was effectively taking up more than half the bed. Quite the feat for such a little thing. 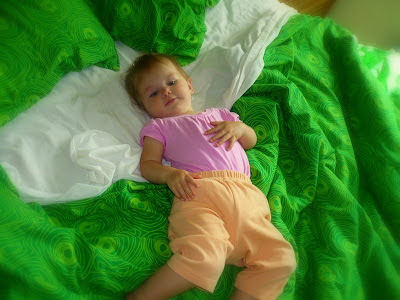 I'm awake, I'm awake...
That's pretty much the reason why she doesn't sleep in our bed anymore.

So besides being kicked out of my bed, today was awesome.

We went swimming with Bonnie and Amy. Rachel liked having a little friend to play with and Bonnie and I enjoyed having another adult to converse with. Both little babies were very brave today, splashing and kicking their legs. Rachel never seems to be able to get enough bubble blowing in. For some reason she just likes putting her face in the water.

When we had been there for about 40 minutes, Rachel climbed out and refused to get back in. She started walking towards the towels. Amy was cold, too, so Bonnie and I decided it was time to go.

Rachel realized that swimming is supposed to make you tired and she fell asleep on the walk home. Of course, that may have been because it was around 3:00 and she hadn't had a nap yet. Of course, that was only because she had slept in so late today. Whatever the reason, the nap was wonderful.

I was able to fold the laundry, do some dishes, and do a very little writing.

Andrew came home on time, as promised, and we began to get ready to play racquetball with Jacob and Grandpa.

Finally, after she'd been diaperless for over 2 hours, and had been holding her pee for goodness knows how long, she walked into the bathroom, where Andrew and I both happened to be. She looked up at us.

"Do you have to go potty?" I asked, coming towards her to help her sit down. She can get on the potty all by herself, but she finds it a little bit tricky.

As soon as I asked her, however, she immediately went all over the floor. You could see the relief on her face. Silly girl! I'm just proud of her for knowing where to go. If Daddy hadn't have been blocking her path to the potty she probably would have made it!

Just as she was peeing all over the floor, Grandma knocked on the door. She was coming over to babysit while we played racquetball.

I quickly mopped up and sterilized the floor and then we ran out and hopped in the van.

First I had a lesson with Reid. He goes really easy on me, but I think I'm getting better. When I played against Andrew I got 5 points and I think I made him work a little bit harder than last time. He got whipped by his dad, though.

When they came out of the court they were both sweating, panting, and bright red.

"I'm going to be so sore!" Andrew moaned on our way out to the car.

"I'm not!" I said. Having just gotten over being sore from the last time we played, I know that's a daring statement to make, but I'm pretty sure I won't be sore. I mean, I can still move my hand and everything!
Posted by Nancy at 10:09 PM