We had a little High River reunion on Friday the Thirteenth. It was actually a botched reunion since a few pivotal invitees decided not to come. However few attendees there were, we had a lot of fun!

I tried to spend all day getting ready for the party, but Rachel was in one of her "I need Mommy" moods and wouldn't let me out of her sight. She's getting to be a pretty big girl now and it is increasingly difficult to strap her on and work with her, whether she's on my back, my hip, or my stomach. She's over a fifth of my body weight and she still likes to be strapped on my stomach, facing in, so it's kind of like being 21 months pregnant. I was awkward enough at 10 months pregnant, you don't want to see how awkward I am at 21 months pregnant.

Finally, I had had enough. I decided to turn on the TV for Rachel. She never gets to watch TV since we don't get any TV channels and Andrew and I usually only watch DVDs after she goes to bed--on the rare occasion that we watch them.

Rachel was absolutely transfixed. She kept pointing out the noses on every character and giving kisses and dancing. It was so cute that I hardly got any work done in the whole ten minutes she was watching the movie. 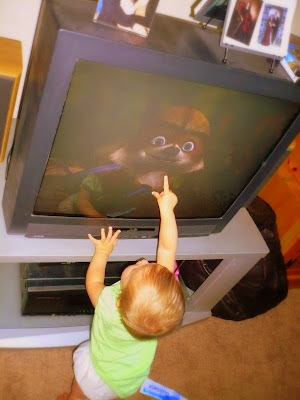 It was a nice break, no matter how short it was. And I ended up being able to get the house nearly as clean as I wanted it by the time our guests arrived, Rachel encumbered and all!

The kids that I grew up with in High River are a good bunch. Most of us turned out fairly normal and are leading lives consistent with the gospel. I love when I hear that people are doing well. I can't even imagine how hard life is for the kids Patrick's age. So many of them seem to be struggling.

Anyway, Courtney moved back down to Utah for the summer to attend the Y as a visiting student, so we got our friends from High River together to get reacquainted. Unfortunately, only Courtney came.

We had to phone Amy to remind her to come. She's due in November with her first child and is experiencing a bit of pregnancy brain... Everyone else ended up with alternative arrangements.

Before Amy came over we played Quelf. That always brings out the best in people.

Josie landed on Andrew's square, so she bleepin' had to say bleep as well, no matter what happened, otherwise she'd have to pay the bleepin' penalty.

We all jumped up and yelled, "Pizza Party!" and then Josie answered her phone, "Bleepity hi, Liz!"

Liz said something else.

"I have a bleepin' curse! So I have to say bleepity bleep bleepin' things, otherwise I'll lose."

Their conversation carried on like this for a few minutes. Josie was hardly able to talk because she was laughing so hard. The rest of us were almost rolling on the floor with laughter.

Liz hung up. Josie was able to phone her back a few minutes later, after the curse had been removed, to smooth over any ruffled feathers.

Amy arrived soon after that and we all jumped up and yelled, "Pizza Party!" again when she knocked on the door.

I really am not sure how Rachel managed to sleep through all our hooting and hollering, but she slept like a log all through the night. 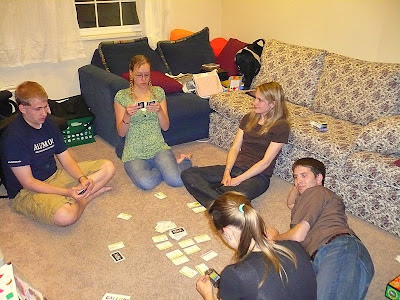 We also played Fluxx, a very fun, and confusing, game that David brought over. He also gave us a set of cards for our going-away present. We've been trying to break them in. It's a fun game!
Posted by Nancy at 1:36 AM