Since not a whole lot of interesting things happen around Orem we read mostly international newspapers. We rarely read local news, so perhaps interesting things happen and we just don't know about them. Sure, we hear about so-and-so making the front page and things like that, and we're sure to read about them, but as a general rule we steer clear of local newspapers.

Every now and then we catch a glimpse of our neighbour's paper and we read the headlines just to stay caught up with local news.

Our downstairs neighbours haven't picked up their paper in a couple of days. They've just been piling up on their doorstep and we've been reading them.

This morning as we were heading to the pool, Andrew stopped dead in his tracks and tilted his head sideways.

The headline jumped out at me. BYU track team killed in car wreck, I read. 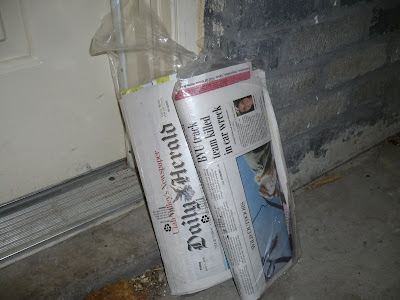 We stood there in stunned silence, our heads cocked identically to the left, for several minutes.

Rachel started to get a little antsy to get moving again and snapped me out of my stupor by biting my shirt and pulling it with her teeth.

It was then that I realized that half the headline was folded over.

"Wait a minute," I said, turning the newspaper over.

"Member of..." I read and then turned the paper over again, "...BYU track team died in car wreck." Much, much better. We were greatly relieved.

Terrible? Yes. It always makes me sad to learn that someone so young has passed away. But after standing there thinking that the entire track team was killed instantaneously? Well, this news was much better.*

*Please be sure I'm not trying to make light of the situation. She sounded really nice and I'm sure she'll be missed.
Posted by Nancy at 1:43 AM

Email ThisBlogThis!Share to TwitterShare to FacebookShare to Pinterest
Labels: news