About one month ago the sisters met to learn how to use knifty knitters so that we could teach some more needy people how to use them. In theory, they would sell the things they make and use the money to buy more yarn, in addition to necessities, so that they could have a self-sustaining source of additional income.

At first there was some discussion about teaching the lepers at the Abu Zaabal Leprosarium how to knit, but then we figured that it would be too difficult for them, given the parasthesia and the fact that their skin is sloughing off. I was wondering about that because I know when I use yarn for too long my fingers start chaffing and I do crazy things like poke Rachel in the eye with my needles.

Further more, although I've never actually had leprosy I have periodically had my skin slough off. Usually it's just the palms of my hands that suffer. I start getting little air bubbles, as far as I can tell, and then those pop and peel off and I have young skin exposed underneath and everything cracks and bleeds and it's terribly painful, making both dish doing and viola playing very difficult.

It's happened every time I've made a major move, from BC to Alberta, from Alberta to Utah, from Utah to Russia, and then from Russia to Utah, and from Utah to Jordan. And once just randomly when we lived in BC. I think it might be stress-induced or something. It hasn't happened here, which is really too bad because when we lived in Jordan Andrew had to do the dishes for like 2 months, which rocked.

So I was glad when we decided not to have the lepers learn and instead have some women at the sewing school in the village learn.

There's a village by the Leprosarium where the families of the lepers live and work so that they can support their families members going through treatment. Most people who contract leprosy are rather poor, so although the Leprosarium wasn't much to look at, it's actually probably better living conditions than they had when they contracted the disease.

Leprosy isn't actually very contagious and most leprosariums have been shut down. Most experts believe that the "leprosy" talked about in the bible was probably syphillus because syphillus is way more contagious and the social stigma associated with syphillus would make sense since it's an STD. Leprosy isn't.

The reason the Abu Zaabal Leprosarium is still accepting new patients is because most people who contract the disease are a) rather poor and can't afford to get treatment or b) wait until the disease has progressed too far and amputation and other extensive procedures are necessary. It has about 850 lepers.

We toured the leprosarium and taught some girls in the village sewing school how to use the knifty knitters. I taught about 6 or 7 ladies and was particularly impressed by Samia. She caught on so quickly and was so patient with the whole language barrier thing. Sadly, I can only remember her name because the other ladies weren't willing to repeat everything they said 20 times for me. 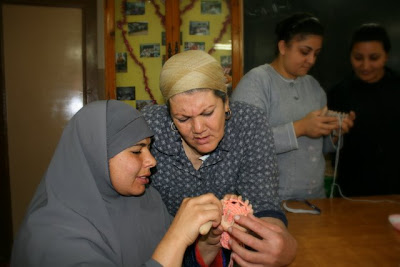 Samia showing another lady her first bootie
I liked seeing the Christians and Muslims working so closely together. There was absolutely no prejudices among them; they sat together and helped each other figure things out. I suppose they all have victims of leprosy as a family so they have something in common. That, and they all spoke Arabic and very little English so they had to band together to understand what we were trying to say, I guess. 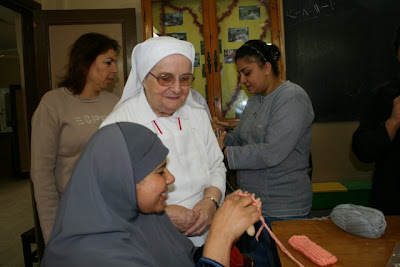 Samia shows a nun her handiwork--her second bootie
They were so excited for us to come--there were the Lindsays (the missionary couple here), 3 other ladies from the branch (besides me), and Elder Lindsay's niece and two of her friends. The sewing room was packed full! It was fun to hear all the chatter going on in broken English and Arabic.

I learned a new word: scissors, or مقص. In Egyptian Arabic they say m'ass because they don't pronounce the 'q.' Over the chatter we'd hear people calling out for the scissors. We all started using the Arabic word because we were outnumbered by Arabic speakers at least 3 to 1.

"M'ass! M'ass!" we'd hear shouted over and over again. We only had two pairs of scissors for everyone to share.

I think that is the only new word I learned today. 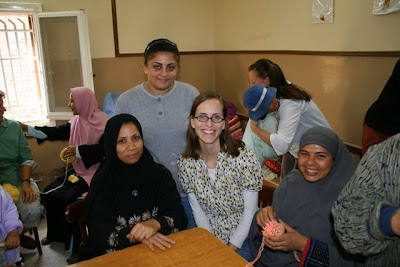 Me with Samia and some other ladies I helped to teach
When we'd been there for a number of hours and felt that at least some of the women had gotten the hang of it, we left to tour the leprosarium.

The leprosarium is divided into three different areas, I think. There are two men's dormitories and one women's dormitory. There are 10 kitchens, five of which were provided by LDS Charities. There is a bakery, which was rather interesting. 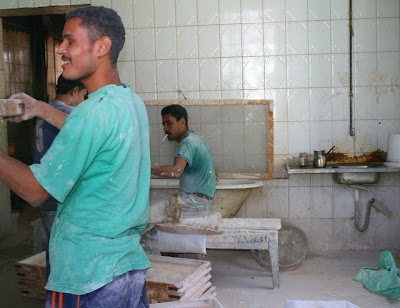 Obviously they don't have a health code here.

We got to go in the bakery and see them make the baladi bread--which is, essentially, pita bread. They just don't call it that.

Once the smoking bathtub guy has plunked balls of dough on these big boards, a young man carries them to the oven, which is equipped with a conveyor belt. Then this man kind of flatten outs the dough and sends it through the oven where it's fired up. 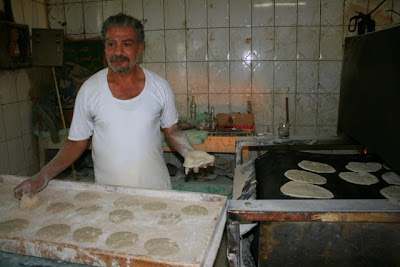 It comes out the other end nice and puffy and steaming hot. 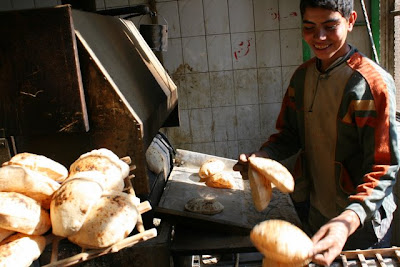 Then they are laid outside to cool off. The man in the picture below is a leper. The bacteria isn't active because when they first come to the leprosarium they are quarantined for 2 weeks while they receive the inoculations, then for another 2 months while they undergo a series of tests to see if the inoculations worked. They have to have three negative tests before they are allowed out into the colony. This man lost most of his fingers. 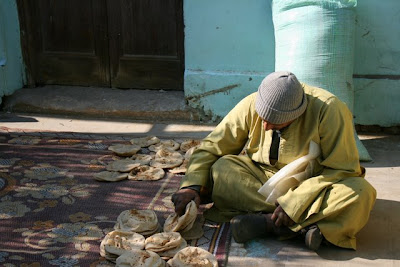 We didn't see many people with horrible deformities. There were no doctors on site today and we didn't want to go into the dorms to visit unannounced. But apparently there is this one man who has been at the colony for about 50 years. He lost both of his legs and is blind, due to leprosy, but is the nicest mot positive man. One day I hope to go back and meet him.

At the very end of our tour Elder Lindsay took us to see the water purification system that LDS Charities helped revamp. The watershed used to only have sand filters, and those hadn't been changed since the start of WWII, so only like seventy years! Elder Lindsay said that that type of filter probably needs to be changed at least every decade, so a change was well overdue. In addition to changing the sand in the filters a chlorination system was installed. 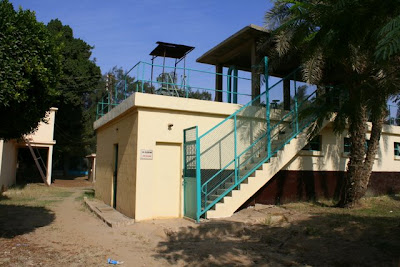 The pump house
A plaque was put up in honor of latter-Day Saint charit, how sweet! 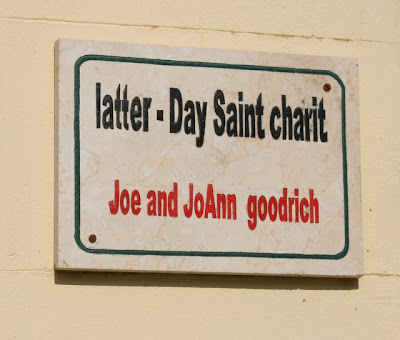 There were also signs all over the place promoting good hygine, something that is really lacking in Egypt. This sign is reminding patients to dispose of their used bandages in the incinerator bins instead of regular rubbish heaps. 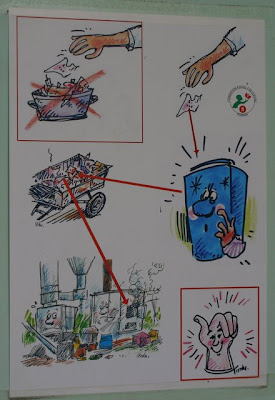 There were other signs as well, reminding patients to bathe and wash their hands and their food. One gal that went with us is a dental hygienist and she was just going crazy looking at everyone's teeth.

I have a feeling she's going to single handedly try to supply every Egyptian with a toothbrush.

It's so hard to know what to do, though. As my friend Shallee so aptly pointed out, if not given properly, aid can do more harm than good. When she got home from going to Ghana the first time, Shallee started taking classes in African studies and devoted all her spare time to NGO's (and Danny, a little), so she knows much more what she's talking about.

I've experienced some similar things here, with Egyptians trying to rip me off just because I'm American (and therefore am loaded with money that I just am dying to give away for nothing). Andrew is reading a book about USAID right now and a lot of the information in there is rather startling, specifically how Africa has become such a pawn in foreign hands because of all the aid given them.

Some aid is good and necessary--like providing clean drinking water. But some aid just is not. It's hard to know how far to go and how much to give, without enabling people or creating too much debt on a country's government.

The Relief Society has helped the Lindsays assemble hygiene kits (including toothbrushes) and school kits to give out, but I think it will take a lot of education before the majority of the population understands hygiene and knows how to achieve good hygiene.

Education can do so much for people.

I then mentioned to Sister Lindsay that if we gave out cloth diapers, which hypothetically would be more useful than disposable diapers, we'd probably have to teach the women how to use them. Trust me, there is a generation gap. My generation does not know how to fold cloth diapers. I had to have my mom teach me, and then I tutored a few girls in my old ward. Everyone just uses disposables, but cloth is much more practical.

Perhaps that will be the next project we'll do. Skills are such a better thing to give as aid than material things. Teaching the women to knit will enable them to be independent. They will be able to make their own socks and hats, sell their own socks and hats. It's a marketable skill. I doubt they'll get rich, but at least they'll be able to help themselves.
Posted by Nancy at 11:45 AM