We worked with our hotel to reserve a van to take us around the West Bank for our second day in Luxor. That meant that we had to be up early, but I suppose early is good. It meant that we beat the crowds and the heat.

The weather wasn’t terribly hot—it is January, after all—but by the time we hit the Valley of the Kings we were taking off layers.

Our first stop was at the Colossi of Memnon, two gigantic statues that used to guard Amenhotep’s temple. Ironically they are still standing guard while the temple was reduced to inexcavatable rubble.

When we were visiting the Colossi back in 2006 our guide told us that you could hear the wind whistling through one of the statues if you listened really closely. We had the Lonely Planet with us this time and they say that, while this used to be the case, the Romans patched up the hole in the 3rd century AD so there no longer is a whistle. Obviously tour guides still tell people that it whistles because it’s fun to see how gullible people are, and how cute their faces look when they’re straining to hear the non-existent whistle.

Andrew was acting as our tour guide and, although he read that there was no longer a whistle, he suggested that we all listen for the whistle, anyway, just so that the other tourists didn’t feel bad for craning their necks toward the statues and cupping their hands behind their ears.

He was also acting as photographer, which is why there are a lot of pictures of me and Rachel and hardly any of him. 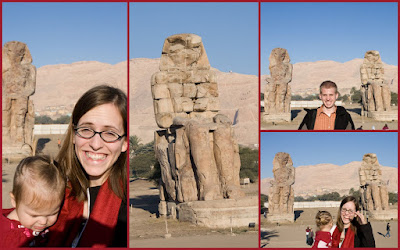 From there we were rushed off to the Valley of the Kings. All of our preselected tombs were closed, which was kind of a disappointment. They periodically close the tombs to allow for restoration and preservation work, which is probably a good thing, but still a disappointment.

Interestingly enough, we ended up going through the exact same tombs that we went in with the BYU tour. It would have been nice to see something new, but since we couldn’t remember which ones we had seen the first time we came I guess that’s our own darn fault. And nothing there is really “new.” In fact, it’s all pretty old, so seeing something new would have been quite impossible. 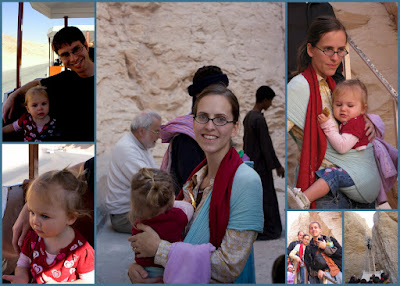 I was a little nervous about going down inside the tombs because it had been so long since I’d been inside them and I’d forgotten how it was like. The last ancient thing I had been down was the Dashur pyramids, and I was carrying Rachel, and that was harsh. I happened to have Rachel strapped to me on this day, as well, and the first tomb we ventured off to was that of Tuthmosis the Third, which happens to be up a tall, steep staircase. It’s on the Lonely Planet’s list of best tombs though, so we figured we should go see it. The minute we did, we knew we had been inside before, but it’s well worth the visit, anyway. It has the first tomb in the Valley of the Kings to be painted. Plus, the sarcophagus is still inside, which is pretty cool if you ask me.

Personally, I think they should have more things inside the tombs and less inside the Egyptian Museum. The museum is brimming full of ancient stuff that is so uncatalogued it is rather overwhelming to visit, and impossible to see in one day. I think it would be more interesting to see some of these relics in their natural environment. Like a theme park for ancient Egypt.

They could do rides and things through the tombs. Just load people up on a wannabe rollercoaster and zoom them through the tombs, popping out a real mummy every now and then, showing off treasure, statues, and sarcophagi. In my mind I’m seeing a Disneyland Indiana Jones/Pirates of the Caribbean-esque ride, only more educational, natural, and realistic.

I’m always so disappointed when I go inside things like pyramids and tombs. And Petra? What a joke. The Treasury is completely empty and uncursed. There is a fantastic facade and you walk up the steps expecting axes to start swinging at you and instead, rather anticlimactically, you see an empty, square room. Blah. If they had some treasure heaped up in there it would have been way cooler.

But I digress…that isn’t how it is at all. I found myself hauling Rachel up a long flight of stairs dangling over a crevice, trying to keep up with a crowd of people not lugging a quarter of their body weight in baby, wishing that rollercoaster-type ride would suddenly whisk me to the top of the stairs.

The stairs are a bit of a climb, but it really wasn’t that bad. It’s nothing compared to climbing inside a pyramid. And Rachel could have walked down the ramps to get in the tomb. In fact, the ramps were so not-steep that we let Rachel walk everywhere else after we made it back down the stairs.

After visiting Tuthmosis’ tomb we meandered down to see Amenhotep the Second and Horemheb. Both were closed. So we went to plan B, backtracked a little, and visited the tomb of Tawosret/Sethnakht instead.

This tomb is a little humorous. Apparently Tawosret started building it and had her name and cartouche all over the place. Later, Sethnakht decided that he’d take over and covered up her name with plaster and replaced it with pictures of scarabs or his own cartouche. There are two burial rooms and two mummies were found inside. This tomb is definitely interesting and well worth a visit.

After we’d come up from inside the tomb, Rachel started dancing around like a little person that needs to go to the bathroom so we figured we should find one. We looked at a map and found that the bathrooms were on the opposite side of the valley that we were (not that we expected them to have bathrooms out in the middle of no where, or at all) so we trekked on over there.

We didn’t feel like walking around trying to find another open tomb and Ramses IX was right there, so we decided to go see that one and be done (you’re only allowed into three tombs and they actually mark your tickets). This one was the epitome of anticlimacticity.

It seems fairly interesting at first and is, in fact, the most-visited tomb of the valley. The reason behind that little fact, I’m guessing, is because it’s located right by the WC. It’s really nothing special.

The walls, on the way down, have some interesting hieroglyphics depicting animals, people, the Book of Life, yadda, yadda, yadda. They’re all behind Plexiglas so that no one can touch them (which is fine…and I think they could really use Plexiglas to their advantage by employing my theme park idea) and it seems like the corridor is going to go on forever.

There were two lines, one going in, and one going out. And they stretch as far as the eye can see. So we just knew it was going to be neat.

Suddenly the line we were in, the one going in, slowed to a crawl and I spent most of my time trying to keep Rachel focused on pointing out cows on the wall instead of screaming. We were inching forward, waiting to see whatever spectacular thing it was everyone was stopping to stare at for so long. And then we got there!

We stopped and stared. This? Was it? This empty room that is equally wide as the corridor, only decorated far less-enchantedly (read: not at all) was it? We’d waited in line for this?

While we stared, in slack jawed shock, at the dismal emptiness in front of us, we were holding up the line. A “guard” in a gallabia yelled something to prod us on. We turned around and left, still in stunned silence.

I wanted to warn everyone still standing in line that this tomb was not the best tomb of all the tombs. There are other tombs, that are more interesting, that have no line to go in.

It was fine, though. Still good. I was just expecting more, I guess. At least for the burial chamber to be fairly huge, or at least bigger than the hallway. What was Ramses IX thinking?

It’s a pretty impressive temple but I’m still torn about whether or not to recommend visiting it. 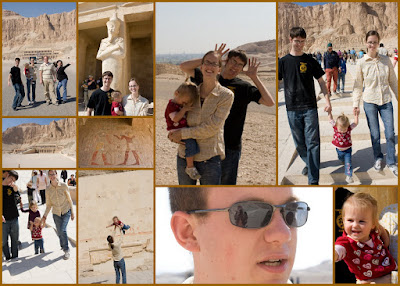 There are good parts, like the amazing hieroglyphics mentioned. 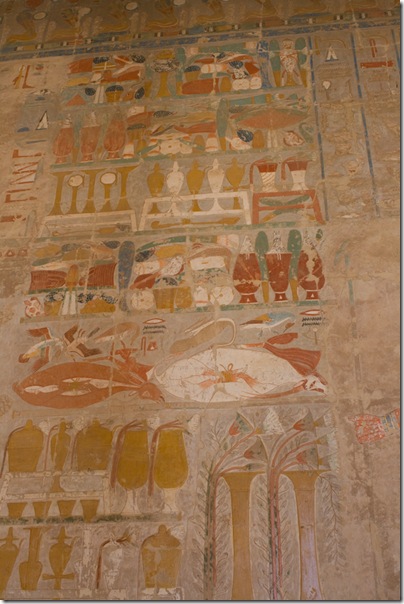 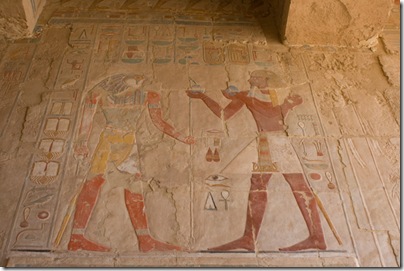 And not-so-good parts, like the non-existent tree that is so clearly labeled. I don’t know why they label thing like this when there are only like 3 labels in the whole Egyptian Museum (I kid. There are probably 5 or 6 labels in there). 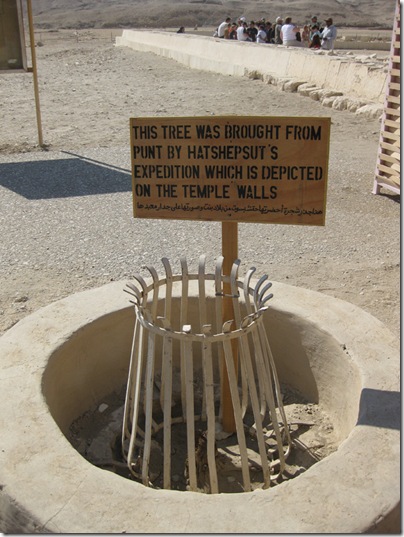 I’ve been there twice, but I don’t think I really want to make it a third. There are other places I’d rather see but I won’t judge you if you still want to go.

Rachel was borderlining on misery by this point in the day, but she managed to be pleasant for most of the visit. That’s because she spent most of her time picking up rocks and rolling around in the dirt. I stopped trying to make her not get dirty because it was either dirt or tears. I usually choose dirt over tears.

After everyone had had their fill of gaping at hieroglyphics and/or tasting rocks we went back to find our van. While we were walking through the “gauntlet” of vendors, Andrew realized that he didn’t know where our Lonely Planet book was. A tragedy, I know.

We thought that perhaps we had left it at the ticket booth after we got in a huge fight with them about our status as students, but it wasn’t anywhere on the desk, that we could see, and no one wanted to go up and ask them about it because we were worrying about something else we had lost.

The van was no where to be found. Andrew, who was terribly worried about our book, went off in search of the van while we sat on the curb and waited for him to return. I gave Rachel some juice and cookies from the backpack, which she found much more satisfying than rocks and dirt, and Andrew arrived a few minutes later with the van, our driver, and the Lonely Planet. He had left it in the van, thank goodness. I don’t know what we’d do without that book.

We all piled into the van and settled in for our drive to Madinat Habu. It was only about 11 AM and we were all exhausted. Rachel fell asleep, and I was just about to doze off, when the driver pointed out the Ramesseum, launching a discussion, piloted by Andrew, about the Ozymandias. We were almost there…and most of us just wanted to go back to the hotel and nap. 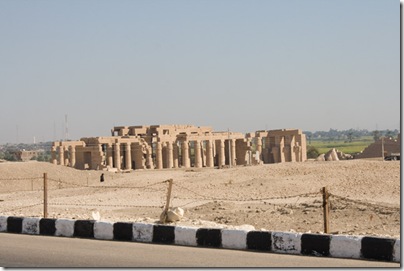