This morning Rachel was blessing the food. She can say a short prayer by herself but this morning she tried to cut corners by leaving out the middle part and skipped from "Dear Heavenly Father" to "In the name of Jesus Christ," so I had to help her.

"We're thankful for the food," I prompted her.

As in America, most of the children-friendly cereals are branded with an obnoxious cartoon animal. At first I wasn't sure their animal-branding would work since there are no commercials for specific foods here (except for Kraft cheese and Philadelphia cream cheese and some random Italian tuna company), but apparently it does because Rachel recognizes her cereals by animals.

It started with corn flakes. As in America, the cornflake boxes here are plastered with a ridiculous-looking rooster. His name isn't Cornelius...in fact I don't think he even has a name (that part of the marketing scheme hasn't been thought through, I guess)...and Rachel has never seen him dive off a diving board or do any stunts on commercials, like his Kellogg's counterpart (I seem to remember a diving board commercial)...but she knows that if she asks for "chicken cereal" she'll get corn flakes. 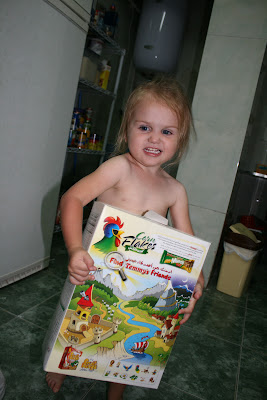 Personally, "chicken cereal" does not sound all that appetizing to me, but who am I to judge?

We also have "elephant cereal" (Loopy Nuts--an apparently peanut flavored loop cereal that looks and tastes like foam), "rabbit cereal" (rice crispies of sorts--much harder to chew than American rice crispies, but surprising rice-like, so much so that it might actually be made of rice), and "alligator cereal" (Fruit Pops--another foam-like loop cereal that is apparently flavored with a variety of natural fruit flavorings and colorings). 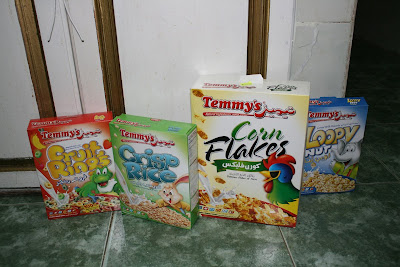 There are others, but that's all we have in our cupboard right now (well, that and bran flakes and granola, but those aren't lucky enough to feature an animal) so that's all I can think of.

This morning Andrew told Rachel that one day should could have "alligator cereal" that actually tastes good (that is open for debate). I told her it wouldn't have an alligator on it but maybe a bird (probably just a kangaroo...we're into buying cheap brands like Malt-o-Meal...for you Canadians who've never heard of this brand, doesn't that just sound not-appetizing?).

She wasn't impressed and said, "Nooo! I like alligator cereal!"

That's just because you don't remember what real cereal tastes like, sweetheart!

Sometimes I'm tempted to splurge and buy a box of good ol' Kelloggs cereal just so that Rachel knows what good really is. But do you know how much that costs? I can never remember, but I know that every time I check the price in the store I'm flabbergasted. Andrew estimates around 55 LE per box, which equals just about 10 USD! I don't want to be stuck paying that when she refuses to eat the Egyptian kind anymore because she knows that cereal can actually taste good. Not that Temmy's is terrible...it's just not great. I would rank it an O.K.
Posted by Nancy at 2:10 AM