Apparently Rachel has a favorite Disney princess—Cinderella. This is all based on a deck of cards that we have; she has never, to my knowledge, seen Cinderella. We decided to order it on DVD and have my little brother bring it out with him in August, though, just so that she knows what she’s referring to when she says Cinderella is her favorite.

When I asked her what kind of birthday she wanted, she didn’t really know. She wanted a red birthday, with cake, and party hats.

But then her little friend Abby had a birthday and Natalie put pictures of the Nemo cake and the jellyfish balloons and everything fishy and Rachel realized what I meant when I was asking what kind of birthday she wanted. She changed her answer.

Frankly, the task of creating a themed birthday party while living abroad seemed a little daunting to me. That’s why we went with the whole FHE-theme. Come, socialize, make Rachel feel special, call it a party. Easy.

Andrew likes to say “an artist never blames their tools.” I say phooey. While he has a point, most successful artists that I know have a lot of tools, and good ones, too!

We couldn’t find a cheap enough doll around Maadi so Rachel and I headed off to Dar es-Salaam, a big outdoor market with everything from clothes to fruit to Barbie dolls, and battled our way through the hordes of shoppers there until we came to some toy shops and found a Barbie doll for 10 LE.

We had to find icing sugar, which most of the local grocery stores usually carry. It’s risky to purchase, though, because ants are highly attracted to it and will eat through the package to get to the sugar. It’s also tends to be a little more lumpy and a little less powdery than the icing sugar I’m used to working with.

I spent over an hour last night picking ants *grumble, grumble* out of the sugar and finding lumps to smash before I even started making the icing.

Assembling the cake was easy enough. We used a little pan we picked up at Moudy’s for the base of the dress (the same one we used at Christmas time for our gingerbread mosque) and stacked a few cupcakes on top of that.

Icing the cake was another story entirely. The icing was so soupy that it kept dripping down her dress while I was decorating. I eventually just lathered the base coat on and stuck it in the fridge for a half hour so it could harden a bit. It kept falling off the cake completely. Finally it stuck, though, and I smoothed it out the best I could and then added the finishing touches…which also kept melting off almost as fast as I could put them on.

It didn’t help matters any that, while I had remembered to pack all my decorating tips when we moved out here, I forgot to pack icing bags. Cheap rip-off Ziploc baggies just don’t work quite as well. And since the icing sugar is more granular than our icing sugar back home I couldn’t use the tips I was planning on using because the icing wouldn’t squeeze through. *Sigh.*

After 5 hours of killing ants, running back and forth from the fridge to the table, renegotiating rent with our landlord, and dealing with oozing icing, I finally finished the cake. 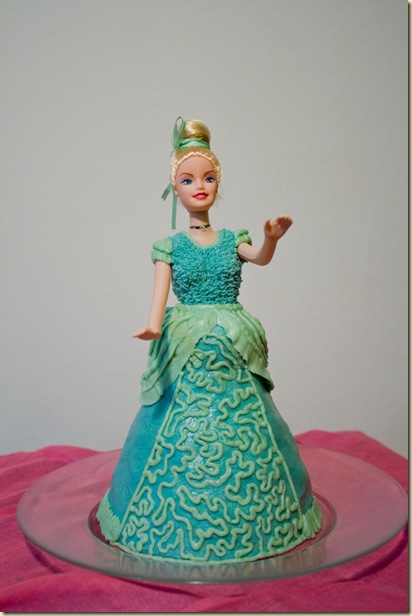 Andrew was apparently impressed with my Cornelli lace, even though that’s the part that I really needed the smaller tip for, and, besides the stars on Cinderella’s bodice, it was the most drippy part to decorate. Maybe I should have decorated the cake in the fridge…then we could both have stayed cool. Anyway, Andrew took like 20 pictures of the front of Cinderella’s skirt. So funny! With the camera up that close, though, you can really tell how much the icing is sweating. Icing isn’t naturally that shiny. 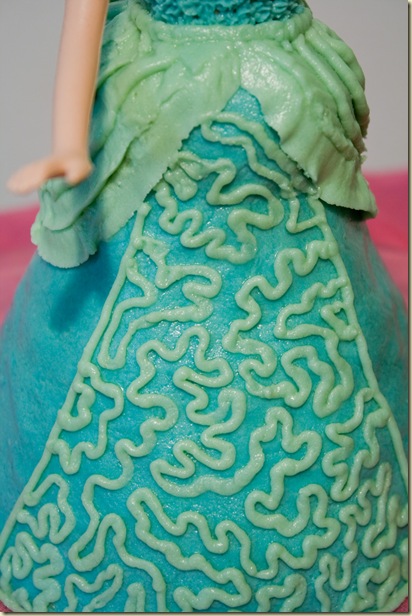 We went to bed at 2 AM last night, leaving dishes in the sink and a long list of things still to do like mopping the floors and cleaning the bathroom. We decided that we could easily put those three activities off until the morrow.

When I woke up after a long, sweaty, muggy night, I wanted nothing more than to take a shower and get to work. But when I turned on the tap, nothing came out. *Grumble, grumble.*

So we spent the whole morning waterless while I fretted about not being able to clean my toilet before the company arrived. I was so happy when it turned back on. I cleaned the toilet right away. And guess what. No one even ended up using the restroom, anyway.

And we didn’t even eat the Cinderella cake, which is really okay with me because Rachel hardly even noticed when we brought it out—there were so many other things to pay attention to (like the swarm of excited children bunched up behind her). Maybe tomorrow she’ll be more impressed. Or at least notice.

It was fun to make a cake again. I haven’t decorated a cake in a long while…probably because it isn’t quite as easy here. Challenges are fun, but I told Rachel that if she isn’t satisfied with this princess cake that she can have one again next year and maybe we’ll be able to borrow some of Grandma’s decorating things—like a doll pick so that I don’t have to try to shove Barbie’s huge (and de-legged) hips through a too-small hole in a cupcake ever again.

No pregnant lady should ever have to shove a body through a too-small hole 99 days before their due date. It wasn’t pleasant to think about what the future holds while watching the cake crumble…probably I should have either cut a bigger hole or just thought about something different…but it’s kind of hard to control where your mind wanders at 2 AM.