When the dilemma of whether to bring a dessert or salad to a potluck event is presented, Mormons have come up with the perfect solution: a desserty salad. I know of no other religious culture that has a deeper connection to Jell-O salads. At my own family reunions potluck dinners usually end up being about 50% Jell-O. We just love the stuff, I guess.

Since we were having a potluck of sorts to celebrate Pioneer Day this afternoon, I had Andrew sign me up to make a desserty salad on Friday at church.

My grandma Conrad made the most delicious lemon pudding salad. I know I’ve mentioned it more than once…it’s just so good. In North America it’s pretty easy to assemble. All it requires is fruit, lemon pie filling, and whipped cream. Usually my grandma would use the instant pie filling you buy by the Jell-O and a container of Cool Whip. Make up the pie filling, cool it off, add Cool Whip, mix in fruit.

Except for here. Here you can fail making anything, I’m pretty sure.

I made the pie filling this morning, while Rachel and Andrew went to get some last-minute things for the party, so that it could cool off while I took a nap.

I don’t know what my problem is this pregnancy. I think it might just be because it’s so hot, but I still feel faint all the time and never seem to be able to recover (read: stand back up without falling over) until I’ve had at least a little nap. I almost tried to talk myself out of having a nap today, but then I almost died making the pie filling (okay, that may be a slight exaggeration) so decided napping was worth it.

Making lemon pie filling from scratch is just about as complicated as making it from a package, I think. Except for trying to separate eggs while not fainting. I threw the last one in the pot half-separated and completely unbeaten so I had stringy white stuff all through the pie filling when I was finished. I couldn’t help myself; I had to sit down, quickly, and had to put the egg somewhere…

When Andrew got home and I woke up, I had him whisk up some whipping cream for me. Whipping cream by hand is no easy task, but it certainly is doable. We perfected our method at Christmastime last year when we were whipping and whipping the darn stuff for what seemed like hours and nothing was happening.

If you hold the whisk between your two hands and twirl it like you’re rubbing sticks to make a fire, you’ll be done in a matter of minutes. Seriously, like 3 minutes…that’s about as fast as an electric mixer, right?

Andrew overdid the first batch of cream, so it was a little more buttery than we wanted, but still creamy enough to work. The second batch went a lot smoother.

We mixed the salad up and it was beautiful…but then after a half hour ride in the car it was less than beautiful. The cream was starting to separate from the pie filling and it was really watery and gross-looking. Andrew put it in the fridge right when we arrived, but when we got it out and put it on the table with the rest of the food a few hours later it still wasn’t looking so good.

And then it sat in the sun for about a half hour while we tried to round up the kids from the swimming pool so we could bless the food.

By the time people started heading through the food line it looked like a bucket of puke. 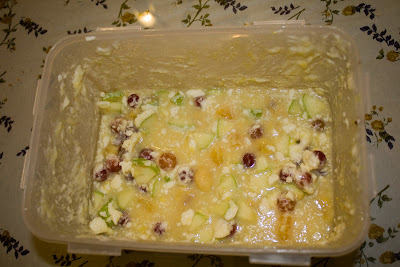 I took some and Andrew took some, but I really didn’t think anyone else would.

But remember how I said this salad was a no-fail recipe? Apparently it was more fool-proof than I thought because when I went to the line for seconds, Charlene stopped me and asked,

“What’s your recipe for the fruit salad? I have to have it! It’s delicious!”

“Are you serious?” I replied, “It looks so gross! It’s just whipped cream and lemon pie filling, but the cream separated from everything else and it’s not supposed to do that…”

And then we talked about how cooking in Egypt always yields interesting results. Things just rarely turn out how you expect them to. Like this salad.

It’s actually supposed to be quite a pretty salad—a creamy yellow base with colorful bits of fruit peeking through—but mine wasn’t pretty at all. But people still ate it, which I wasn’t expecting, and they loved it, which I was expecting…until I walked through the line and saw that the Egyptian sun had transformed it into vomit.

At least Grandma’s recipe is still pleasing crowds, despite the ghastly presentation I made of it.