Baptism at the Red Sea

Today Elisabeth got baptized. We travelled out as a branch to see her be baptized in the Red Sea. We rode out with the Cummings and followed the Knapps, Houses and Cannons (who had other branch members in their vehicles as well), stopping on the side of the highway at the spot the branch traditionally uses for such purposes. 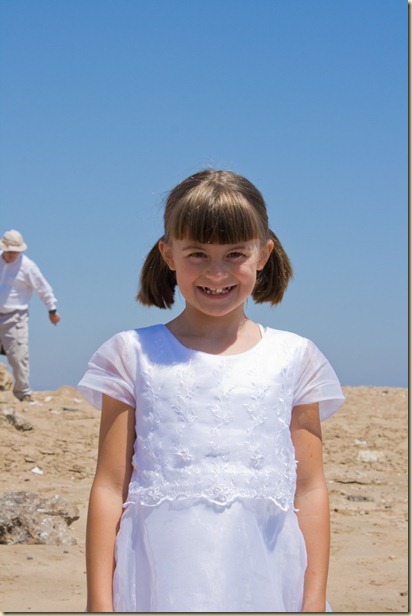 Within two seconds of arriving at the beach, Rachel was covered in sand from her nose to her toes; she’s a sand-magnet. The kids had fun playing in the water while we got chairs and things set up—most of the children there were girls. I actually think Josh was the only boy since the Cummings’ boys are sick today and didn’t come. He was a real trooper, though, and played rather nicely with the girls. I guess he’s used to being outnumbered since he is the only brother in his family of four sisters. 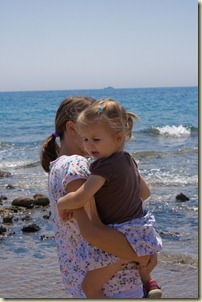 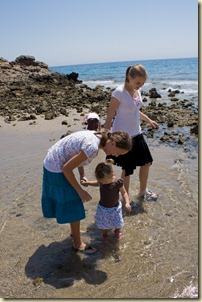 Amiee spoke to Elisabeth about baptism and the Gift of the Holy Ghost. She said that so far in Elisabeth’s life, she has been a caterpillar, but now she is becoming a butterfly. She’ll come up out of the cocoon and she’ll be beautiful and filled with the spirit, but that doesn’t mean that she knows how to be a butterfly. She’ll still have to learn how to fly and how to care for her wings and, of course, she’ll make mistakes. But that’s alright because she’s still learning.

I really liked that because when I was younger I don’t think I ever quite caught on to the fact that the sacrament allows us to renew our covenants every week—that we are expected to make mistakes because that’s what human’s do. The important part is that we repent of and learn from our mistakes.

Amiee did a wonderful job explaining this concept to Elisabeth.

Andrew was asked to be a witness for the actual baptism. He was so excited to walk out into the water in his Sunday clothes…it was a little ridiculous how excited he was. We were told we could take pictures of them in the water while they were trying to find a good spot to stand; they wandered around for quite sometime until Brother Knapp yelled out,

“Tell us when you get to Hurgharda, Brent!” 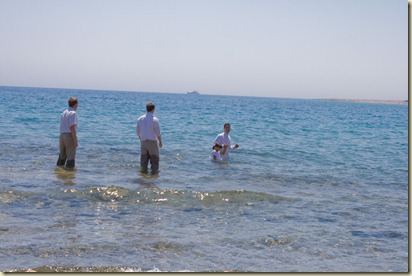 I think one problem was that the waves were so choppy. Elisabeth almost got swallowed up by the sea several times, just walking out to be baptized. Eventually they found firm enough ground, though, and Elisabeth was baptized.

This was Rachel’s first time attending a baptism since her cousin Deklan’s baptism in 2007. She doesn’t really remember that one. She’s familiar with the idea of baptism, though. She told us at dinner a couple of nights ago that Jesus was baptized. Still, the idea of baptism by immersion was a little scary for her.

I had been sitting on one of the few luxurious camping chairs, provided by the Cannons. Sometimes when you’re pregnant you are offered luxuries like chairs. (Joseph, an Egyptian member in the branch offered me a kursy while we were waiting for everyone to meet at the church so we could arrange rides—I thought it was nice of him to offer but wondered where he was going to dig one up).

All the little children had gathered at the water’s edge to watch, though, and Rachel wanted to go, too, so I went up with her.

When Elisabeth went under the water, Rachel tugged on my skirt,

She was more comfortable with the whole situation after I explained to her, again, what was going on, while Andrew trudged out of the Red Sea wearing his now-soggy Sunday clothes, along with Elisabeth, Brent, and Cody. 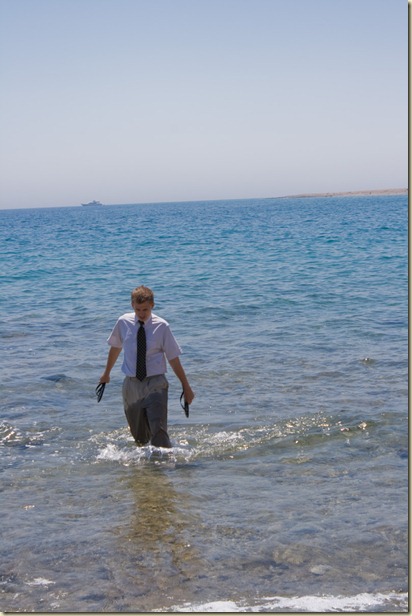 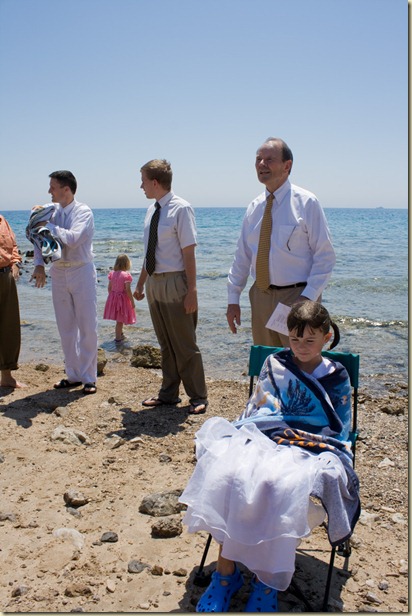 After Elisabeth’s confirmation, we set out to find a bigger beach to have a little luncheon/beach party, hosted by the Houses. 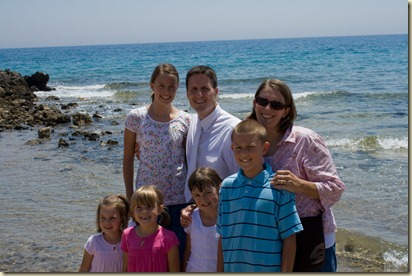 Unfortunately, the traditional spot for post-baptism gatherings has been snatched up by the secret police. Instead of being a public beach, it’s now a private beach reserved for the secret police and their families to use whenever they please. Brother Knapp was very disappointed because, he explained, that section of the beach was so beautiful and sandy and calm. And was where they had always gone for branch parties at the Red Sea.

We drove around for a while searching for a spot and eventually ended up exactly where we were before.

The water had calmed down quite a bit and the beach was big enough for our small group, so things worked out.

Rachel had a blast playing with so many kids around. In fact, I hardly interacted with her at all. She was always being toted off into the water by someone or other, or was being taught first-class sandcastle-building skills by someone else. 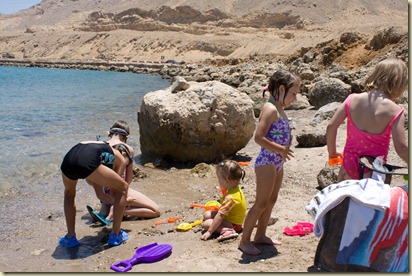 Once when Rebekah was carrying Rachel in the water she tripped and dropped Rachel, she scrambled to pick her up, but Rachel was just fine. She came up out of the water smiling. Later when Elisabeth picked Rachel up, on the beach, she lost her balance, stumbled backwards, and tripped over Josh (who was kneeling down to play in the sand with the little girls), sending both Elisabeth and Rachel tumbling on the ground. Both girls just jumped up and ran into the water to rinse off. I eventually lost count of how many times Rachel got dropped; she was dropped so many times it’s not even funny. It’s probably good for her, though, since she doesn’t have any older siblings of her own. 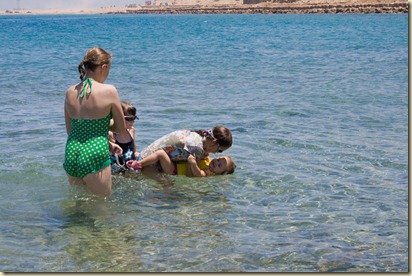 She had no qualms going into the sea at all and probably would have let one of the 5 year olds carry her out into the water if I (or any of the other mothers watching) would have allowed it. And even though there were big jellyfish washing up on the shore again, like the first time we went to the Red Sea, she didn’t squawk about “jellybeans” once. She would even follow the other little girls into the water on her own accord when the tide was roaring in. 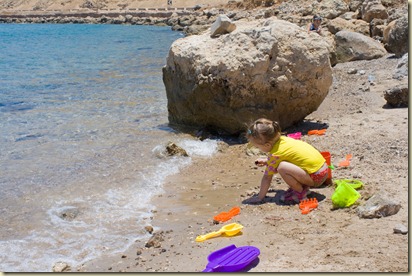 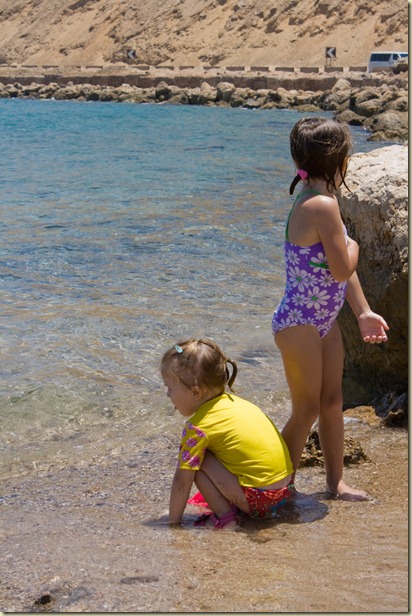 They were all following the water’s ebb and flow, screaming as it chased them or they chased it. Rachel continued the screaming and running long after the older girls had retired it. 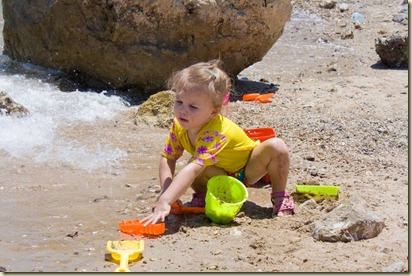 I was quite amazed at how fast the tide came in. It seemed like the sea would be perfectly still for an hour or so and then would just start roaring and we’d be rushing to move the chairs and toys away from it’s grasp. And then, after a few minutes, it would be still again. It was kind of strange.

What was also strange was that everyone seemed to be getting stung by jellyfish. We did see some big jellyfish washing up on shore, but we’ve seen those before, and I’m pretty sure that a) they’re dead and b) they don’t sting. I was touched by one once and it just felt like some huge gelatinous mass bumped into me; I turned around to find that a huge gelatinous mass had bumped into me, but it didn’t sting at all.

I think they are probably some variety of moon jellyfish and probably look like this when they’re alive, although we’ve only ever had dead ones wash up on shore. They’re big but they don’t sting and aren’t really anything to worry about.

Still, everyone kept complaining about stings. I’m quite sure everyone felt it. I know I did. To me, it felt like a pinch that wouldn’t go away. I kept trying to find what was pinching me, but nothing was…I was just being stung. Poor little Emma (I think it was, though it may have been Elisabeth) ended up with an actual welt on her foot.

We couldn’t figure it out because only two jellyfish had washed up and we removed them from the water. We kept swimming though since the water was so clear and just the perfect temperature. Little jellyfish stings weren’t going to stop us…even though they were quite uncomfortable and the stinging sensation lasted for hours. 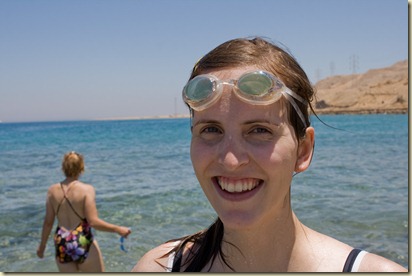 I borrowed a pair of the House’s goggles so that I could do some fake scuba diving. If you went out far enough you could see clown fish and things like that. I didn’t ever make it out that far because I had to take off my glasses to use the goggles, rendering me blind for all intents and purposes. Swimming blind makes me a little nervous, especially in untamed bodies of water (ie: not a swimming pool) where there are tides and sharks and jellyfish. 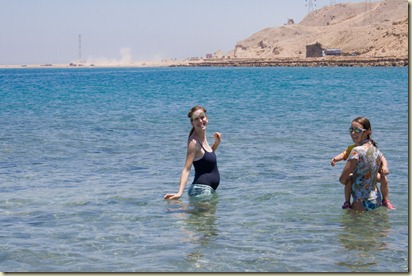 I did get to see some fish, though, and some sea urchins and things. It made me wish I had an underwater camera. The ocean floor at this location is much more interesting than the plain ol’ sandy bottom at Ain Sokhna, though far more dangerous. No one was allowed in the water without shoes on for obvious reasons (sea urchins, being one of them). I did go quite a ways out there, though, and it was there that I noticed that the interesting looking plant-life on the ocean floor wasn’t plant-life at all. It was…upside down jellyfish. They’re called Casseopia (I looked them up when we got home) and look like algae, almost, but they aren’t. They’re jellyfish and they sting their prey by releasing a mucous when the water above them is disturbed.

We kept swimming over them, which is why we kept being stung—their electrocuting mucous was floating up and stinging us and we didn’t suspect a thing from the actual culprit because we were too busy hunting for a pulsing, throbbing, monster of a jellyfish. 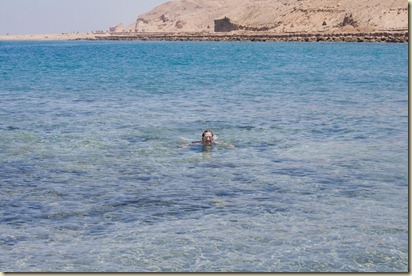 We all had a good time, though, and were quite tired on the ride home. Almost everyone in our car fell asleep, except for the row Rachel and I were sitting on. Poor Rachel kept being distracted by things and making embarrassing remarks—she kept telling me that Sister Knapp was so big, big, big, while she, herself, was so little, little, little. She also was quite concerned about Sister Knapp’s wrinkles and kept talking about those.

Sister Knapp was really nice about it, though, and didn’t seem to mind. I guess that’s because she’s a grandma and grandmas are usually bigger and more wrinkly than two-year-olds. It also could be that Rachel kept telling me, “I like her. Sister Knapp. I like her.”

Eventually Rachel forgot about staying awake to stare at and play with Sister Knapp and fell asleep. She had about a half hour nap, which isn’t bad for Rachel.

When we got home, Andrew let me go to bed while he made dinner. That was so nice of him because I was so tired and haven’t been feeling well lately (and he got to nap on the way home).