We had hoped in vain to be able to go to the 4th of July party hosted by the American/Canadian embassies—apparently it’s this huge carnival-like thing. Unfortunately, you had to get tickets beforehand and in order to get tickets you had to present a passport (American or Canadian) and ours were still being held hostage at the Mugama.

Andrew begged to splurge on some corn on the cob, though, so we got some this week, along with a few handfuls of cherries (which are about as expensive as buying gold), and I even made some Jell-O.

We went out to dinner with my “cousin” JC, who flew out from France to visit his friend Maïte, who is here from Germany doing an internship.

While we were waiting for them in front of the Mugama, a couple came and sat on the bench next to ours. They had a very curious-looking container filled with a few centimeters of water and two little green blobs. Rachel had to investigate.

She quickly made friends enough with the man holding the container and ended up getting to watch his turtles the whole time we were waiting for JC and Maïte. She loved them.

He asked her if she knew which one was a boy and which was a girl.

“Okay, which one?” he asked (he spoke English very well).

“That one,” she said, pointing to the bigger one.

“Is that the boy or the girl?” he asked.

Either that or it was a lucky guess. It was nice to have such great entertainment for Rachel while we were waiting. Her favorite was when the little one (the girl) would climb onto the back of the big one (the boy) and he’d walk around the tank, taking her for a ride. Rachel thought that was hilarious.

Her least favorite part was when they’d climb up the side of the container. She was afraid they were going to get her, even though they were each no bigger than a silver dollar and weren’t even close to being able to climb out of their habitat.

She found a little stuffed turtle in her toy box and she’s been playing with it all day today. It’s funny how she remembers about toys that have lain so long forgotten at the bottom of the toy box one day and they suddenly become her favorite and most entertaining toy.

We were a little worried about meeting JC because this was really our first time meeting. We weren’t sure if he would recognize us. But then I remembered that we’re pretty obviously American and all three of us are considered “blond” here. We’d be pretty easy to spot. And we were.

JC found us right away and came up to introduce himself and Maïte. Then we all walked to Tabouleh together.

Tabouleh is a fabulous restaurant that serves the most delicious Levantine food. We love it. The food is good and the atmosphere is a perfect mix of old Bedouin and more modern Arab art; more likely than not Um Kolthum or Fayrouz will be singing a song in the background. It’s frequented by foreigners and locals alike. It’s just a great place.

I think the only Egyptian food it serves is foul. Unfortunately, Egyptian food isn’t that great. Levantine cuisine, on the other hand, is fabulous (as long as you stay away from brain sandwiches and things like that).

We ordered a bunch of appetizers to share: hummus, falafel and tahina, fatoush, baba ganoush, and some grilled cheese. Their hummus is the absolute best. Our baba ganoush never came…instead we got some mystery dish, which was also good.

Andrew and I shared a shish tawook and JC and Maïte shared some shwerma. So good!

It was fun to get to know JC a little bit, and to visit with Maïte, too. She has a friend who is doing an internship with the head of antiquities, Zahi Hawas, and she got permission to take both JC and Maïte on a VIP tour of the pyramids. It sounded amazing! They got to go inside and see chambers that are usually closed to the public; they even got to go right into the sphinx compound.

We only took a few pictures of the evening. The flash on our camera was a little hyper-active for some reason and every picture we took was at the risk of going permanently blind. Therefore every picture is also a little bit unflattering, but here’s an okay one of me, Rachel, and JC. 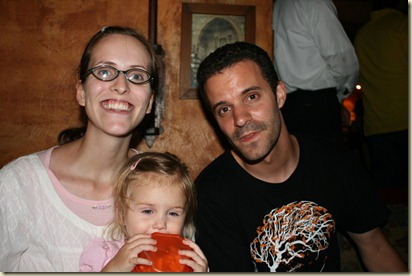 Maïte invited us to join them on a felucca ride after dinner, but it was already 9:00 PM! We would have loved to go, but Rachel didn’t get to bed until after 10:30 as it was. Had we gone on the felucca ride it would have been midnight, if not later!

Instead we said our goodbyes and took the metro home.

We had to do sparklers when we got home, because Rachel knew we had them and wouldn’t let us forget that we promised we could play with them. She’s so good at remembering things like that—too good, really. So we bid the 4th of July farewell by using up a package of sparklers.

Rachel was really excited about it until she learned what they did. 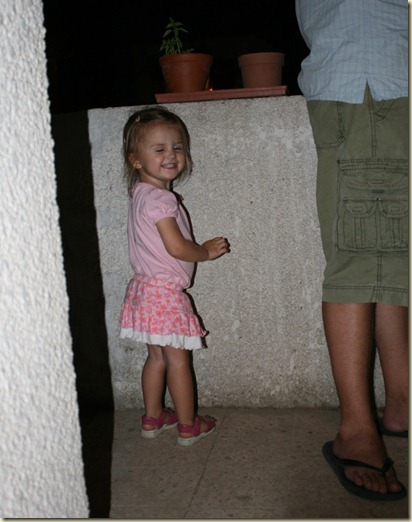 Once she saw that these were no ordinary candles, she screamed and hightailed it out of there as fast as she could so that she could watch from a safer (father) distance. 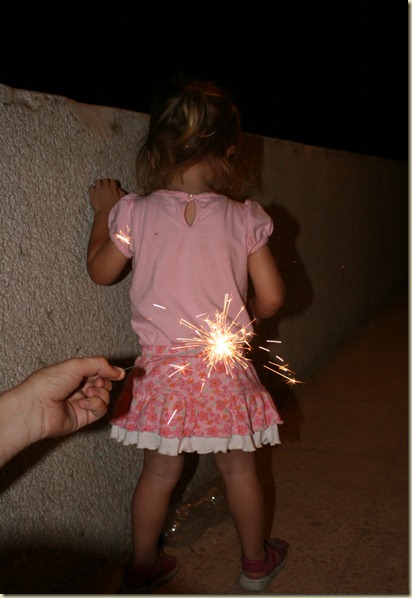 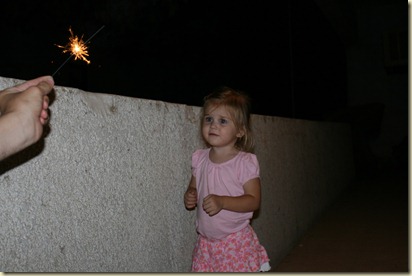 After a few singles, we decided that bedtime would come faster if we used the package of sparklers up faster. That way we wouldn’t have to lie when we said they were all gone to get Rachel to go back inside. Andrew started lighting three and four at a time. 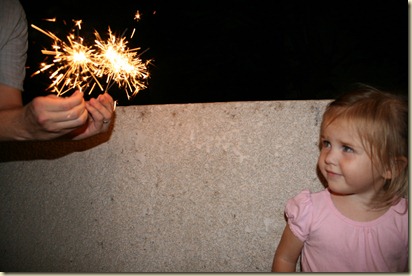 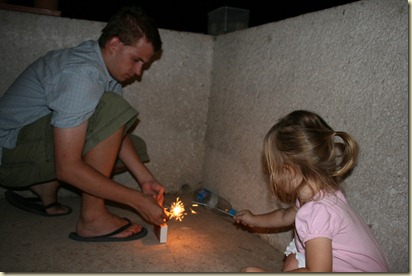 In the end holding a sparkler was still much too scary and so I had to hold it for her. 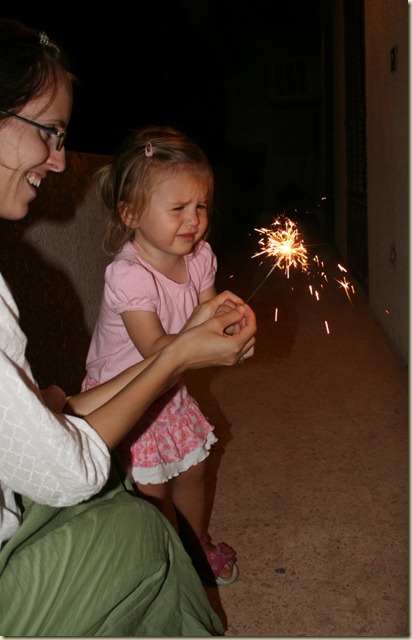 It was fun to get to see a few “fireworks” this July—we’ll be seeing a lot more during Ramadan, I’m sure.