Andrew bugged me all day yesterday about what I was going to do for Flashback Friday but I was a little brain-dead, so I did nothing. Luckily, my brother David wrote a post in my stead. He's such a good brother. His post reminded me of a similar story, though, so now I'm doing a Flashback Saturday. Happy, Andrew?

I'm so lucky to have Andrew, truthfully. I was such a hopeless academic--not that I was hopeless at academics, rather I was hopelessly involved with academics. In other words, I was a nerd. Unlike other young men on BYU campus, Andrew wasn't intimidated by this. I have two theories for why this is.

The first is that Andrew is a hopeless academic, himself. In other words, he's also a nerd. The second theory I have about this is that Andrew missed most of my college years by being on his mission so he didn't know how much of a nerd I was.

Even if he did know all of that, he liked me, anyway. I technically graduated before he got home from his mission...but kept taking classes because how would life be complete without extra Italian, editing, and print design classes? 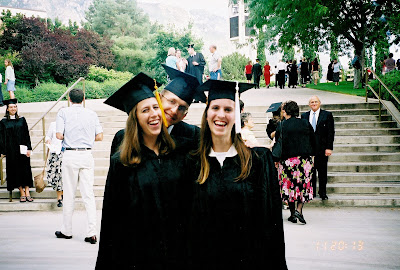 My cousin Michelle, her husband Andy, and me in August 2005

Anyway, there was a time that I lived south of campus, just a 15 minute walk away from the library, which is where I probably spent more time than my own apartment. That, or the JKHB.

I was always on campus by 8 AM at the latest. I always had an 8 o'clock class or work at that time and would usually get to campus early so that I could study a bit. Even though it was a short walk, it involved a rather rigorous walk up a steep hill. In the early morning quiet, I would often see deer grazing in the trees but I didn't think anything of it. Being that close to wildlife didn't really make me nervous. They were deer, for crying out loud, not bears.

One day, though, I decided to head home in the mid afternoon to have some lunch. Usually I had lunch on campus and didn't ever go home in the middle of the day, but this particular day I had forgotten to bring anything to eat or needed to run back home to get something or...I don't know. Something. I had to go home.

I had the hill to myself. No one seemed to be coming or going on campus. I wasn't paying attention to where I was walking and was instead probably going over vocabulary or syntax structures or something while I was walking. I felt a whoosh of air.

I kept walking and studying. I felt another whoosh of air.

I stood as still as possible hoping that deer don't crash into things, especially humans pretending to be trees, very often while they're bounding across paved pedestrian paths. After a few seconds all was clear. I guess the grazing was just better on the other side of the path.

If anything, this cured me of trying to study while walking, giving me half a chance of looking normal sometimes. Maybe that's why I started getting asked out on dates...
Posted by Nancy at 2:44 PM