Inch by inch, row by row

I finally finished the baby blanket I was working on for Miriam. I’ve been working on it for so long! It’s kind of ridiculous. I found the pattern on About.com and thought that because it was called an “easy” baby blanket and was for “beginner crocheters” that it would be right up my alley.

I now think that people who write tutorials for beginners shouldn’t use words like “beginner” and “very easy” because when it isn’t “very easy” it makes the “beginner” feel really stupid.

I’m not even going to tell you how many times I had to unravel and begin again because I don’t even know. Several (dozen) times, probably. It was so depressing.

And then…when I finally figured it out we went to the store to pick up some more yarn to match what I had started. I had a beautiful yellow, pink, and orange variegated yarn that I think is just the prettiest color combination ever…and they don’t have any more of it at the yarn store. They have several skeins of the same yarn in purple and red and blue and green and brown. But not the orange.

To make matters worse, nothing in the store matched any of the colors in the yarn.

I had to choose completely different yarn to work with and it took me forever to even want to make the blanket because I wasn’t okay with that. (I get a little emotional when I’m pregnant, okay?)

But then one day Andrew borrowed the whole set of the Lord of the Rings DVDs from the Houses and insisted that we have a LOTR marathon. I hadn’t ever seen Return of the King and he’s been concerned about that for our whole married life. It was the perfect opportunity to forget myself and get to work.

It’s amazing what you can accomplish during 681 minutes of movie-watching time. Even with all that time dedicated to crocheting (or at least half-dedicated; I did pay attention to the movies, too) I only got half of the blanket finished. 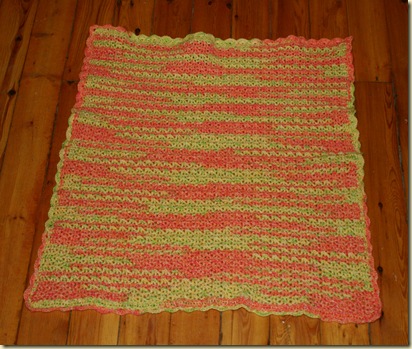 I’m still not convinced that I’m entirely in love with it. It was also a variegated yarn but when it was all balled up it looked like the green and reds were more mixed together. I wasn’t expecting it to look so stripy. I am satisfied with what Andrew calls my “artisanship,” though. I learned a few new stitches and even put the shell border on the outside. And I think it looks a lot better than the last blanket I made (for Rachel). It definitely looks a lot better than the first blanket I made (of which, thankfully, no photographic evidence exists). 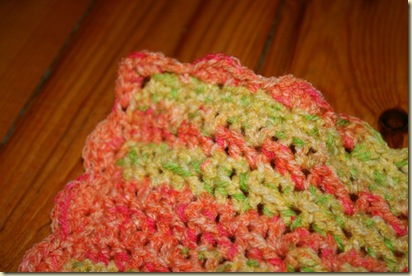 I had to have Andrew read the directions to me while I did the corners.

Logically, yes. But crochet patterns aren’t logical. You almost need a dictionary to decipher them, even when they aren’t written out in shorthand.

I finally finished it this morning and I’m really excited to put it aside and work on other things on my to-do list. Like cleaning my house and decorating a birthday cake for Rachel.

It took forever to finish. It was literally inch by inch and row by row. Every time I picked it up, Rachel would pounce on me.

“What are you doing, Mama? Making rows?”

“Wait until I finish this stitch…” I’d try to get out before she’d climb up on my lap, covering the blanket, “Never mind.”

It was always a miracle when I could finish a whole row at a time. Usually I could only ever squeak in a few stitches. But I’m done.