On our way to the Tueller’s house on Saturday, Andrew spied a little garden on Zamalek and we thought we’d check it out today. It’s just over the Kasr el-Nile Bridge, so we took the metro to Sadat and walked from there because Rachel likes to walk over the Nile.

The park is called Hadiqat el-Gezira (Park of the Island) and costs only 2 LE, which is cheaper than what it costs to get into Al-Azhar Park. We were surprised it was so empty—it’s really quite peaceful, and has plenty of seating in the shade. Al-Azhar has been packed the last few times we’ve been there and the guards have been so nasty. This park was a nice change from that.

It doesn’t have any grass, but at least it’s a place to run around and we got to enjoy a nice view of the Nile. 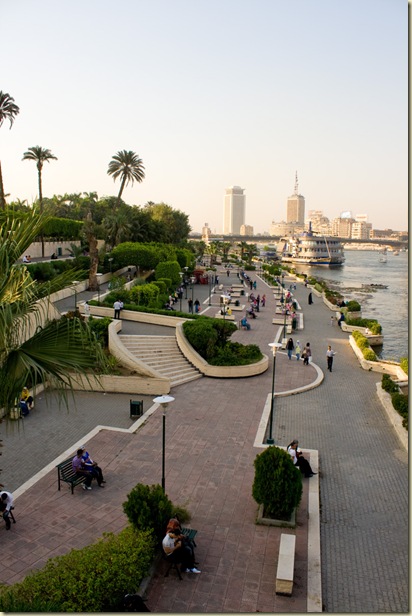 We decided that it would be a nice place to take some 2-year-old portraits of Rachel since we hadn’t gotten around to doing that yet. We still need to try to set up a studio-type thing at home so that we can try to catch a few smiles. She used to be so good about smiling for pictures, but not anymore. The minute we take out the camera she gets all solemn-looking, especially if she’s in an unfamiliar environment. We did get several nice shots, though. 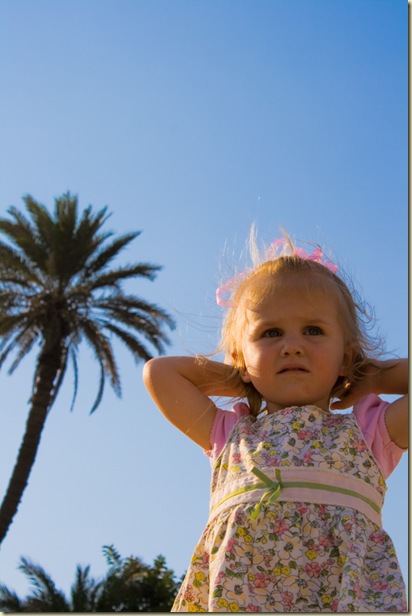 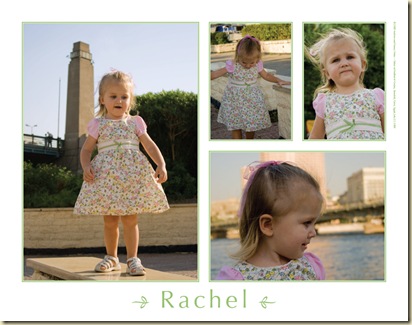 I have serious issues selecting my favorite pictures of Rachel. If I didn’t have Andrew there forcing me to only have four pictures on her birthday collage, I’d probably put several hundred on it. She’s just too sweet.

Some pictures, however, were easier to nix, especially the pee-pee dance one. Somehow I don’t think Rachel would ever forgive me if I put that on a collage celebrating her 2nd year of life. Putting it on the blog? I think she’ll forgive me for that in time.

It’s always appalling to us to see all the garbage floating in the Nile. There was a nice heap of trash stuck in the weeds, right in front of the park. I watched in horror as a mother gave her little boy their empty soda cans and had him throw them into the river instead of into the provided trash cans.

My horror changed into absolute shock when I watched a couple of muhajjabah (women who wear the veil) jump off a fishing boat with a little bare bum baby to take a dip in the Nile. They were right by the trash, almost swimming in it. Granted, it was a fairly hot day and I’m sure the water was refreshingly cool. If it weren’t for my knowledge (and fear) of schistosomiasis I might have joined them, despite the pop cans and scummy residue cresting with each ripple of the current. Maybe. 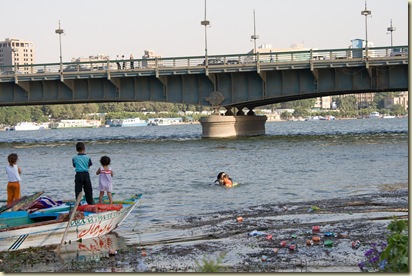 We wondered if we were the only ones that thought they were crazy for swimming in the Nile. We weren’t. There were several other people, including the aforementioned litterers, crowded along the wall, staring in disbelief. 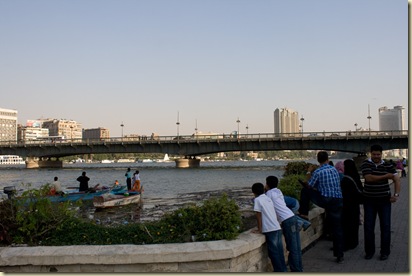 I often wonder how it would be to be a fisherman or farmer living in Cairo. There are a few islands on the Nile, some right by Maadi, that are almost purely a farming/fishing communities. The people divide their time between their dirt-floored houses and their fishing boats, rarely venturing into the bustling metropolis that surrounds them.

We had a girl named Kira stay overnight at our house on Thursday so that she could come to church on Friday morning. She’s living up in Alexandria, studying Arabic on her own and tries to make it down on the weekends for church; it’s quite the trek, though. A few weekends ago she went with some girls in the CASA program to help interview some people inhabiting one of these islands. Most of them seemed to love living there and wouldn’t choose to leave if the opportunity presented itself, at least from what Kira gathered from the conversations she had with the interviewees. They send their youngsters into town to go to school where they sit in real classrooms with glass windows and tiled floors, but most everyone returns to the island to live and raise their families. 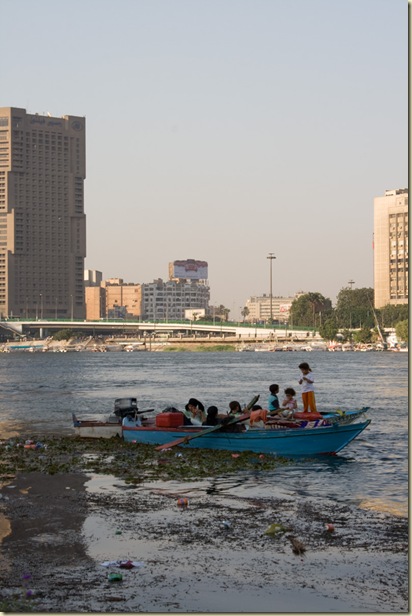 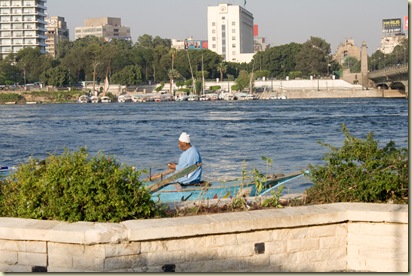 It was interesting to see how comfortable they were with everyone watching them. They didn’t seem to notice that anyone was there and just went on living their merry lives, splashing each other in the water and fiddling with their fishing nets. I’m not sure I’m comfortable enough with myself to act so natural and at ease when I have a whole crowd of people staring at me, less than a stone’s throw away.

Of course, as a foreigner, I do have my share of people staring at me a lot here. I guess it’s something you just get used to. I used to be very uncomfortable having everyone on our metro wagon staring at us, but I really don’t even notice anymore and just go about living my own merry little life.

Eventually Rachel turned on the grumpy machine and so we forked out a few pounds for some snacks and cool water before heading home since it was well past dinner time. We had Rachel run to throw the garbage in the trash can and I noted that several other people used the trash can as well, which I was happy about. I was beginning to worry that Cairenes didn’t know what trash cans are for, but my faith has been restored because obviously some of them do.

We had to stop by the lion statues on our way home, as well. There are four of them that guard the entrance to the bridge, two on either side, and Rachel was quite fascinated by them. Standing close enough to get a picture, however, was a little intimidating for her. 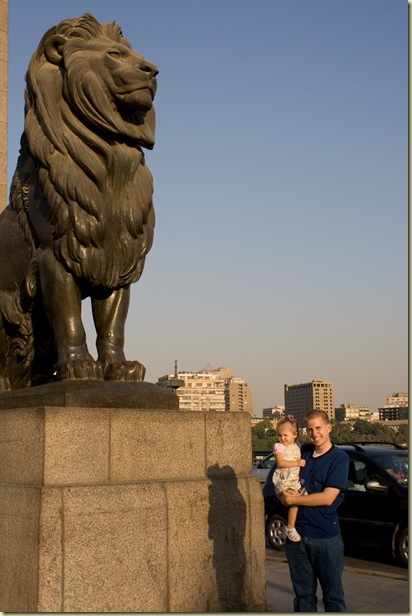 We’re definitely planning on going back again since it’s much easier to get to than Al-Azhar park and is a great way to enjoy the Nile. My dad reminded me on Sunday about my mom’s fear of the water when we mentioned to him that we had planned on taking her out for a felucca ride while she’s here. We figure that if that Nile activity doesn’t work out, a trip to Hadiqat el-Gezira would be a pleasant, more land-based substitute.