Starts with ‘b’ and ends in -reeze

Rachel was gifted some well-loved books from Sam when he moved. I’ve been fixing them up a bit because I’m a bit of a librarian and it breaks my heart to see books, even well-loved books, looking dog-eared. And since I was the head of the conservation diagnostics committee when I worked as a librarian, I decided that I could keep that title in our household.

I spent a few evenings fixing the books up—my waterproofing was done with packing tape, which I realise is against everything that book conservation stands for, but I have limited supplies here!

Oh, and they’re baby books. I fully expect them to wear out by the time we’re finished having children; my goal was simply to make them a little more fun for Rachel now, and for Miriam in the future.

A few weeks ago I drew and attached a new cover for the Curious George book. It’s not perfect, but I think it’s pretty good since I don’t really consider myself and artist, per se, and all I had as a reference was a picture off Amazon.com. 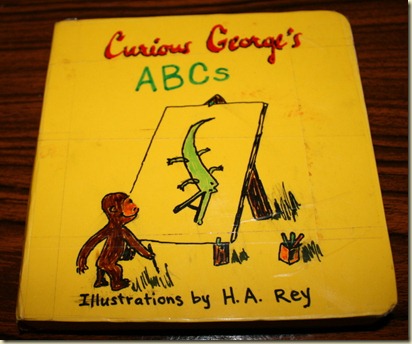 I put off doing Toes, Ears, and Nose for quite a while; I actually hid it on my desk for a few weeks, but Rachel found it and we’ve been reading it a lot lately. I haven’t wanted to fix it yet because it’s a lift-the-flap book and some of the flaps were missing and it just seemed like more work than I wanted to put into it.

Furthermore, we weren’t even sure of what the words were. We thought it was supposed to be a poem, but we couldn’t figure out a rhyming pattern or if there was any sort of canter to the words.

It didn’t help some of the words were printed on flaps that were missing (or partially missing) so we were making things up as we went along.

We agreed on mostly everything that was missing, for example, it was obviously that under the hat were two ears since there were two flaps missing directly above the ears. 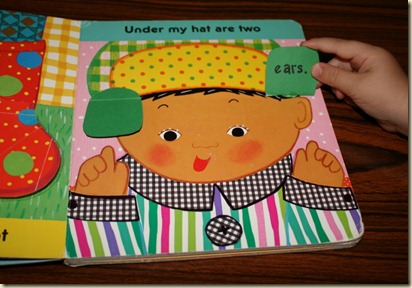 There was one part of the book that Andrew and I always read differently, however.

My blue jeans protect my knees.
My coat protects my back.
And keeps my…

When it came time to fix this flap we had a bit of a debate. I thought we should do what Rachel was used to hearing, so I read it to her and let her fill in the blank. She filled it in with “way,” which proves that I read this particular story to her more often than Andrew.

Clearly, I won (of course I do have the advantage of being home with her all day long, so you shouldn’t feel too bad, Andrew (but you still lose)). But he said that my answer didn’t make sense since the book deals with scarves and mittens and things. His answer was by far the more logical choice. Obviously it was a cold-weather book.

I let him convince me and wrote “cold” down on the flap, but that didn’t seem long enough of a word because the text was supposed to be centered and with plain, old “cold,” it wasn’t.

Air, I wrote down next to cold.

And keeps my belly button out of the cold air. That kind of makes sense. But then I read over the text again.

That just wasn’t working for me, but neither one of us had any idea of what to put in its place.

After putting Rachel to bed I read the book through to myself for the first time, ever. No stopping to lift up flaps, or to count fingers, or to discuss whether the author should have used the word shirt instead of coat (it really bugs Rachel that the word in the story is coat; she thinks it should be shirt; I kind of agree). I just read it through quickly and said the first word that came to my mind.

My blue jeans protect my knees.
My coat protects my back.
And keeps my belly button out of the… 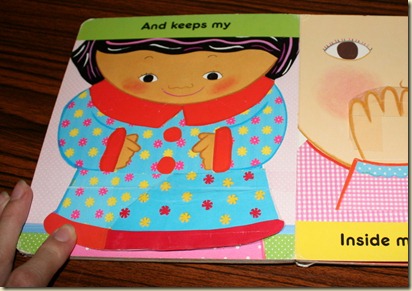 Quick! What rhymes with “knees?” Breeze! 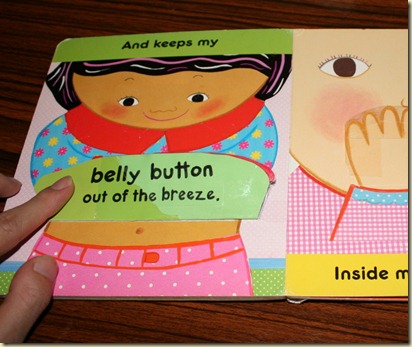 It’s a little embarrassing that it took us so long to find the right word for the story, truthfully. I mean, Andrew is halfway through his master’s degree and I have a bachelor’s degree. You’d think we would be able to think up a word the rhymes with knees. But, no. It took us weeks and weeks to figure this out.

I was actually rather elated when I had my “breeze” epiphany. Looking back, I’m not sure it was completely sane to be that excited over it. The things motherhood does to your brain…