Sleep is more elusive some nights than others. Sometimes on the more elusive nights Daddy ends up in Rachel’s bed because Mommy, too busy with Miriam to check on Rachel herself, asks Daddy to go check on the screaming Rachel, a task he apparently understands as “climb in her bed and go back to sleep.” 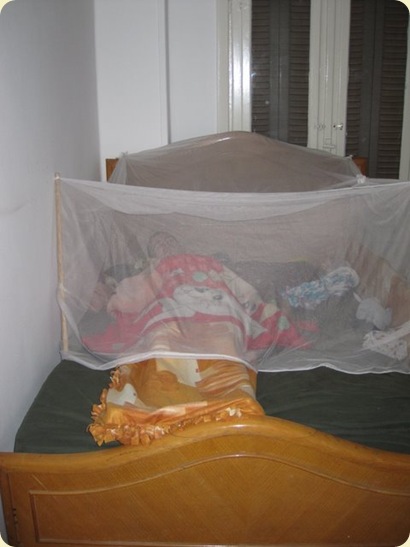 Last night wasn’t a great night. Rachel was out like a light, but she didn’t fall asleep until nearly midnight. 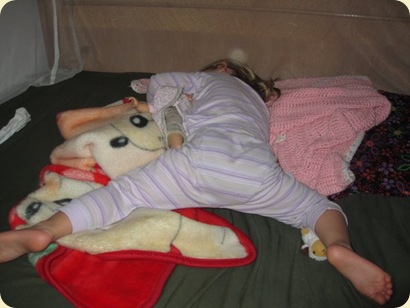 Andrew elbowed me in the nose at around 1:00 (long story*) and then Miriam woke up at 3:30 and Rachel woke up at 4:30 and since my hands were still full of Miriam I had to yell to wake Daddy to get up and check on Rachel who was yelling, “I need go potty! I need go potty!” and then flat-out refused to get out of bed to do so.

Daddy is a difficult person to wake up. He takes a long time to wake up and once he is awake he isn’t very lucid for the first little while. So when Rachel said she didn’t want to go potty Andrew said, “Okay.” Then he tried to get back in bed.

I told him he had to take Miriam and I went in there and forced Rachel to sit on the potty. She told me that she did have to go still but that she didn’t want to get out of bed. I told her that I didn’t care, that when you wake up yelling about needing to go potty you had better make sure you follow through on it.

If she had woken up yelling, “The saber-toothed mice-men stole my cucumber!” I would have let it slide, but yelling out “I need go potty!” is almost akin to yelling, “Fire!” It’s not a phrase to trifle with.

In the end she used her potty and then got to climb back into her nice, warm bed. Miriam insisted on being awake until around 5:30 and then woke up again at 7:30. It was a rough night but I had to get up to go visiting teaching, so after I finished nursing, burping, and pottying Miriam I rolled out of bed and started getting ready to go.

By the time I had processed this information I had already been gone from the bed long enough that Miriam noticed my absence, despite the pillow I had placed snuggly against her tummy to trick her into thinking I was still there, and was calling out for me.

I went back to the bedroom and saw that Andrew was awkwardly struggling to calm her, or so I thought. I had to creep closer to get a better look since I hadn’t put on my glass yet and upon further inspection it turns out he wasn’t really trying to calm the baby at all.

He was simply waving a Kleenex around like white flag of surrender. 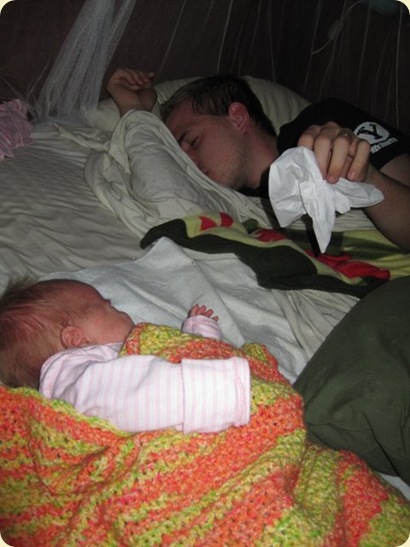 “What are you doing?” I asked.

I ran out to get the camera and he was still waving his silly little Kleenex around, completely oblivious to the squawking baby beside him, when I got back. Well, not completely oblivious since I have a hunch that the whole Kleenex thing started out as a way to pacify her…somehow it must have made sense to him, at least in the beginning.

So I snapped his picture and then crawled back into bed, myself.

He kept on waving his Kleenex around so I forced his arm down and yanked the Kleenex away.

We had breakfast at noon. How pathetic is that?

Tonight should hopefully be better. Rachel was in bed by 9:00 and I haven’t heard a peep, bump, or squeak from her room yet… Miriam will hopefully sleep better so that I can sleep well enough to remember what day of the week it is.

* Andrew was complaining about how resting his arms on the metal trim on his desk hurt his elbows. So I suggested that we get him some elbow pads. So he decided to fake-elbow me in the face but…I’m sure you can all tell where this is going….

…Instead he elbowed me in the face for real, connecting solidly with my nose.

I know he was only trying to fake-elbow me, though, because he said, “WHAM!” and no one says “WHAM!” when they’re trying to elbow someone for real. Right?

“Like in hockey,” he said, as if that summed it up. You know, like I would somehow get what he meant simply because I’m Canadian and he used the word hockey.

“They wear elbow pads so they can elbow people out of their way,” he explained.

“Yeah, but they sure do elbow people a lot…” he observed.

I haven’t been punched in the face for about four years (remember that, Diana?) and I kind of forgot how it feels. It was so kind of Andrew to refresh my memory.

My nose is still a little swollen—it feels like it’s stuffed up, but it’s not, it’s just swollen—and it’s a little purple, but not bad really. I should still be able to milk this for a couple of days at least.

“Honey, my nose hurts. Will you rub my back?”