Miriam, the champion-sleeper, slept from 1:00 AM until around 7:30 AM at which time I forced her awake and begged her to eat before I exploded. My milk supply, though still over abundant, isn’t quite as hyper-active as it was with Rachel which means that I can actually sleep for six hours before I feel like I’m going to explode. It’s kind of nice. Not that I slept for those six hours…

Rachel woke up almost every two hours last night and then came into our room around 8:00 AM. It was nice of her to wait that long because I heard her up and stirring much earlier than that.

I was so tired—I went to take a nap around 11:00 AM and didn’t wake up until 1:30 PM. And then I saw Andrew was online so I started chatting with him.

Andrew: Have you taken your iron? tsk tsk

Andrew: And you should probably eat some food.

me: i ha a sandwich this moeninh

Obviously Andrew’s typos were fake. Unfortunately the only line I purposely mistyped was “don’t maje fum og mu hansi-calp.” It’s blatantly wrong. Everything else was me actually trying to type correctly. My favorite part is Andrew’s botched emoticon and then my “thar.”

I wouldn’t have it any other way, though, because my handicap is the cutest little handicap ever! 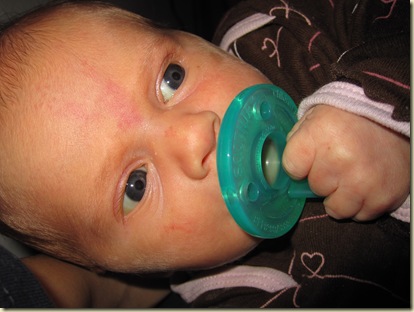