It’s amazing to me how children grasp the concept of time. They start out ignoring any and all attempts to schedule—2 PM sounds just as good as 4 AM. Slowly they begin to understand that dark means sleep and light means awake and it rockets from there.

Rachel understands that she once was littler than she is now and also knows that she’s getting bigger every day. This enables her to talk about both the past and the future in addition to the present.

“After I was a baby…” (alternatively “After when I was a baby…”) is often followed up with “I wored that shirt” or “I played with that toy” or “I spitted up on Mommy, too.”

She’s always talking about her past and future self. It’s cute. It reminds me of when 2-year-old Uncle Patrick told 6-year-old me, “When I was your age I didn’t have to use the stool to reach the sink!” Right…and you know this how?

Perhaps 2-year-olds don’t quite understand time, but it certainly is fun to hear them try.

Yesterday Rachel and I made a little Santa out of a toilet paper roll. We wrapped him in red paper, drew a face for him, and then decorated his suit with cotton. Rachel got really excited when I brought out the cotton.

“Ooooh, r’member when we eated that?” she asked. 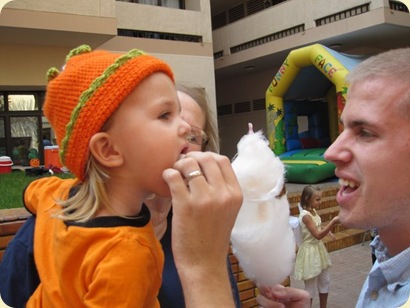 I do. It was a month ago—October 24th—at the Eastin’s Halloween party—the one (and only) time she had cotton candy. And she remembered all about it. I had quite the time convincing her that the cotton we were using for crafts was not only inedible but also rather disgusting.

Then this evening when I was signing her lullabies I started singing Little Star, which was once Auntie Josie’s favorite song (along with The Friendly beasts). Our ward primary put on a pageant of sorts (actually this very one) in 1996 when I was eleven (and cast as a silent angel) and that is when I learned Little Star.

Rachel knows all the words and if I stop singing she’ll fill in for me, but usually she won’t sing along with me. Except that she really likes the word Bethlehem, specifically the last syllable, so she always sings that, without the vowel.

She also really enjoys Christmas Bells for that same reason.

Anyway, at the end of Little Star when Rachel and I had finished saying Bethlehem together she looked up at me and said,

“R’member when we goed there? ‘Member we saw where baby Jesus laid?” 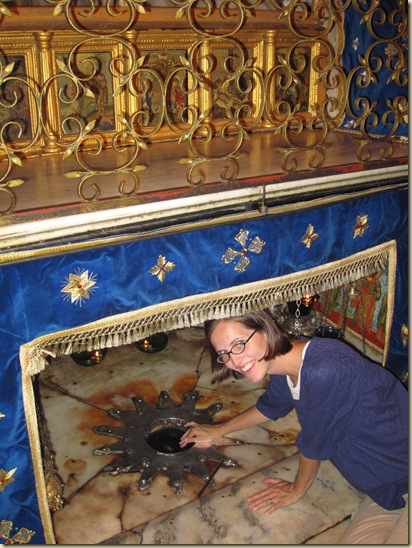 Yes, I do. That was three months ago—August 25—at the Church of the Manger in Bethlehem. Rachel is always talking about our Israel trip.

But what really creeped me out was after Rachel knocked the Christmas tree over on Friday morning right before we had to leave for church (and before it had even been up for twelve hours) she explained (after crying because I “used my voice” on her) that she was only trying to get her ornament off the tree.

“You don’t have any ornaments on the tree,” I told her.

“Yes, I do has one,” she insisted, “R’member when we made them out of play dough? We did that. And I made this one.”

She pointed out the uneven circle that she had, indeed, helped to make last year on December 3rd. 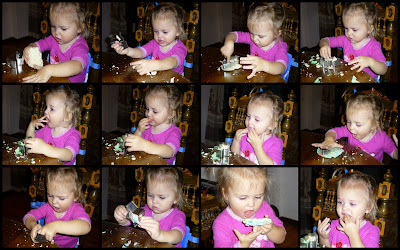 Is it possible that she really remembers that far back?

I think I kind of understand now how my brother David feels when he asks, “How do you remember all this stuff?!”

Not that I didn’t remember the things that Rachel remembered; I’m just amazed that she can remember things that far in the past. She must have inherited my memory.