It’s been 3 weeks…since you looked at me

Last night when I was Skyping with my family, my mom remarked how big Miriam seemed to her. And it’s true—she’s really grown from last week to this. Her cheeks have filled out quite a bit and she’s unfolding more and more which makes her seem so much taller than just a few weeks ago. 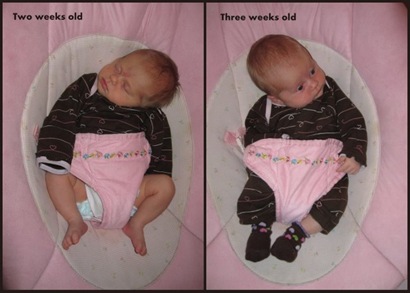 She’s much more alert, sometimes staying awake from midnight until 4:00 AM, which I don’t like. Last night she slept most of the night, though, and she’s been awake for several hours today, so here’s hoping she understands the difference between night and day.

Miriam’s been working on a few new skills, one of them being holding up her head. She doesn’t like tummy time as much as Rachel did but I’m really impressed with her neck strength considering all she did was sleep for the first two weeks of her life. 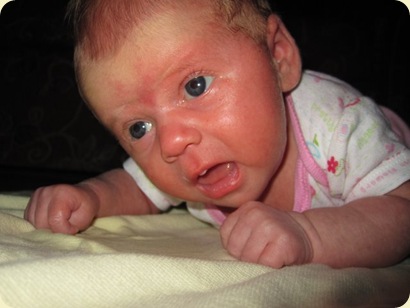 Her favorite thing is to lie down in your arms. If you hold her upright, she’ll throw her bodyweight to one side until you let her lie back down. She’s a cuddle bug, that’s for sure. And she’s still very calm and doesn’t cry much—just grunts and whines. She calms herself down by sucking on her fists, which is an awesome skill, in my opinion. 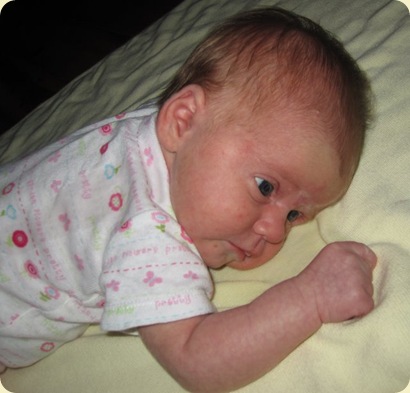 This morning I showed Rachel how to shake a rattle in front of Miriam’s face. Miriam liked the shaking and Rachel liked feeling like she was “playing” with Miriam. We can’t wait for the smiles to start—so far she only smiles in her sleep—and then we’ll really feel like we’re playing!